How to Use the Freeman Small Hive Beetle Trap 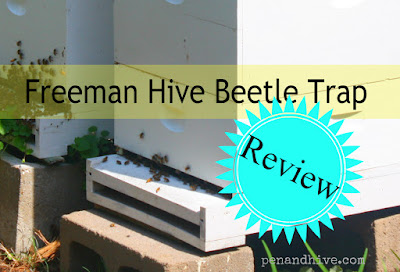 If you have beehives in the American South there is a tiny creature that can strike fear in your heart by it's mere mention, the small hive beetle. These destructive pests can take down an entire hive and ruin a honey crop. The bees can do a fairly good job keeping the situation under control as long as the number of SHB is kept relatively small. The bees do this by a fascinating bit of behavior that basically corralling them and putting them in "jail" as most beekeepers call it.

A few years ago at our meeting of local beekeepers our special speaker was a gentleman named Jerry Freeman who had been working on a trap for keeping the beetles under control. His website even includes plan of how to build the trap yourself if you are so inclined! There had been a few things on the market that operated on the same principle, capturing the beetles in oil, but there were still plenty of places in the hives for the beetles to hide. These pests make the most of cracks, crevices, and ledges within the hive to escape from bees and await your next inspection so while the hive is disrupted they can run around and lay eggs. The larvae are what do the most damage and can ruin your frames of honey and destroy all your and the bees' hard work.

I ordered one of his traps from what is now my absolute favorite company for ordering basic hive parts, Heartwood located in Star, Mississippi. This company won my heart with the friendly and prompt service. I once had a hive swarm and captured them in a cardboard box but needed a hive setup ASAP. I called and placed my order at 4:30 on a Thursday and assumed I'd have to wait until Monday for delivery. My order arrived the next day! It gave my captured swarm a 3 day head start on setting up in their new digs.

The Freeman Hive Beetle Trap has done a fantastic job of keeping those nasty critters under control. I now consider it a part of any hive setup. I wouldn't even think about using a basic bottom board, even a screened one instead. The trap arrives fully assembled. You just remove your old bottom board and replace it with the Freeman Trap, insert the tray and fill it with oil. You can use water and dish soap as well but in the summer heat when you most need it to work it will evaporate in a few days. The oil will last until you change it out.

Nothing makes a southern beekeeper as happy as seeing dozens of small hive beetles floating in the oil. Well, except frame after frame of capped honey that the trap has helped you protect from destruction.

I wasn't compensated in any way for this review. This is just a fantastic product from a wonderful American business that I thought you'd want to know about.

Update: I did hive inspections today in my 4 hives at the neighbor's house. The location is much shadier than the 3 hives in my yard. I hadn't checked the oil in the traps for several weeks and upon inspection today I found the dried up oil in the traps crawling with small hive beetles! My husband washed them out for me while I checked the hives and then I refilled them with water and dish soap because I didn't have any oil on hand. The colonies all seem strong but as beekeepers know opening the hives and allowing the beetles to run wild gives them the opportunity to run around and lay eggs.

Using the trap is only effective if you keep the trays full of oil or soapy water to kill the little buggers when they fall in.

I'll check again in a few days when I replace the water with oil and hopefully the bees are successful with rounding them up.