How to Prune Hydrangeas 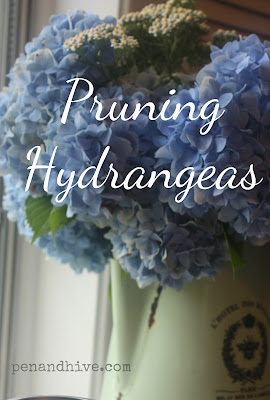 This spring I was visiting a friend and she wanted me to look at her hydrangeas to see why they hadn't bloom the year before and to see if I thought they would bloom this year. She took me to where I expected to see a hydrangea bush and I said "Where is it?"

"There." She said pointing to the ground.

I looked down to see a mound of new growth a few inches high with six or seven dead sticks sticking up. I told her that I hated to tell her but it probably wouldn't bloom this summer either.  I can't tell you how many times I hear this story about hydrangeas and crepe myrtles! Especially when husbands are in fall clean up mode.

Garden clean up does not mean hacking everything down. It means doing what the plant needs to perform its best the following year.

Here is how to prune hydrangeas.

First, you want to know if your hydrangea blooms on old growth or new growth. Ninety percent of home owners have the old fashioned kind that bloom on old growth. You can tell by following a blossom down and checking to see if the stem becomes dark and woody (old growth) or if it is green all the way down (new growth). If you have the new growth variety you can prune any time 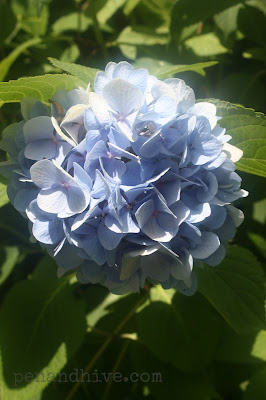 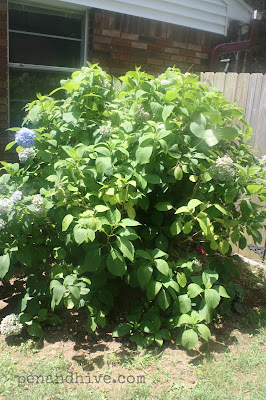 It's important to remember that hydrangeas don't need pruning. But because of their size at maturity, unless you have a large naturalized woodland garden, you are going to want to prune to keep them from overtaking your house. If you don't have much room there are smaller varieties available. When making a plant purchase be sure to see what the size will be at maturity. 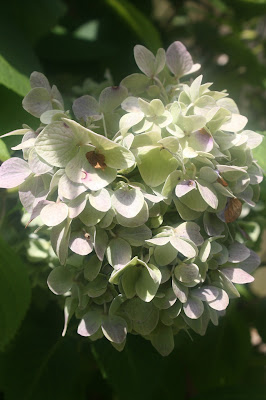 Prune when the majority of blossoms fade. When I pruned mine a couple of weeks ago I noticed that in the mid south it seems to coincide with the crepe myrtles starting to blossom.

Prune after after a soaking rain if you can. I lucked out this year and we just happened to have a day of rain the day before I cut mine back. This is going to help the plant rejuvenate and recover before fall. In the south this can be wishful thinking in summer but its optimal. You can always water, of course.

Prune about 1/3 back. This is a handy guide but if you need to do a bit more to get it under control it's not a problem. 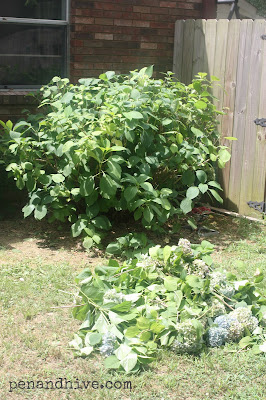 Make cuts just above opposite pairs of leaves. Collect your pruned blossoms to dry if you want. This is also an excellent opportunity to try propagating more plants. I'll cover this in detail at a later date but with something like a hydrangea take several cuttings, stick them in the ground in a shady spot, make sure they get watered during the heat of summer and then forget about them until spring. 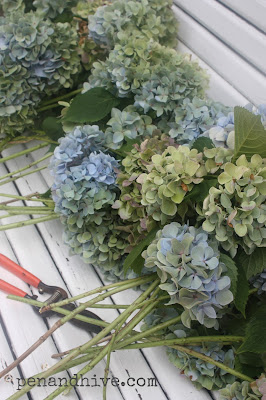 Posted by Michelle @Pen and Hive at 8:00 AM No comments: 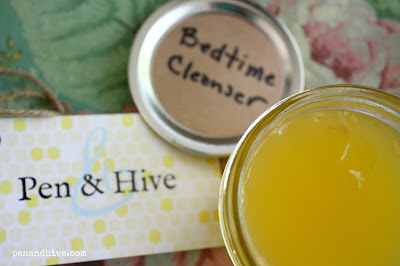 Here's the easiest natural makeup remover and moisturizer in one. Okay, not the easiest because that would just be the oils and no beeswax which works perfectly fine. But you know me I can't leave things alone and adding the beeswax gave it a gel like texture that reminded me of royal jelly.

In this photo you can see the bees building out the honeycomb to store both honey and brood. By the way that big clunky bee in the middle is a drone. This beeswax or comb is what I'm using in my skin care products. Besides adding a thickness and stabilizing qualities it is considered to be antibacterial giving things a longer shelf life and slightly anti-inflammatory which is a nifty quality in anything we are going to put on our skin. 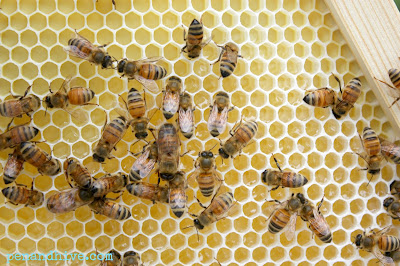 Here's a picture of pure rendered beeswax from my backyard apiary. Read about how I do that in the post, Rendering Beeswax. 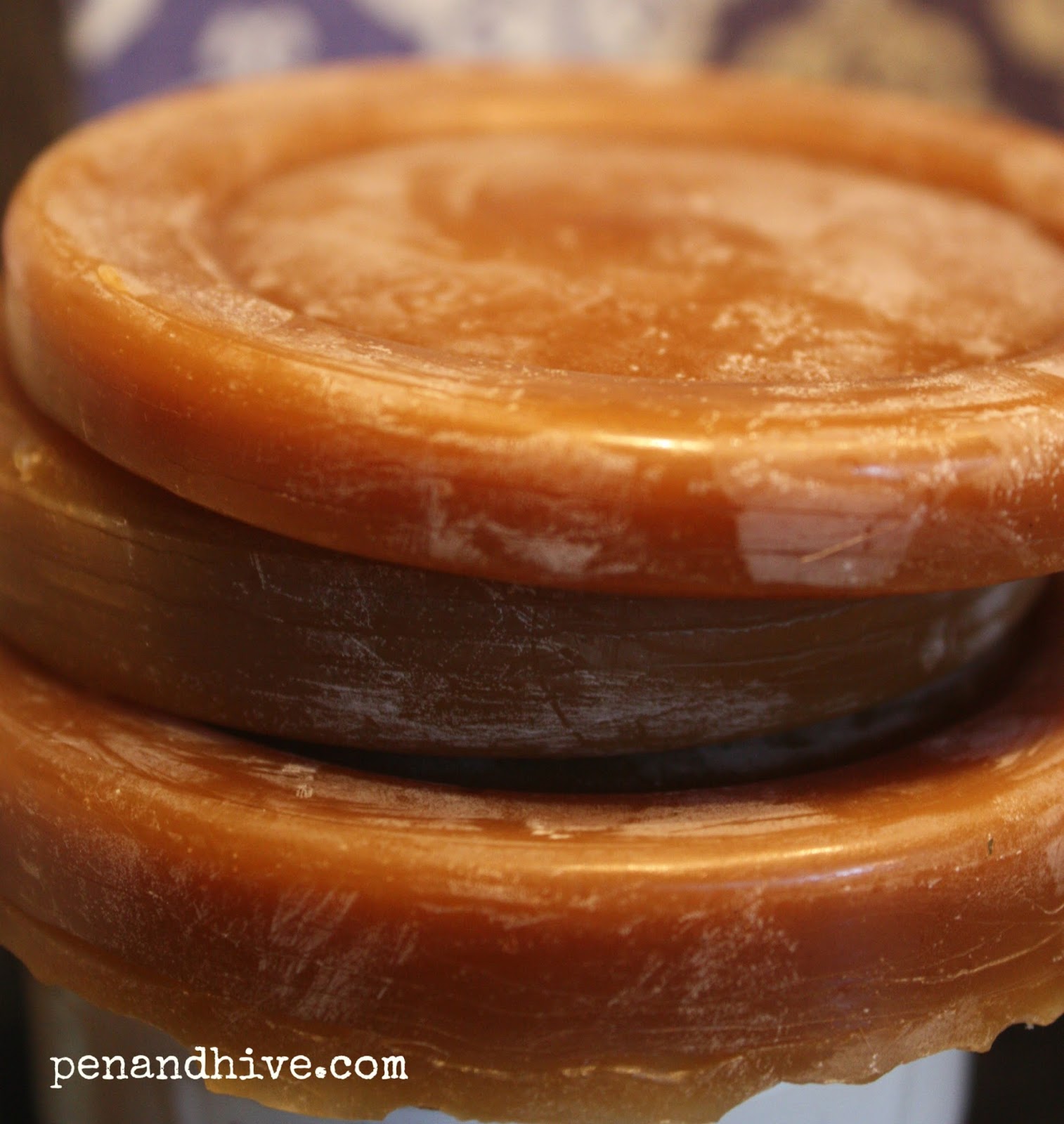 The wax is grated and melted then blended with oils to create countless lotions and creams. These are all quite simple to make in your own kitchen. If you don't have your own bee hives it's really easy to find some beeswax online. 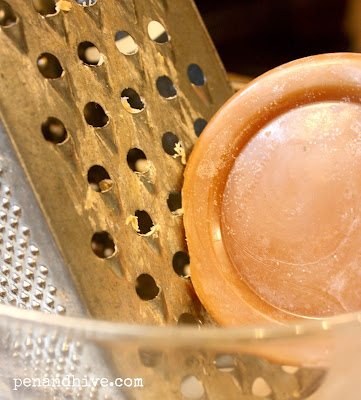 The Bedtime Cleanser is a combination of castor oil, jojoba oil, and beeswax. The oils make a lovely cleanser on their own if you want to mix them up in the palm of your hand in the evening but the addition of beeswax makes it thicker and easier to use. Since it's for use at bedtime I added lavender essential oil which makes it perfect as part of an evening ritual. Massage it into skin to remove make up then rest a warm washcloth on your face for a couple of minutes. Pat off excess oil. 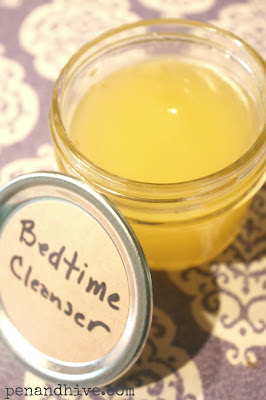 What remains on your skin provides enough moisturizer for the night, at least by my standards, and doesn't feel greasy or heavy.

It's all perfectly simple.

If you are interested in trying out some recipes of your own check Pinterest. If you don't feel comfortable playing without rules there are tons of sites for weights and measures as well as a feast of recipes for your skin.


Let me know what you try and how you like it!

Posted by Michelle @Pen and Hive at 7:57 PM No comments:

The Story of a Russian Map 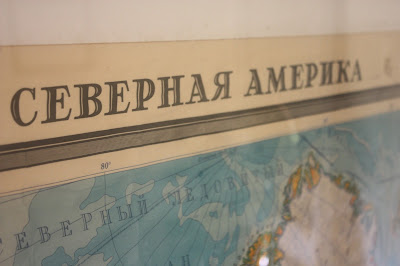 Actually I don't know the story. I wish I did. I'm often drawn to strange and unusual things in antique stores and junk shops. This map was found in a darling Memphis shop, Bingham and Broad. They carry a delightful combination of new handcrafted items, interesting goodies, and vintage must-haves. 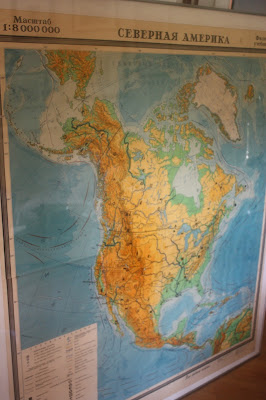 I mean, clearly, a map of all of North America's natural resources published at the height of the cold war in Moscow is a need, not a want. 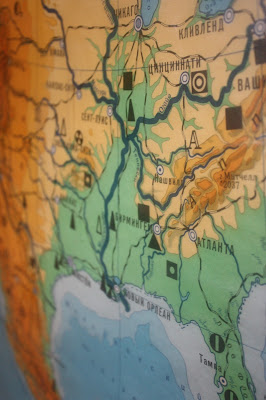 I spotted it at a sidewalk sale and was smitten. Three years ago my husband and I traveled to St. Petersburg with friends. My daughter couldn't understand the appeal. She failed to see why we kept going on and on about the fact that we'd been there.

"Imagine it's 30 years from now and you are going on vacation to Afghanistan or Iran. It's like that."

I stood on the sidewalk in the Memphis humidity on a sunny afternoon and imagined all the rooms and places it would look cool, including over a bed. 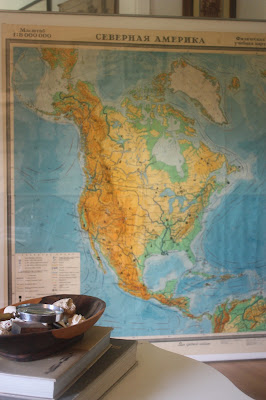 "Mom, I'm pretty sure putting a map of nuclear missile sites over a bed would be terrible feng shui."

I'd wrongly assumed the symbol for radiation was signifying nuclear missile sites or power plants.

I laughed and joked,  "How do you know when the marriage is over? When your wife brings home a map of nuclear missile sites and hangs it over the bed."

Okay, well I wasn't planning on hanging it there anyway. Or buying it at all. I imagined the hipster who had never seen USSR in his social studies book buying it as a conversation piece. I left it there and went home. I tried to forget about it and a few days later while my husband and I were discussing some vintage nautical maps I bought last year, (Okay, I might have a problem) I mentioned it to him.

Really? If you are a wife (or husband) who likes unusual items that others might call junk, you never hear that question. The question you always hear is "What are you going to do with that?"

But apparently I had passed up on something that even my husband thought fascinating.

"Call them tomorrow and see if they still have it. If they do I'll buy it for you."

After all these years that man is still full of surprises.

We picked it up on the way to our daughter and son in law's housewarming party. The next morning I sat in the floor with Google Translate and the map for two hours translating it the best I could. 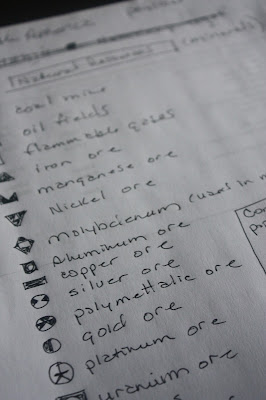 Turns out it isn't a map of our nuclear missile sites but of all our natural resources and major population centers. Here's the best I could do by way of a translation: 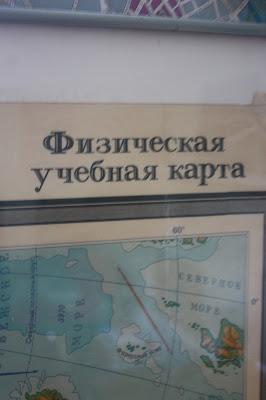 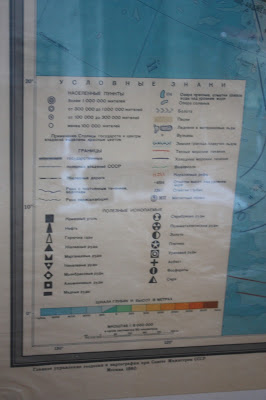 Made by Management Geological Cartographer, USSR Council of Ministers, Moscow 1980

Anyone read and write Russian or have knowledge of Soviet military history? Let me know what you think the map was used for and any translation that is incorrect.

Until then it is by far the most interesting conversation piece we've picked up in a while. And when you are a beekeeper that's saying something.

Posted by Michelle @Pen and Hive at 4:58 PM No comments: