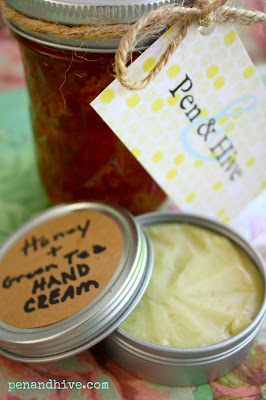 Sometimes I'm a little slow on the uptake. Like while lamenting having my kitchen too messed up to make dinner during the honey harvest last year, I got frustrated.  All that scraping and jarring, jars and lids everywhere, plus labels is a lot to get out and then have to put away at dinner time.

But what else could I do?

You can be so used to thinking about things in a certain way that it's hard for you to get a fresh perspective. I'd only been thinking of our now vacant mother-in-law wing as a possible guest house. Honestly, how had I not thought of it as an extra kitchen for processing honey and whipping up lotions and creams?

I don't know either.

I can decorate it cottage style and it will still be completely available and appropriate for short term guests. Let's review. Remember where we started? 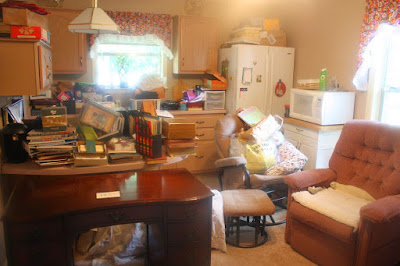 We made a start by clearing all the clutter. It took 3 yard sales and several Craig's List postings. We removed an awkwardly placed cabinet and tore out the impractical island. It did get painted but that's where progress stopped.  Here's what it looks like currently. 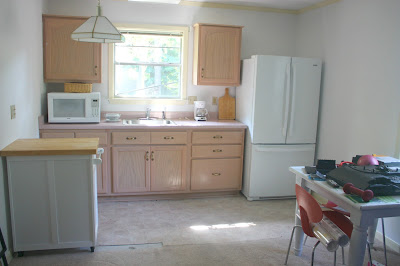 It is a blank canvas that is just crying out to be made adorable! It's amazing what great ideas I'm having while recovering from a shoulder injury that is keeping me from doing much of anything at all. Stay tuned.
Posted by Michelle @Pen and Hive at 12:58 PM No comments: 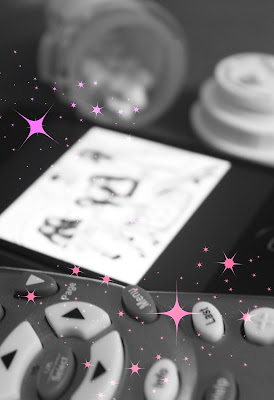 On Saturday afternoon while nursing my injuries I found myself crying with Kris Jenner over the end of her marriage and her coming to terms with losing Bruce Jenner as he transitioned to his new identity as a woman. I wanted to give Kendall a hug and tell Kim I was sorry for all the mean things I'd ever read about her while standing in the line at Kroger.

Bruce's pain felt really real and I noticed that all the designer clothes and Malibu property didn't shield this family from the pain of being human.

Oh my gosh I totally see what Kim sees in Kanye.

Clearly the pain medication for my torn rotator cuff and impingement was working. Nothing hurt. Things were fuzzy and nice. As I iced my shoulder I couldn't believe that I hadn't been watching this show all along. Why was everyone always saying how shallow they were? Who wouldn't get In and Out Burgers and Lipo in the same day? Kentucky Fried Chicken on your way to a nude photo shoot? Sign me up.

Everyone was so genuine and real. Kind of. You know, in that sort of really real way. Pain medication has a way of clarifying things. The steroids I was on killed my appetite. I didn't even want those beautiful cookies on Kloe's island. These are such strong women. I mean, who can live with that kind of temptation? Cookies in a glass container right out in plain sight! I was seriously impressed.

Time for another pain pill. Still wasn't hungry going into hour 4. On Demand is like the best thing ever. I literally cannot remember why I ever watch CNN. What is Anderson Cooper ever even talking about? The news doesn't even make sense the way the Kardashians do. Why were Kim and Kloe trying to talk Kylie out of buying a house? She's seventeen! She totally needs her own house. Even if she had to get something called "rattlesnake fencing" for her dogs.

And Kylie should totally be honest about her lips. I was glad to see her wise older sisters set her straight about that.

I tried to watch a movie but the plot was complicated and I got confused. When did Disney start making docudramas with plot twists about the arctic? Back to the Kardashians.

As the next pain pill kicked in after I decided to skip dinner I realized for the first time what a genius name North is. It's so directional. Like the North Star. She'll never lose her way. North West. I can't believe I ever made fun of it. The new ice pack on my shoulder was having a freezing effect on my brain. There is something clarifying about cold. North. Cold. It was all just making such perfect sense now.

I suddenly thought how much my husband would love these people! I'll bet he'd never seen it. I wondered aloud to the dogs if I should DVR it for daddy. What if he ever wanted to watch it and it wasn't on demand. Maybe it would be better to buy all the seasons on DVD. We could watch them over and over. I'll bet he'd love that.

I'd be sure to ask him when he got home from the golf tournament. I realized I couldn't remember how long he'd been gone or when I took my last pain pill. Or what day it was. Well except that it was Kardashian Day.

What a great idea! They definitely need their own day. Pain pills for everyone!

Posted by Michelle @Pen and Hive at 6:30 AM No comments:

Strong Armed by an Azalea: A Story of Angry Gardening 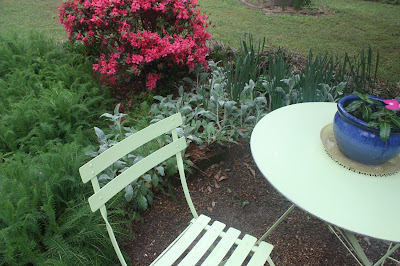 It wasn't my idea to take a week off at my busiest time of the year. But I fought an azalea bush and the azalea bush won. Well, technically I won because that bush did get moved from where I didn't want it to where I did.

I just can't move. And it was six days ago.

I didn't feel the pain all at once but in the process of digging and pulling and chopping then dragging I did think I was going to be really sore the next day. My husband came out to find me covered in mud (filling the hole with water to try and find the roots that were still holding on was a painfully bad idea) and told me to leave it and that he'd help me the next day. When he went back inside I continued digging. I finally lost my temper and exerted most of my energy and all of my good sense in one final effort to extract the shrub. While we were waiting for the doctor the other day he called me stubborn. I don't know where he gets that.

I just want things done and to what extent I'm able I want to be the one to do them. So if I want a garden dug up or the chicken run moved or a room painted I generally just get busy digging, moving, painting. By the time I stop, find some guy's number, call him, get an estimate, schedule the work, and hang up the phone, I could have the thing done.

Well, that's always been my thinking.

Which is why now, instead of a beautiful finished front garden I have patches of mud, weed barrier, and gravel with piles of brick. A symbol of defeat.

When the doctor came in with a resident, I warned him "Do not touch me." He promised he wouldn't.

When I went to bed the night after the azalea episode I thought "I'll be sore tomorrow." I was able to drag myself to bed after showering and collapsed into a deep sleep. But, nothing hurt. Imagine my surprise waking up the next morning in staggering pain and unable to move my right arm. Of course it would be the right one. It took me a while to catch on that something serious had happened. Out of habit, I tried feats of strength like picking up my toothbrush only to find that it caused screaming.

Later I tried to get dressed and there were actual tears and sobbing. By the time I got to the doctor two days later I'd been without sleep for 48 hours. I'd attempted to do my makeup with my left hand. I couldn't get a bra on. The doctor assured me he had no intention of trying to touch me. He prescribed muscle relaxers and steroids.

I stared blankly at him calculating the time between that moment and when I could get to the pharmacy and pick up the pain meds.

"I'm thinking that the gravelly sound you said you've been noticing for a couple of years might be some osteo arthritis. You are going to have to...you know, maybe slow down a bit."

He was treading carefully.

"My thinking has always been if I keep moving I won't get old. I think it's the slowing down that kills you." I countered.

"There's some truth to that. You absolutely want to keep moving but now you have some wear and tear on your joints and you need to back off. Especially on the repetitive motions like in yard work and cleaning. They'll speed up the process."

My husband gave me "the look." You know the one. The one where they have someone else tell you the thing they've been saying.

"But you'll be able to do all the things you want when you recover. Garden and tend to your bees. I just want you to stop trying to kill yourself by doing everything."

More smirking from my husband. I looked at the female resident who was sitting in on the session for some back up. She smiled and nodded in agreement. Three against one.

But in the end the doctor's advice and my husband's willingness to help didn't make much of a difference. Pain. Pain won the day and made its point. It drew some boundaries and pointed out the excruciating consequences of pressing on long after I should stop.

"Do what's good for you or I'll show you who's boss." I can hear it growling at me with a cigar clenched in its teeth. It is not afraid to strong arm me into compliance.

Posted by Michelle @Pen and Hive at 10:21 AM No comments: