Join Me for a 90 Mile March 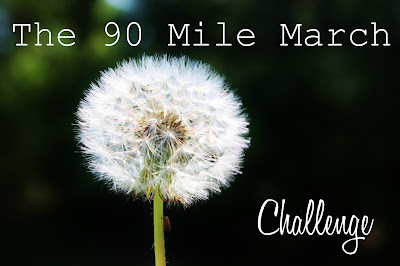 I had such good intentions for the new year. Twenty minutes of cardio every day plus alternate days of lifting weights to tone up those arms for spring, a great core workout, and let's not forget the healthy tweaking of the food I eat to make up for all those holiday cocktails and desserts.

I woke up on January first with strep and pink eye.

A couple of weeks later I tried to get in the groove but I'll be honest, a stack of books, a fire, and a chai are enough to keep me from putting on real shoes any time the weather looks remotely bleak and days are gray.

Here's a whiny post from the last time I did this.

February was more of the same and I fought off two colds but felt pretty worthless for about half the month. For most people February is the resolution killer. But we don't have to let our good intentions die for the entire year just because we got off to a bad start.

January and February are rough. The days are short, the weather is cold. You feel like you have permission to binge on Neftlix. But spring is in the air now and your brain is going to be saying "Let's go outside!"

Which brings us to March. March may actually be a better month to start new healthy habits or pick up ones you've been slacking on than January. It's got the first day of spring. This year it has Easter. What says new beginnings better than spring or redemption for your failures better than Easter?

Fresh starts for everyone!

So here's the plan. I'm going to walk 3 miles a day in March. It has 31 days so it has a one day buffer built in. You saw the title and though I was crazy didn't you? But this is doable. Actually I've done it before.

Read The 5 Things I learned Walking 90 Miles in November here.

Generally in summer I try to do it every day and it isn't that big a deal but anytime you've taken time off and have to begin again, a little jump start challenge is a great way to begin.

And now it's public. That means that on lazy days when I want to stay in my pajamas or busy days when I have a lot on my plate I will be forced to carve out time. A public forum = accountability.

And hopefully encouragement. Read about how I struggled through last time.

If you have been struggling to get back on the fitness train then join me. Maybe you just want to do a mile a day for a 30 mile March. Let me know!

I'll be posting about how it's going. I mean I did a dry January. Walking 3 miles a day should be a piece of cake.

So plot out your 3 miles. At the park. Around your neighborhood. A bunch of laps at the gym.

We'll start keeping score on March 1st. And I'll be posting about how it's going. 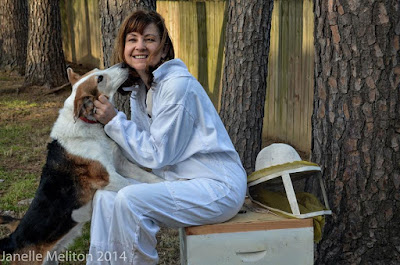 I get a couple of questions from people all the time. The first one is "What in the world made you want to get into beekeeping?" (or some variation in that question) The second is "What's the Pen in Pen & Hive for?"

I'm still trying to figure out the answer to the first question. There's a sort of an answer here. As for the second, The Pen in the title is for writing. Anyone who thinks I'm selling them honey or hand cream or that I am some guru beekeeper with all the answers is missing the larger point of all this. My main goal is sharing information and experiences and stories. Not just about the bees but about life...

I want to inspire you. To care about your food, the bees, and to find that thing in your own life that you are passionate about and pursue it. I'll be sharing more about how I got here and where I hope to go in the future with you in some upcoming posts.

Let's face it, you can buy honey anywhere (not really but that's another post). Even local honey isn't that hard to find. What I'm giving you is a peek inside the hive. It's why I always take my camera to the apiary. I want to give you the opportunity to pry open the mysterious box and peer into the darkness with me amid the buzzing. To smell the smoke mixed with the scent of honey and wax. You might not be able to get that anywhere else.

Beyond that I'd love to share with you what I've learned in the process. About life. About living your creative dream. About chasing something that would make a difference. About the hard days and the magnificent ones. I have heard from several people recently that they miss when I used to write about "everything" I'm pretty sure the stuff I just listed is what they mean.

Are you in? Stick around and keep reading over the rest of the year to share the journey with me. I honestly have no idea what adventures lie ahead but I'd love to share the story of whatever happens with you!

And if you get inspired or encouraged by anything you read here and never buy a single thing from me...well, I'll be thrilled.

Posted by Michelle @Pen and Hive at 8:35 AM No comments: