Videos from the Bee Yard: Fall Honey Harvest in Progress! 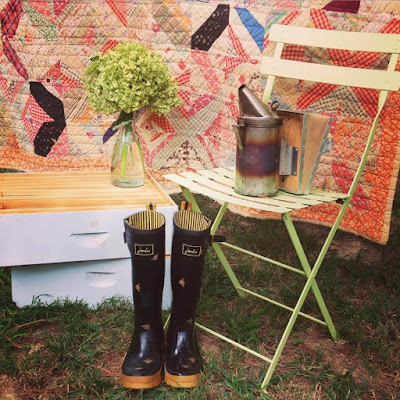 This post is for my fall honey lovers. You know who you are.

The first week in September is definitely the earliest I have ever taken off the fall honey. Usually I leave it on until the middle of October. This year however, our first grandchild is due on October 4th and I am a crazy person trying to get honey extracted and jarred, finishing up projects around the house, and putting the garden to bed. I have a feeling when the baby arrives I am going to be preoccupied for a few weeks.

This week I wanted to bring you into the bee yard as I look in a hive so I made this little video. Which would have been a lot better if I hadn't blocked half the shot with the smoker.

I'll be writing more about why I think I had so many small hive beetles in here in an upcoming post. But the main thing was that every single frame (except the one side of this one I showed you) was filled corner to corner with beautiful capped honey. WOO HOO!

After I took out all of the frames of honey I made another video to explain more about the process.

When I talk about putting the frames back in to let the bees clean it up I only mean temporarily. After they remove all the honey from the processed frames I'll remove them again for winter storage.

1.The board I held up is called a bee escape board.
2. As soon as I push record I can't remember anything.
3. My main goal in this video was to cut off the top of my head so you can't see how badly I need to get my roots done.

How to use the Swiffer "strips" I'm talking about:

Take unscented Swiffer Dust Pads and cut them up into two inch squares.
In the hive place the strips at the corners of the boxes.
Replace as they fill up.

The bees are meticulous and don't like any foreign objects in the hive. As soon as you put the strip in the bees begin chewing them up in an effort to remove them. This makes them very fluffy and fibrous. As the bees chase the small hive beetles into corners to coral them the beetles run into these chewed up pads and get stuck. Every time I open the hives there are dead SHB in these pads. It's a simple and cheap help for the bees.

Next time I'll take you into the guest house and show you how I process the honey. Still probably won't have my roots done though.