Who I'm Listening To Right Now 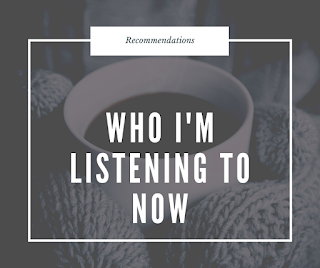 In the midst of the chaos of 2020, I went searching for depth. Around June when I awakened from my Netflix stupor I began with Marcus Aurelius. But I'm weird that way. Don't do that. Unless you know, you are a big fan of reading ancient common sense from brilliant dead Romans.

To be completely honest I did my share of arguing and trolling on social media last fall. It's how I learned that if you are debating communists or college kids who think they're communists, they'll always tell you whatever failed state you want to name with death tolls in the millions weren't "real communism."  It's their universal answer.  They also think having tax-funded roads we all use is the same thing as socialism.

In my quest over the past few months to put all that is happening in perspective and gain a better understanding, I discovered a lot of helpful resources. It may be worth noting that what I consider helpful is generally going to be rational and not given to being over-emotional or one-sided. Overall this list has a liberal, scientific, and/or academic slant. When emotions are so ramped up choosing the calmest voice in the storm seems like the best option.

Scott Adams. Don't know that name right off? How about Dilbert? So yes, at the moment the majority of news I'm consuming is from a cartoonist. But a cartoonist who also happens to have a degree in economics and is a trained hypnotist and expert in persuasion. There's no better way to get your information than from a guy who can point out all the ways the media is using brainwashing techniques instead of reporting the news. He's also a liberal which means that even though he was a Trump supporter you are getting a very unbiased, not to mention entertaining, view of what's happening. His daily (even on Christmas!) Youtube live stream is like having coffee with a really smart friend and discussing the events of the day.

Tim Pool: Another classical liberal, Tim made a name for himself covering the Occupy Wallstreet Protests. He gives the news citing several different sources including social media and his commentary is especially interesting because he's a Millenial. I like to see things from that perspective. He posts multiple times a day and has a live podcast in the evenings generally with other Millenials as his guests.

Jordan Peterson: Dr. Peterson is a clinical psychologist with decades of practical experience. He's a professor at the University of Toronto. He's the author of 12 Rules for Life and the upcoming sequel, 12 More Rules for Life. He has over 500 hours of lectures available on Youtube. More than anyone else I'd say Peterson has helped me to gain some clarity recently and get myself in order.

Bret Weinstein: Dr. Weinstein is a biologist and evolutionary theorist. He gained notoriety during the Evergreen State College protests in 2017. Among other subjects, he talks about the current war against free speech on college campuses. More recently I've discovered his brother, Eric Weinstein, the head of Thiel Capital, and physicist. This pair of brothers coined the term intellectual dark web.

Gad Saad: Professor Saad is an behavioral scientist and author. His podcast, The Saad Truth has the best title of any podcast. He's the author of The Consuming Effect and The Parasitic Mind.

Jonathan Haidt: Author of The Coddling of the American Mind, The Righteous Mind, and The Happiness Hypothesis. He's a professor at New York University. He's challenging us all to overcome our confirmation bias and listen in a deep way we might not have done before. He researches the effects of overprotective parenting and social media access on kids.

Joe Rogan: The number one rated podcast in the world. He's interviewed pretty much everyone at this point and his podcast is a fantastic resource for being introduced to free thinkers and influencers you may not have heard about.

It's called the rational center and it's a place that if the majority of citizens had time to give ideas deep thought and were willing to escape from their information silos and echo chambers we could all meet to construct solutions that work and change that would be worth the effort instead of just a campaign slogan.

Remember when there was news (who, what, when, where, why) instead of a narrative?

What do all these people have in common?  They are advocates for free speech and are loudly sounding the alarm about the very real danger we are in of the First Amendment as we know it becoming a thing of the past. There's plenty to agree and disagree with from all of them, but isn't only listening to people we agree with all the time kind of how we got here?