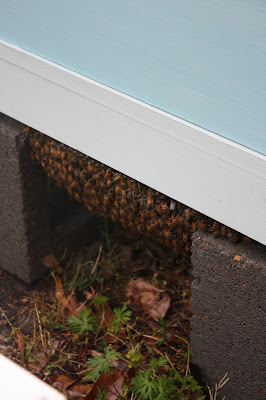 If you missed yesterday's post you can read it here.

As Sunday ended I was feeling like a fairly successful beekeeper. Though in reality this swarm was only retrieved due to the extremely high winds and not really any skills on my part. I headed over to check on how the bees were getting along early the next morning. It was downright cold as the sun came up and so I didn't expect to see any bees outside.

It appeared that all the bees had gone inside to be with their queen. There was a light drizzle and I walked around to look at the next hive which was a split I'd done the other day.

As I came around the front of the swarm hive, my heart sank. 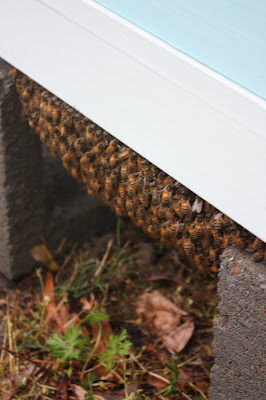 I hadn't captured the queen on the inside of the hive body but apparently she had been underneath the bottom the whole time. That's where the swarm was clustered in the cold. 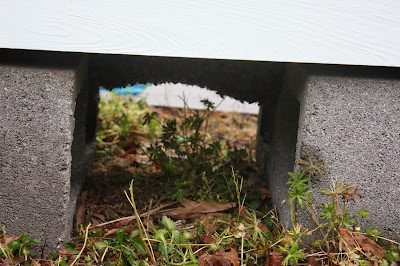 From the very first bee meeting I ever went to it was preached to always have extra equipment. Luckily, this spring I am the most prepared I've ever been but I was picturing the hive I hadn't yet put together and painted. The weather was working in my favor again because I knew that in this rain and cold they were extremely unlikely to leave this spot.

I studied where the bees were. I tried to formulate a plan to hive them. Problem solving is a big part of beekeeping. You spend a lot of time trying to figure out what's going on, what it means, and what you are going to do about it.

When I say "I work for the queen" I'm not kidding.

Tuesday morning was cold but clear. I headed to the new hives early in the morning. Too early as it turned out, but I had nightmares of them flying off into the sunrise at the first opportunity. I set up a new hive a few feet away. Then it was time to get the swarm. I removed the top and honey box. I was hoping to gingerly pick up the bottom board and just shake them into their new home.

I know, aren't I hilarious?

As I lifted the bottom board there were thousands of bees on it but also hundreds and hundreds on the cinder blocks and a large mass fell to the ground. I shook the bottom board with what I had over their new home and quickly placed the lid on top. I carefully moved the cinder blocks over to the front of the hive hoping they'd find their way inside.

Now I had 3 clusters left outside huddled together to stay warm. Finally as the sun rose and fell across them the bees began to move into the space I'd left in the entrance. One by one. I'd have had more luck if I'd waited until the day warmed up.

Patience is not a virtue I possess.

I went home for breakfast and when I returned an hour or so later the bees had all gone inside. In the afternoon when I went to check on them there were 20 or so orienting themselves in front of the hive. 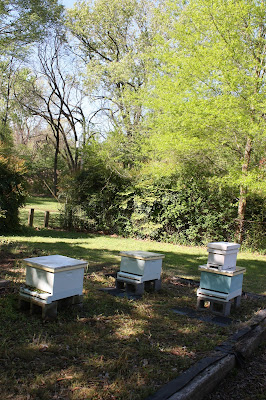 The swarm hive is the one in the front. The two in back are splits I made to prevent swarming from the original hives (which obviously wasn't all that successful). The nuc I mentioned in yesterday's post is on top of the right hive.