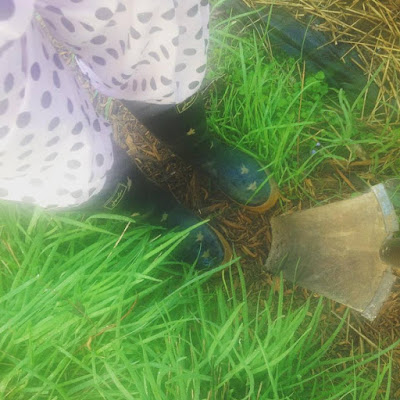 It's spring and there seems to be some kind of compulsion to head to the garden center to buy things to plant. Following winter we can't wait to get outside and get our hands dirty. There is a human urge to dig in the soil. It makes us...happy.

If you are a gardener, or know one, you probably know that they are joyful when they are digging in the dirt. Actually the ones I know just seem to be more upbeat than the general population all the time.  If you thought it was just because gardening was their thing, think again. The real reason might be a little thing called Mycobacterium vaccae.

It's a soil microbe that is inhaled when digging or tilling that can also be absorbed through the skin. In can also be released and inhaled while walking in the woods. In my case I'm sure I'm also eating a ton of it when I'm in a rush to scarf down some food and get back outside.

Testing seems to show that exposure to it indirectly increases serotonin. For more about the science  behind how it works see the links I've included at the bottom.

Several years ago tests were even done with cancer patients. It didn't prolong life but the studies found that it did improve the quality of life for people. They reported feeling an increase in vitality, cognition, and a decrease in pain.

Our American culture is increasingly removed from the outdoors. Parents are hyper vigilant about keeping children clean (and supervised which is a whole other discussion). We spend an ever increasing amount of our time in cars, buildings, in front of screens, and disconnected from nature. Then wonder why we feel so anxious and overwhelmed.

Ever had a bad day and just longed to step outside whatever building you were in?

By the way, studies also show that just being outside can elevate a person's mood and of course it's a must for those with seasonal depression.

It's kind of fun to imagine the TV commercial:

Is Dirt the New Prozac? DiscoverMagazine.com

Why Gardening is Good for Your Health CNN.com

Do You Need a Nature Prescription? WebMD.com


(Do I really need to tell you that I'm not a doctor or that you need to seek professional help for depression that is severe or ongoing?)
Posted by Michelle @Pen and Hive at 2:17 PM