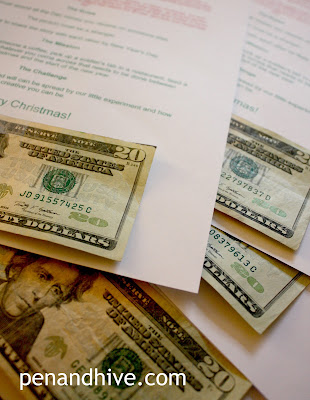 I apologize in advance for how long this post is, but Christmas makes me squishy on the inside and all those feels make me rambly.

Two years ago I started making the last gift I gave at Christmas, cash. And what makes everyone happier than that? Well, as it turns out the answer to that question is spending money on others.

Research shows that we obtain more lasting happiness by giving money away than we do by spending it on ourselves.

My son had an experience at Christmas couple of years ago where a stranger helped him,  I refer to him in the letter I included with the money. You can read it below. Mr. Snarky was taking a bus from Flagstaff to Phoenix to come home for Christmas. The bus broke down in the desert and after waiting 3 hours for help to arrive my son asked the driver to get his bag out for him. He began to walk down the highway pulling his luggage with his thumb out. By his estimate, a hundred or more cars passed him as he grew more and more distraught thinking he'd miss his flight home in time for his sister's graduation from graduate school.

Finally, a guy in a truck pulled up and honked. It was a Native American man named Dan who was headed to a flea market to set up for the day. Jared was hoping someone could get him as far as Pheonix and then he'd figure out the next part. Nothing doing. This guy took my son all the way to the terminal. Mr. Snarky gave him 35 dollars in gas money, made his flight, and was home in time for his sister's graduation the next day. 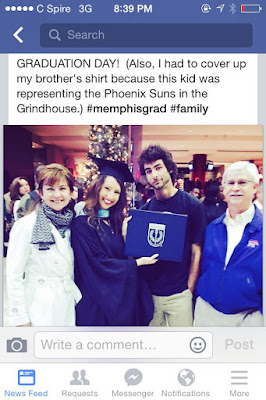 I know if you are a parent all you are getting out of this story is HITCHHIKING!

WHAT HAPPENED TO NOT GETTING IN THE CAR WITH STRANGERS?

When I heard this story about:

A. my son hitchhiking

B. Some kind and generous person with very little who helped him

I should probably explain that my son was working for Americorps at the time and had been camping for 10 days at a time working on trails and when he arrived home he looked...well, like a mountain man. Ok, or a terrorist.

The real miracle is that anybody stopped for him at all. He had cleaned up a lot by the next day as you can see in my daughter's FB post.

That experience sparked the idea for "Dan Money."

Now, I should probably tell you that while my husband, daughter, son-in-law, and son really liked the idea of doing this and starting a new tradition, they thought the letter I attached the money to was cheesy.

So, this is your cheesy warning. Here's the letter:

You may remember that Dan is the guy who made it possible for Jared to get home for Christmas. In honor of Dan, I'm instituting a new holiday tradition in which we honor this guy, who did what was probably a small thing to him but was a huge thing for Jared as he stood on the side of the highway wondering how he could get to the airport in Phoenix.

In future years when this story is told about how Dan saved Uncle Jared's, or Dad's Christmas  I'm sure the story will be laughed at and enjoyed, probably embellished to make it even better, as all good stories are. But I hope there will always be something done by our family for strangers at this time of year in honor of Dan. Who knows? one of you may be someone else's Dan before it's all over, and how cool would that be?

You must spend all the Dan money you receive, on someone else.

The person must be a stranger.

You have to share the story with each other by New Year's Day.

That's it! You can buy someone a coffee, pick up a soldier's tab in a restaurant, feed a homeless person, or whatever you come across that needs to be done between Christmas and the start of the new year.

To see how much holiday good will can be spread by our little experiment and how creative you can be.

Studies show that giving makes us happier so this gift is about making you happier too!

Okay, maybe it is a little cheesy. Everyone seems to be looking for some special opportunity to give so the New Year's Day deadline will probably be revised. And in the future, the amount of money may fluctuate depending on circumstances. I'll let you know what my family does with it.


Has your family created any new traditions or let old ones go? I'd love to hear about them in the comments!
Posted by Michelle @Pen and Hive at 8:45 AM