Finding Home Under all This Stuff 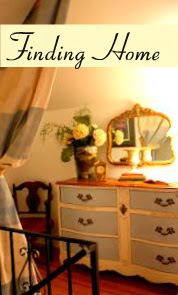 My mother liked to move. She was one of these people who thought that happiness was something "out there" somewhere if you could just get into the right house, or own the right shoes, life would be great. Once we moved across the street in an icy  Kentucky January. I lived in 8 different places by 18. Literally, the last conversation I had with her was about her wanting me to move her again. I had moved her 9 times since I became an adult and there were a few moves she did that I didn't participate in.

My husband, on the other hand, grew up in only two houses and we live in the second one. My children have only lived in two houses and my son moved to the current one at 2 weeks old.

So while I've been purging and cleaning out our family home and doing a fair amount of complaining about how I'm the one who always has to do that, I've also been contemplating what home means. Once these drawers were emptied, for instance, I found that I wanted to store vintage poker chips and cards there. Canasta, anyone? Need binoculars for the horse track? Some of our relatives were leading fun lives. 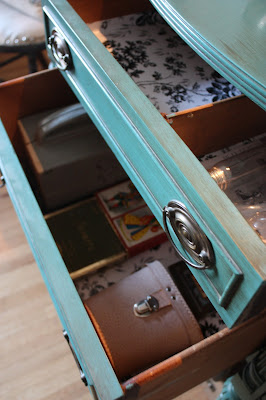 At the moment I'm also doing The Artist's Way with a group of close friends. If you aren't familiar with it, it includes getting in touch with your inner child/artist who was probably stifled somewhere along the way. It brings up a lot of stuff.

I have been remembering being a kid and watching old movies. The ones where the family lives in a big drafty house with ancient pictures on the wall located in a town where everyone knows everyone. I longed for that as a kid. I fantasized about attics full of trunks and family heirlooms.  Basements with clues from the past. Hidden treasures and family secrets. 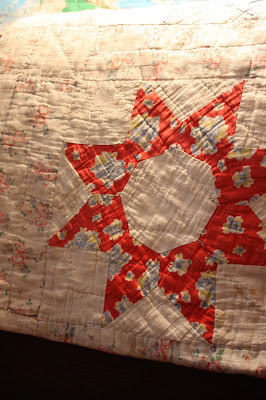 When I had children I wanted them to have that sense of home I never did. I felt like such a good parent covering them with heirloom quilts and saying "Your father used to sleep in this room when he was a boy." You know what my son always wanted to know?

"How come we never get to move?"

Maybe we always want the thing we don't have.

Yes, as a matter of fact, I do need an entire drawer just for vintage maps. 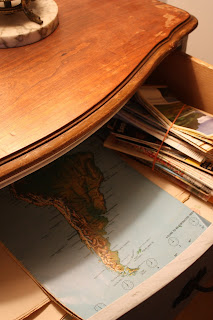 Funny how the Universe has a way of waking you up one day and letting you know it's been doing its job if only you would pay attention. So in the midst of the purging, burning checks and receipts that went back decades, and making trips to the Salvation Army to drop off the things no one wanted, I happened upon some photos. Now I should probably explain that I spent an entire recent Saturday sorting through thousands of pictures. When my children were small I often caved into the request from grandparents to get 3 copies made.

I cannot begin to tell you how happy digital photography makes me. 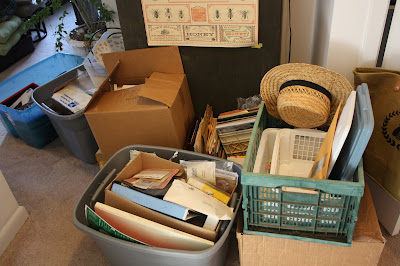 The farther back you go the more interesting the photos get. I even settled a mystery or two, like the name of the place in Daytona my in-laws used to go on vacation. I found two pictures of my father-in-law's football team from 1935 and 36. I found pictures of my own parents I'm not sure I've seen before. 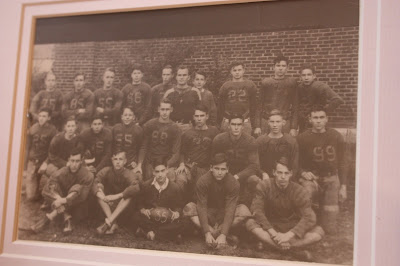 This is how the cottage looked once I emptied the closet. This photo is about half of the actual contents. If you want to see just how far I had come up until this point, read this. 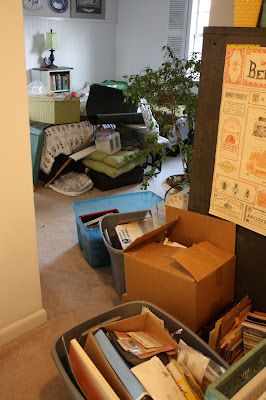 Once it was cleaned out I had room for my Christmas items and rolls of gift wrap inside instead of outside in the shed. Who says you have to put hangers on clothes bars? 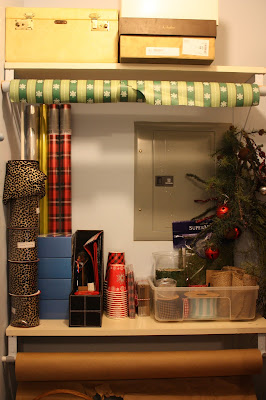 Right down to my own closet, every kitchen cabinet, every pot, pan, and storage container had to defend its right to stay here and take up space. My big red cast iron dutch oven didn't make it. Chipped and worn, after a decade or more of steady use I donated it and replaced it with a shiny new yellow one. A gift to myself for a month of hard work.

Can I just say that putting black and white toile liner paper in empty drawers was on happiness par with chocolate cake? February is the month of repairs and fixes so dealing with scratches and much-needed polishing is on the way. 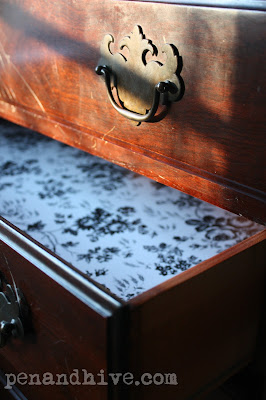 With all the excess gone, the things worth keeping emerged. Home was here all along, under all the superfluous documents and knick knacks. Some things are worth framing, others worth mending, others worth being upcycled into something else. 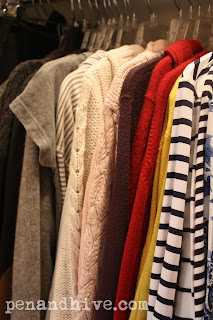 If you have been reading along for a while you might remember previous purges. I had a pretty good handle on things before we inherited everyone else's stuff. But this should be it. After this, pretty much anything cluttering up the joint is my own fault. 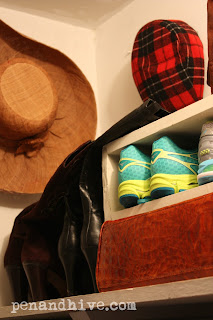 What's the biggest cleanout/organizing challenge you have ever taken on? How did you manage it? How did you feel afterward?