My Morbid Exercise for Purging Clutter 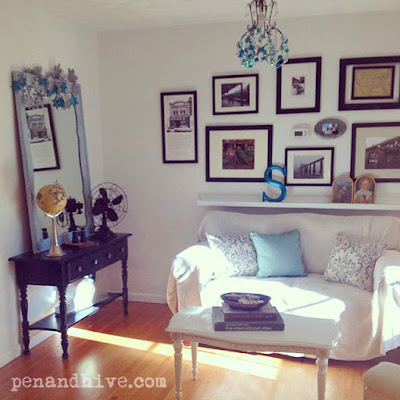 We are at the end of January. How are those resolutions going?

Let me start today's post by saying how grateful I am for all the things that have been given to me. Because what follows might sound as if I'm an ingrate who lacks appreciation for what I have. I promise that isn't the case. Keep reading to see if you can relate.

Okay, y'all. I am having a struggle. An internal one and an external one. I have just spent the month sorting stuff. And I'm not done. Not even MY stuff! If you have been reading this blog over the years you know that I have had 3 relatives pass away and I have been responsible for caring for (read unloading and disposing of) literally mountains of stuff. Clothing. So much clothing. Jewelry. So much jewelry. Dishes. Pots. Pans. Stacks and stacks and stacks of records, documents, and receipts.

I've had estate sales and garage sales until I am quite over it. When my mother moved to a nursing home a couple of years ago I had my sister come and take it all. I just couldn't deal with one more drawer packed full of old bank statements and receipts. We still hadn't dealt with all that stuff from my mother in law. While my mom was the "stick it in a drawer" type, my mother in law was the "create a file folder and keep it forever" type.

My husband and I recently went to visit a friend who was cleaning out his mother's house after she died. So. Much. Stuff. A lot of it was really good stuff and worth keeping or at least putting on Ebay. But he had just about reached that point I was very familiar with where you just can't see the value anymore because you are so overwhelmed.

In the face of too much material abundance, it all starts to look like junk.

Here's a tip: Your kids want you to leave them cash or diamonds and gold.

The cute hat you picked up on vacation and bargained for and makes you happy will mean nothing to them. I know it's sad because when we think about our own things we imagine anyone and everyone would want it.

I mean, our stuff is cool, right?

It's kind of a warped Marie Kondo Method.

I'm that middle generation between the Depression raised kids who had known real want and felt the need to keep everything. Then after the war they became the first generation of consumers. Real consumers in the modern sense of the word where the media and advertising colluded to get our parents to buy. Not just things they actually needed or wanted, but to convince them to buy things they didn't even know they wanted. And buy they did. In mass quantities and then when they got too old to do the marathon shopping they previously engaged in, along came the Home Shopping Network and QVC.

I cannot explain how much anxiety the letters HSN and QVC  cause me.

My mother, and possibly your own, shopped right up until the day she died. I had moved her several times and purged each time only to have her replace it. Spending money she didn't have.

Back to my morbid exercise for purging. I've been trying to imagine how my kids might see my stuff when I'm dead.

If you are just now thinking something might be wrong with me then you are new here.

Are they going to open drawers and say "Why in the world did she keep this?" as I have done a thousand times? I hope not. That's why I'm doing my best to deal with it now.

Our generation is the one that tsunami of material goods is crashing down on. Please don't chide me for being ungrateful for all this material blessing. Guilt is a massive part of having to deal with it. Every item you touch makes you wonder if someone somewhere wouldn't want it or need it. If you save everything for your kids to deal with, guilt is a large part of the emotional baggage they'll inherit. It's definitely a "first world" problem but it is real as you know if you have been there.

My house is still very full. I'm chasing minimalism but it's running super fast and hiding behind my husband who finds comfort in his things. All his things.  Purging in tandem is a struggle. Especially when one person is more attached and sentimental than the other. Though this experience even has him rethinking holding on to so much.

Have you had to deal with a relative's estate or cope with your own accumulation of things? What's your best strategy?

Wondering what I've done with some of it? Read a series about that here.