How I Cared For My Sick Chick This Week 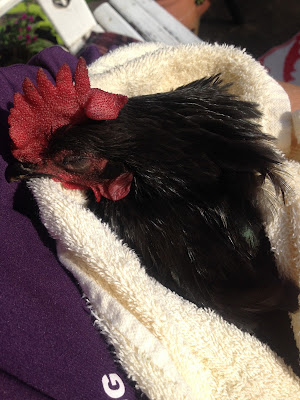 We had a scare this week. Our chicken, Kitty, a black austrolorpe was exhibiting sick behavior. For poultry that generally means standing still, not eating or drinking, and being lethargic. The only other chicken I've had that was sick was eggbound, which is just about the worst thing that can happen to a hen. So I wasn't going to waste any time finding out the cause of the problem.

I'm no expert but most vets in the city don't know that much about chickens and you may be left to figure things out on your own. With that in mind, here's what I did after doing a bit of emergency online research combined with what seemed like a common sense approach. Again, I'm not an expert but here is what I did that worked in our case.

Inspect and clean out the nest. We'd put fresh hay a few days before so the fact that the nest was heavily soiled was a clue to what might be making her feel so bad. I added lemon balm and oregano from the herb garden to the nesting material to keep pests away. I mixed up lavender, oregano, tea tree with witch hazel and put it in a small spray bottle. I thoroughly sprayed the inside of the coop and nesting materials and left the doors open to air out the area and allow sunlight in. One thing I learned from this experience in my research is to use litter instead of straw in the coop.

Catch the chicken. If you have a chicken that doesn't want to be picked up this can be quite an endeavor even if the chicken isn't feeling well. It took me about 15 minutes.

Bath the chicken. I did two baths because the first one was just getting off all the actual filth. A clean chicken is easier to look over and you can also see if anything comes off in the water like pests. At this point I could see that her backside was red and raw much like a diaper rash. Since I had checked the nest I knew that she'd been sitting on a soiled nest. Could that be the main problem?

Soak. After I gave her a bath to get her cleaned up I ran another sink full of warm water and added oregano oil, which is thought to have some healing properties, to the bath. Just a couple of drops. I held her in the water for 10-15 minutes. Only the first couple of minutes were a fight. Obviously wear clothes you don't care about for this entire process!

Dry thoroughly. I wrapped her in a towel and took her outdoors to sit in the swing. The sun was strong and it was warming up to be a hot day so when she was relaxed and sleepy I unwrapped her and let the sun shine on her underside. I wanted her to be completely dry but also felt like the sun would act as a good disinfectant.

Spray with essential oils.  I used the same spray I made for the nesting area on her red and inflamed underside. As I aired her out in the sun I lightly sprayed her with the oil mixture every 5 minutes or so. I have no idea if this helped but it didn't hurt and I was hoping to keep flies away from her. Anyway, it seemed to make us both feel better.

Provide fresh water with a drop or two of oregano oil. I never did really know the exact cause of Kitty's illness. We had recently purchased a new garden hose and there could have been something coating the inside of it. We had noticed foam in the water as we filled the waterers but didn't think much of it until she started feeling ill. The chicken water is now coming from a different source. In addition to changing the water source I added one or two drops of oregano oil to the water which  sites recommended as a natural dewormer and overall immune system booster just in case there were worms or some kind of infection. Again, no idea if this helped but it was a small amount and I thought it was worth a try.

After an hour or so of holding her in the sun and spritzing her with the soothing oil mixture, I let her down to run around the yard. She didn't seem better right away but did eventually drink a lot of water. By evening she was occasionally scratching around the yard though she still didn't eat any feed. She mostly sat in cool shady spots of cool earth which I'm sure felt good against her raw skin.

We only have two chickens right now so I didn't feel the need to isolate this chick. In a more crowded situation isolating her from the flock would be a must.

The next morning, she moved a little slow but drank and ate. I also gave them a bit of watermelon rind to get some extra water in her.  By day 3 I had a chicken that was back to her old self and looking radiant again. 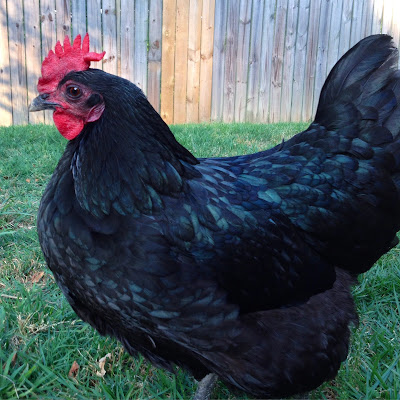 Have you ever had a sick chicken? What did you do?