How we Stumbled Upon an Attic Time Capsule This Week 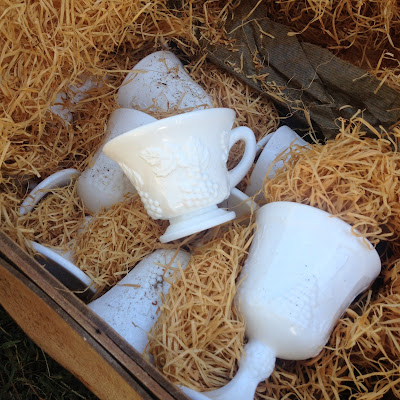 If you are a long time reader you'll remember last year when I gave my house a birthday party. You can read about it here. While lots of houses are way older than ours it isn't all that common these days for a single family to occupy a house that long, especially in the suburbs. My husband moved in to our home with his parents when he was eleven. Our kids were raised here.

Literally the entire 26 years we've lived here I have complained about how much stuff was/is here. I've sorted, donated, yard saled (is that a word?) until I'm on the verge of Minimalism.

Also if you have been reading a while you know I keep saying that (lying about it) while showing you some great vintage thing I just found.

You can read about my struggle here.

Let's just say the Minimalist spirit is willing but the vintage appreciator flesh is weak.

Y'all, I am not even kidding. Read more about it. I know. Like you don't have fascinating problems of your own.

Monday I had planned a whole day of gardening and house cleaning when my husband said "Hey let's get in the attic over the tool shed today and see if we can use any of those screens." Words cannot express how much I didn't want to do this. It's like being asked if you want to clean that gross spot behind the toilet with your last clean dish towel. Over the years I had checked a couple of times to see if any of those screens fit our windows and knew they didn't. But the main reason I didn't want to participate was that I knew that space is a favorite haunt of the occasional rat. It's why I never removed the screens in all the previous shed clean outs and organizations.

We waited until the end of the day when all our other chores were done and we could take showers immediately after. We wore masks and gloves. Frankly I felt that hazmat suits were in order. He handed me one nasty screen after another. Finally they were all laying in the grass and none of them fit any windows in our entire house. But at least they were finally going to the trash can.

Next, he pulled down about 50 paperbacks from the late seventies that were so mildewy they went straight to the trash, but not before we had a good laugh at some of the titles and blurbs.

"I don't know but it's really heavy."

I stepped into the shed and he carefully slid it off the ledge onto his ladder, then handed it down to me. I gingerly rested it on the workbench. It was enormously heavy and a little surge of excitement went through me as I got a look at it. It was from a cousin-in-law and it was shipped from San Francisco to an address my husband's family hadn't lived in for 51 years.

It had never been opened. 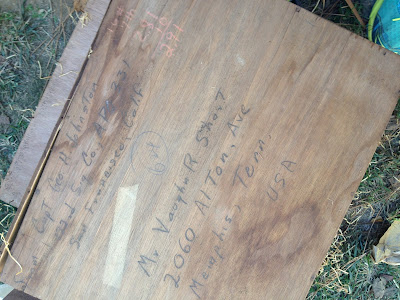 My mind exploded with the possibilities. Gold bricks? Priceless artifacts? A collection of art? I felt giddy. This could be it. The mother lode.

Together we carried it out and placed it on the grass. I grabbed a crowbar. Anything packed in a wooden crate is mysterious. Nailed together. Definitely gold bricks. Was our long lost cousin a rare coin dealer? A cat burgler? Smuggler?

What? These are all plausible scenarios!

My husband pried open the lid. Excelsior! I took this to be a good sign. No one would pack junk in excelsior. My heart raced.

He bent in front of me blocking my view to push back the packing material.

I imagined beautiful china since I had previously discovered complete 12 piece settings in two different patterns.

He held up a cup. 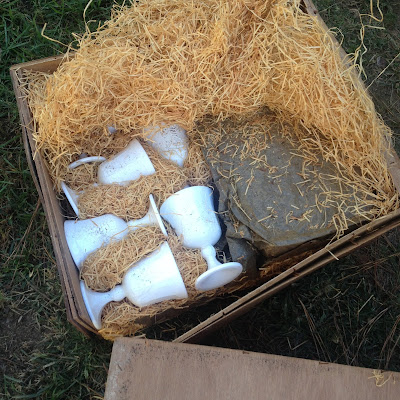 I'll admit to being a little disappointed. It's not my favorite. Why is there never a collection of Blue Willow? Yes, I know --gift horse --blah, blah, blah... 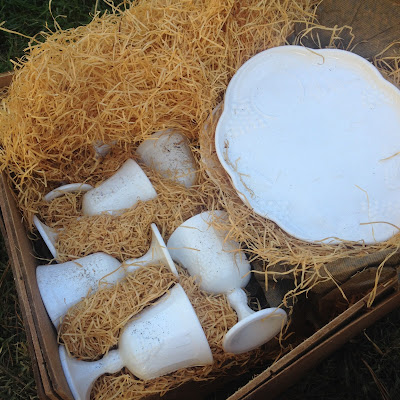 As I unwrapped and counted the plates, compotes, cups, and goblets, he said, "I'm going to get that other box." 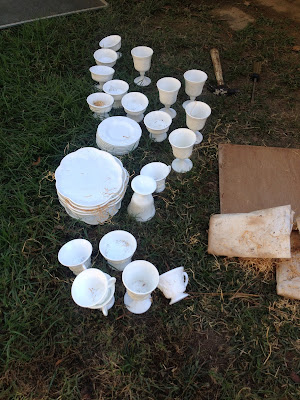 "Oh I just found something you are going to LOVE."

He handed this to me. 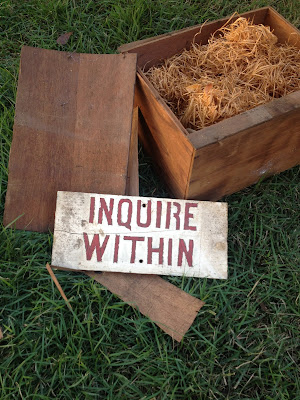 A legit hand made vintage sign! I squealed. Again my imagination ran away and conjured up Spencer Tracy in a hat with a cigar nailing this up at a construction site or gas station. 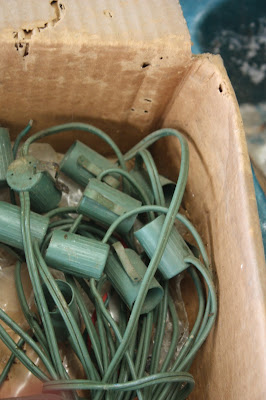 There was a dilapidated phonograph beyond repair, a string of vintage Christmas lights, and a box of mid-century C9 bulbs. The ones in colors they don't make now. Probably because they have some deadly toxin in the color. 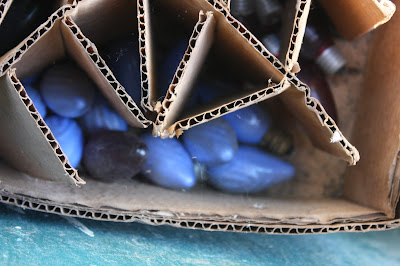 "Hey I remember this..." I heard him say and his voice trailed off down a nostalgic side street. "You are going to be so happy."

He handed me a very large... 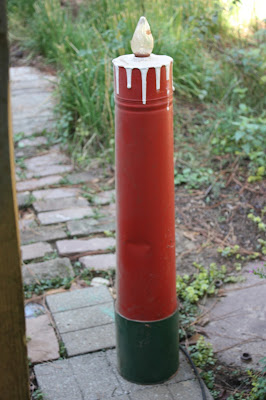 Candle! A Christmas Candle for a front porch! Oh my gosh I hope the neighbors didn't hear me screaming with delight. 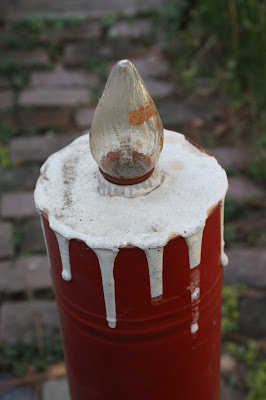 With the attic empty my husband got off the ladder and grabbed an extension cord to plug in the ginormous candle. 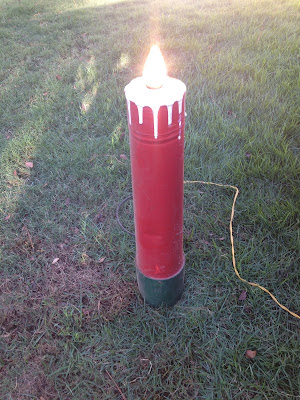 It worked. Things used to do that. Work for a long time. Like 50 years. We both stared in wonder and said "They don't make 'em like that anymore."

Because that's what you do.

Because that's what you do.

All of which has me wondering...

Why was this in the attic over a tool shed? Why did these dishes get shipped and never opened? Why are 3 cups and one goblet missing? Are those pieces what were in the smaller empty box? If not then what was in there? Who made the sign? What was it for?And finally...

What's in the attic of our actual house?

Having your own struggle with STUFF?  Then you might want to read about more treasures I discovered earlier this year and how happy empty drawers can make me here: Finding Home Under All This Stuff