Family Santa Photos: The Next Generation 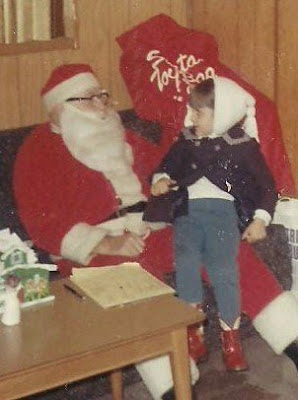 This is me with what use to pass for a Santa back before Santa school, real beards, and Kris Kringles who could make a tidy year's salary between Thanksgiving and Christmas at the mall.  You've got to love the Buddy Holly glasses on him and the red cowgirl boots on me.
Okay, and that Santa is in a trailer with bad wood paneling in the parking lot of a K-Mart. I was a pretty gullible kid seeing as how I didn't wonder why he'd be hanging out there.
I think it helps to focus on the boots...
Is it just me or does time fly faster than Santa's reindeer? When I had my daughter I decided instead of a random pic here or there I was going to have her picture made every year with Santa.

It became an annual tradition and I was nearly obsessive about it. I was determined for my kids to have their pictures made with Santa EVERY year (did I mention that?) until they were 18 or so. It sounded so easy in the beginning. You take the baby, and eventually babies, stand in line, plop them on Santa's lap while some teenage girl in an elf costume tries to get them to smile, snap! Pay here.
Here's your photo... 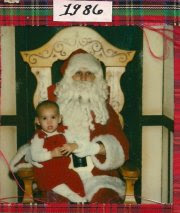 She really wasn't sure about this at all but by the following year she had made up her mind. 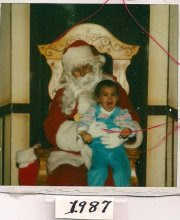 She was terrified of Santa.
Well, the costume is a really bad one, I'll admit. I finally had to tell the photo elf to just take the picture screams and all. 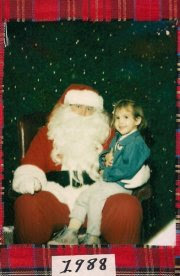 A year later she had discovered HE BRINGS PRESENTS! Well, NOW we are talking.
I'm thinking this was a My Pretty Pony, Cherry Merry Muffin, Care Bear discussion... 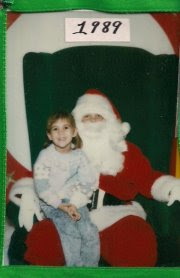 Around this time she realized the whole Santa visit was also a photo op. 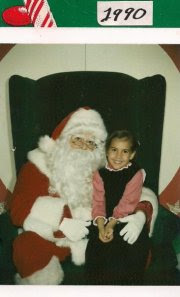 Now she's just working us...and Santa.
She is still VERY good at this. 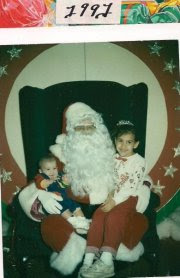 Oh.
Sharing the spotlight.
Bummer.
He can't ask for much, right? 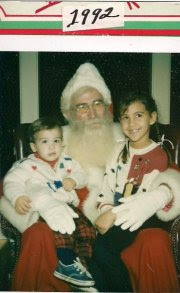 This was the year we discovered a nearly authentic version of Santa. He even had me fooled.
This is my all time favorite.
So precious.
Pigtails. Pigtails, people!
I miss that. 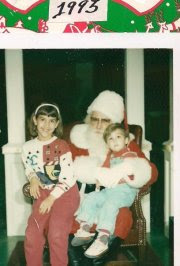 The haughty Mr. Snarky made his first holiday appearance in '93.
His expression sums up his whole attitude.
You gotta problem with that? 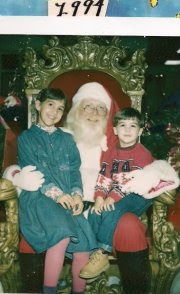 While waiting in a long line for our chance to visit with Mr. Claus Mr. Snarky disappeared. Two parents and two grandparents were looking frantically for him when we heard a man yell "HEY! That's not my kid!" My husband and I exchanged glances that said "No. He would be ours." There he was, sitting on SC's lap with another boy. When we asked him why he cut in line he just said "He's right there, why are we standing around?" 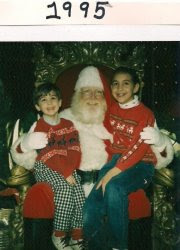 This was the year the malls discovered if they took real photos instead of Polaroids they could charge fifteen dollars instead of two. 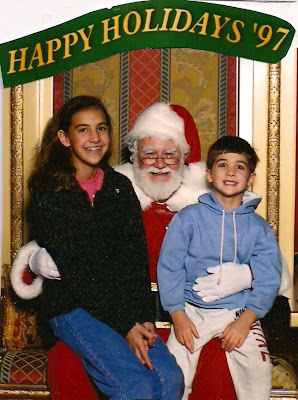 Clearly, in '97 we were just at the mall and I thought "Let's get this over with while we're here." Mr. Snarky is wearing a hand-me-down from his sister with flowers on the lining. The princess is in the braces years, and he is in the full throes of Legomania (symptoms include a crazed facial expression whenever the toy is discussed). 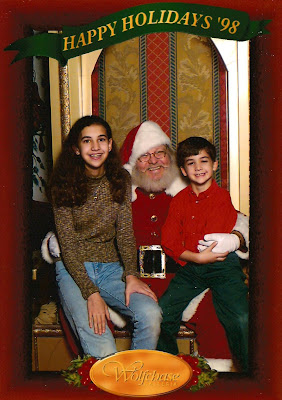 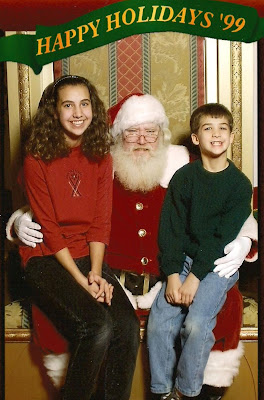 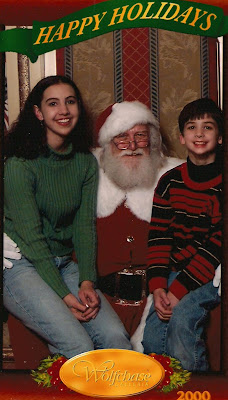 The kids got older, the lists got longer, the Santas got better and the photos got more expensive. 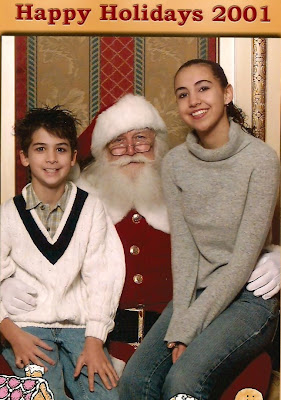 We had just returned from London, where I had wanted to have the Santa photo made but was informed that the kids would have to STAND next to Father Christmas as sitting on his lap was considered...sort of suggestive.
Oh heaven help me, are they kidding? 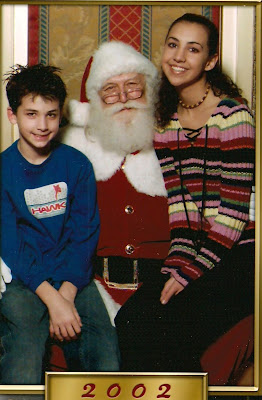 We all especially love this one of Mr. Snarky. I recall him putting up a fight about what he was going to wear. He won but he still pays for it every time this picture is viewed. Revenge might be a long time coming but it is sweet. 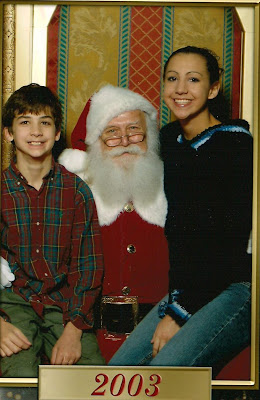 He recovered nicely the next year from whatever was wrong with him, part of which was probably my decision to let him wear whatever he wanted. Clearly, in this picture his sister and I had laid down the fashion law.
The photo above was the last year I insisted they get the photo made. 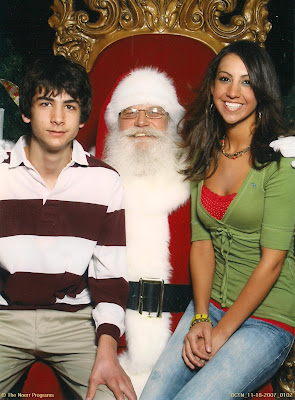 The next two years they missed doing it so much that the following year they went and secretly had it made, framed it and gave it to me for Christmas. There was almost a tear.
Almost.

Did you read last year's post about Dan Money? Because grown up Christmas miracles are a thing.
Want to see the cutest Santa photo ever? . 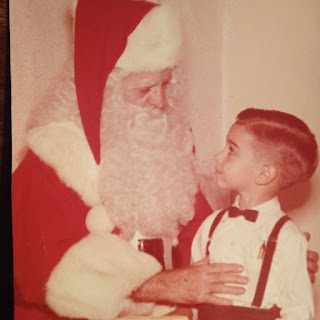 My husband with The Big Guy circa 1960. How cute is that bow tie? My kids are going to relish the difference between their dad looking spiffy at a fine local department store and their mom in cowboy boots in a trailer beside KMart. Let the snarky commentary begin!

Update: If you've been playing along all year on this crazy beekeeping, gardening, traveling journey then you know we have the best Christmas present of all this year and Santa didn't even bring it! Here is my grandson meeting Santa for the very first time. 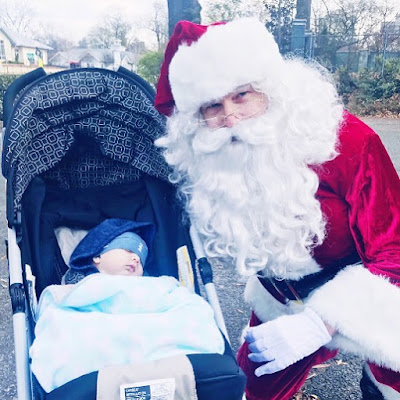 Clearly he's beside himself with excitement. But isn't this fun? 3 Generations of Santa photos! What's the theme of every single thing this year? Cash's first Christmas!
What's your favorite Christmas photo? Share it in the comments. I want to see!