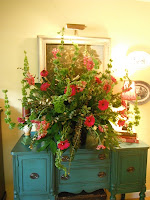 I woke up at 7:00 on Sunday morning. For me that's sleeping late. But just this one day, I gave myself permission to miss the sunrise. And the earth didn't spin off its axis or anything so I may try it again sometime. Not any time soon, mind you. I did the usual: let the dogs out/in, made coffee, sent the border collie out for the paper, gave her a treat and the beagle one for not running out while the door was open. 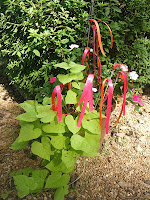 I poured myself a cup of coffee and looked around. The flowers looked prettier in my house than they had at the church. I took stock of what I had. I folded back the aluminum on the big tray and tasted a cold piece of grilled chicken. Not bad. I'd just heat everything up and serve the enormous leftover chocolate covered strawberries for dessert. I had champagne. No orange juice. An oversight of epic proportions when the highlight of brunch was to be mimosas. (I was saved later in the morning by The Food Maven who wanted to know if she could bring anything.) 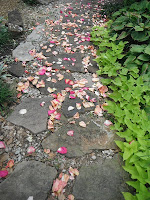 I took my coffee and went outside. It needed something...I grabbed a hundred or so ribbon wands and stuck them in flower pots and on the front door arrangement. I found a bag of rose petals the florist had provided to throw at the couple's going away, but we'd used sparklers instead. I scattered the petals on the walk. I used the rest of the leftover flowers to make arrangements that I placed through the house.


A couple of hours later I had a house full of friendly chatter and a newlywed couple who took great delight in using their new titles.

"Have you seen my WIFE?"

"Did my HUSBAND come through here?"

Could these two be more darling? 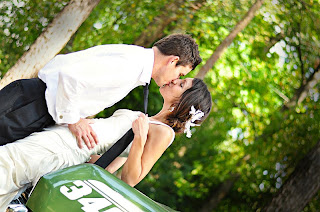 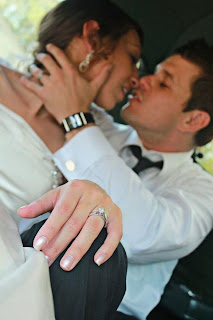 They put on their wedding attire and had planned to go around town to some interesting place to have a photo shoot together since they opted not to see each other before the ceremony. When the photographers showed up they decided to just take the pics at home. They looked around for a places to shoot but I knew exactly what I wanted them to do. The bride's father is the original owner of a 1973 Plymouth Duster which he bought on September 10 (!) when he was a senior in high school. He drove it to his prom and last year our son drove it to his. How many fathers and sons can say they drove the same car to prom? I thought it would have been nice for them to used it to leave the church in but our little bridezilla wouldn't have it. When the photographers saw the car however...


When will everyone realize they should listen to me?

My husband wiped down the car and pulled it into the yard. 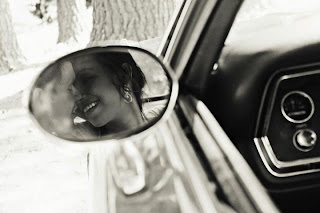 Do you remember the pictures at your wedding? I remember mine. The photographer was some stuffy guy with no imagination who I suspect hadn't shot many weddings before. Funerals, maybe. My daughter's wedding however was shot by a team of 3 photographers who documented every little detail from the rehearsal dinner to the day after photo shoot. My daughter found Becca Yager Photography online and we could not be more pleased at the job they did. Professional and fun they blended in everywhere they went (which was difficult because all 3 of them were gorgeous) and were a blast to work with. I only have a couple of previews to show you but coming in a couple of weeks there will be...ahem... (3 photographers for 3 days?) a LOT of photos. I captured a couple of shots of them at work. 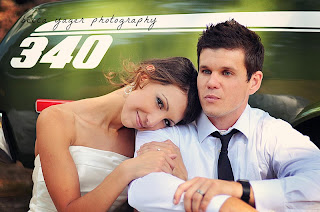 One of the things included in their package was a photo booth at the reception. I learned something about myself. I have a weakness for pink feather boas and having my picture made acting silly with friends. I know! A revelation, right? I don't know if anyone else enjoyed it as much as I did. Maybe they couldn't get to it because I was always there.

Me to the photographer: "Hi it's me again!"

Adorable photographer with a camera as big as she was:  hysterical laughter & bemused eye rolling.

I'm equally excited and concerned about those pictures. Let's just say I was having a really good time.  And apparently it was entertaining to at least one of my daughter's friends.

"Brittany, your mom is photo-rific tonight."

I think that's about the time I was having my picture made with handcuffs holding up a sign that said, "But, Officer..."

Maybe I won't be posting so many of those pictures.
Posted by Michelle @Pen and Hive at 7:48 AM

Email ThisBlogThis!Share to TwitterShare to FacebookShare to Pinterest
Labels: memoirs, Mother of the Bride Chronicles