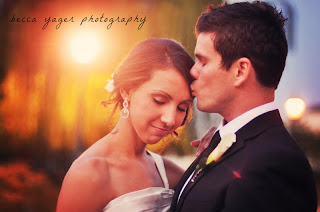 I stood in the doorway arm in arm with the bride's baby brother, who happens to be twenty years old and  6'3". I took a deep breath and looked around. I saw the familiar faces of lifelong friends, team mates and parents from softball days, family. The room radiated with love and the bride and groom hadn't even shown up yet. One day about a month ago when my daughter was saying that she had really wanted a destination wedding I said to her, "That would be nice, but when those doors open at the church all the people who love you and care about you will be in the same room. That won't happen again until your funeral and then you won't be there to enjoy it." I stood in the doorway with my son realizing how right I'd been. I couldn't help thinking that heaven will be much like that. Familiar faces. Permeating love.

Only I probably won't be wearing a push up bra and feathers in my hair.

I made eye contact with as many people as I could on the way to my seat. The super snark in me thought how funny it would be for my son and me to break arms and race each other down the aisle the way we had across so many parking lots over the years...I controlled myself. We took our seats. I kept wondering why I was so calm. My mother hadn't been near me all day so she couldn't have slipped me a Valium the way she had on my own wedding day.  I wasn't nervous or jittery...just ridiculously happy. At twenty-five and thirty-two I had the feeling the bride and groom had enough experience behind them to know what they wanted when they found it. If she hadn't finished college yet, or if I didn't care for him, I may have had a very different reaction.


The bridesmaids and groomsmen came down and took their places to Canon in D followed by Westminster chimes and the entrance of the minister and a very dashing groom. I turned back toward the door...this was the moment I'd been dreading. I was afraid I would forget to stand up, or burst into some kind of maternal hysteria.


On her dad's arm looking glamorous and glowing and confident, as if she did this every day. My husband looked positively stoic! We had suddenly become a Stepford wedding family. Where was the wise cracking mother of the bride?  Where was the emotional, reactionary father? "I'll check the closets after the service," I thought. "Maybe our pods are around somewhere. No. That's Invasion of the..--Oh good grief, I'm running down a list of sci-fi movies in my head--FOCUS!"

I don't think I really need to explain all that happened next. I'm assuming you've been to a wedding. There was the exchange of vows and rings, and the lighting of the unity candle. The minister, who was from their church and had done their premarital counseling added a twist of his own. Near the end he picked up a large crucifix (something that looks very out of place in a Southern Baptist church) and explained that it was a gift for the groom. It was meant to be a reminder that for both people, but especially for men, marriage means a dying to self. "No place else in scripture is anyone commanded to love anyone like Christ loves The Church, except husbands." He had a few more comments along these lines and I was thinking I needed to pick up a crucifix on the way home. Maybe I'd nail it over the front door and point to it when my husband is balancing the checkbook.

Finally, he introduced the new couple for the first time. There were cheers and as they made their way back up the aisle I turned to see a fluttering of pink from the ribbon wands (A tutorial on those is coming too!) I'd spent hours making while watching Mad Men on demand. We made our exit. Next up: pictures,then on to the reception!

Now let me explain something to you if you are planning a wedding...you are going to WORK at a fever pitch with a million thoughts and emotions running through your mind. It goes like this:

"Those pillar candles were expensive, we want to take them with us. Where's my lip gloss? Why is he standing there? Oh thank you, for offering to pull my car around...where are my keys? Um...come with me to the Bride's room...um...where's the key for IT? My feet are starting to hurt. 'Oh yes, we're so glad you could come, head on over to cocktail hour! Where did the bride and groom go? Oh, of course pictures in the courtyard. Who's jeans are these? What time is it? Yes, the new weddings are shorter than they use to be. Our bride and groom didn't want to stand up there while some four minute song played and everyone stared at them. Awkward. Is that everything? Where's my husband? My phone? Thank you for helping...see you at the reception!"


I then drove myself, in a car that smelled like melted wax, perfume, and flowers, around the expressway --which I honestly don't remember at all--to the reception hall. As I turned the corner I could see the pink light emanating from inside. Oh goodness, our little bride is going to LOVE that...as I parked I could see that things were already underway...

Email ThisBlogThis!Share to TwitterShare to FacebookShare to Pinterest
Labels: memoirs, Mother of the Bride Chronicles