The Number One Thing You Can Do To Be Happier Today 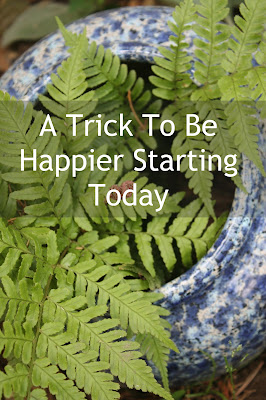 I'm about to share some life changing advice with you. Are you ready?

Did you think I was going to tell you to meditate or do something for someone else? Well those are awesome ideas too and I highly recommend them both. But from what I can see in the culture and what I've noticed in my own life here's a quick and dirty trick to try today when someone cuts you off in traffic.

Think of 5 legitimate reasons someone would be driving like a jerk other than them just being a jerk. Sure you can curse them and call them names and imagine that they also strangle kittens and steal ice cream from little kids.

Question: How does that make you feel? Because here's the thing--  what you think isn't affecting the other driver at all. You, however, are tightening your muscles, clenching your jaw, and increasing your blood pressure.

How differently would you feel if you knew that the driver just found out his teenage son had been in an accident and was on the way to the hospital? Or that his wife is having a baby? Or that he spent 5 extra minutes at home with his kids but that his boss really is a jerk who berates him when he's late?

"But," you may say, "what if he really is a complete jackass and you are just lying to yourself?" Exactly. Either way his impact on you is the same. It's your perception that is making you unhappy, so change it.

This kind of story telling to ourselves builds our capacity for empathy and compassion. In case you haven't been paying attention these are things society and the world is in desperate need of. The fact is that we have no idea why other people do some of the things they do. Assuming the worst only hurts us and damages our health.

We waste a lot of emotional energy taking offense to so much that we could encounter and then move on from. If you want to be calmer, happier, and possibly live longer here's today's take away:

Ask yourself if it matters to you personally.

Will it matter years from now?

Make up the kind of story you'd want someone to think about you when you aren't your best self.

I don't know about you but I need that kind of grace every day. If I want it then I certainly need to be willing to give it. I'm not there yet but I'm working on it.