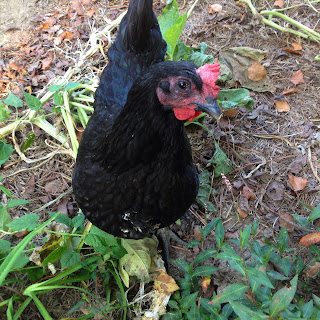 If you follow along on Instagram and Facebook then you already know that we added a new member of the backyard homestead crew over the weekend. And that we named her Kitty.

Kitty is a beautiful 6 month old Black Australorp who laid on her very first morning here. We found her on Craigslist. It's fun to raise them from baby chicks but it's pretty messy and at this point I prefer to let someone else do the hard part. Lady Catherine balked at having a newcomer crowding her space at first but they seem to be getting on very well now.

When I got my first 3 baby chicks I thought it would be fun to name them after characters in Pride and Prejudice. Who doesn't want a chicken run called The Republic of Pemberley?

I started out with Mrs. Bennett, Lizzie, and Jane.
Then we had Charlotte followed by Lady Catherine De Bird.

It's a lot of fun to go out into the yard and call a chicken by that last one. As you can see I'm scraping the bottom of the barrel now. Only Kitty and Lydia were left and I really don't fancy Lydia as a chicken name.

So now we have a chicken named Kitty.

After this I am moving on to Sense and Sensibility. Look for a future Elinor, Marianne, and Margaret.