Acknowledging Your Inner Child as an Artist 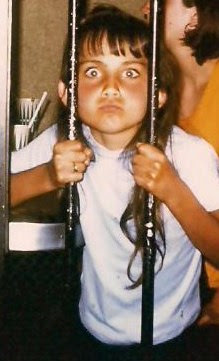 I'm working through The Artist's Way with a close group of friends. In the exercises for week 1, the author wants you to address monsters from your childhood who sought to squash your creativity. I already had the best example all written up so it's getting a repost today.

I was a first-grade rebel. Yeah, that's right you heard me. Let me explain.
I loved pink and yellow together in the first grade.  While coloring a picture of flowers I colored the stems pink and the flowers yellow. The directions said "Color the flowers red and the stems green."

Now I knew what that meant, and what I was supposed to do.

As I sat there I thought " Now I COULD do that but am I going to be influenced by the stifling conformity of a state run institution or am I going to take a stand for artistic freedom?" I passionately picked up my crayons and struck a blow for creativity.

Okay, actually I thought "Red and green are ugly, blech!"

The teacher I had in first grade (whose five-o'clock shadow was worse than Fred Flintstone's and must have had a terrible childhood) often used humiliation as a technique for motivation. After an assignment about following directions, she came to check my work and noticed I had not followed the directions at the top of the page. She walked around the room holding up everyone else's workbooks showing me how they had all done it correctly. "Michelle either cannot read or cannot follow directions" she said loudly to the class while holding up my workbook and glaring at me. I noticed one thing about all the other pages she held up, they were all the SAME. Luckily crayon cannot be erased so even though she gave me a zero I had the satisfaction of making something that made me happy somehow.

To this day seeing pink and yellow together makes me feel like someone is breaking the rules in some delightful way.

A couple of months later the school lunch was tuna salad.

I didn't eat mine and the teacher (a slave to conformity apparently) pointed out to me that ALL the other children were eating theirs. She said she wasn't moving until I ate it.  I did. As she stood over me with a smug look of victory on her face I turned around and threw up on her shoes.

She seemed to like me even less after that (some people can be so sensitive about a little vomit).

I eventually managed to escape from Helga's class by scaling the wall and carefully working my way around razor wire while the dog's nipped at my heels and the guards in the tower shined the spotlight on me.

Fine. The school year ended and I was promoted to the second grade.

This blog is so much cheaper than therapy.

Did someone in your past make you feel as though you couldn't paint, write, build a house or do some other wonderfully creative thing you longed to do? It's very common. Let's hear about it!
Posted by Michelle @Pen and Hive at 9:24 AM