How to Plan 2018 Using Direction and Intention Instead of Goals 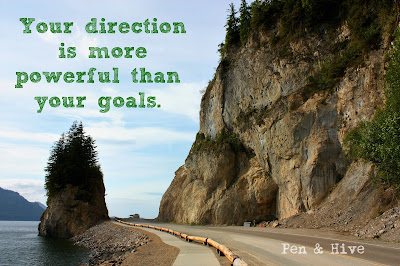 How can we use intention and direction instead of goals in the upcoming year? Goal setting when you don't know what you want can seem impossible. In fact, it can be paralyzing and prevent progress if you think it's the only way to be highly productive. How can you plan if you don't know exactly what the goal is?

To do lists are boring and goals can be intimidating!

There is another way. There is always another way. I've spent my life finding a system that works for me and while I look like a slacker on paper (compared to my super organized over achieving daughter, OMG if goals are your thing don't miss her blog, Organized Charm) people often ask me how I get so much done.

Also, there's nothing wrong with not knowing precisely what you want to accomplish. How am I supposed to know in January what I'll want to accomplish in August? I'm talking to you, planner industry. And it's not just a problem for twenty-somethings. Throughout life you will experience changes that make you say "What now?" Life is full of cross winds and storms. It's useful to know how to adjust your sails.

Enough rambling already, you say? Fine let's get down to it.

I recently got out my planner and looked back over my goals for 2017. I had written down 5 things I wanted to accomplish by the end of the year. Want to guess how many I achieved?

I didn't write that e-book.
I didn't create that product I had in mind.
I didn't make that Youtube series of videos.
I didn't get the Airbnb going in the guest cottage.
I didn't get a piece of writing published in a magazine.

Yep. That's right. Zero. Hooray for failure! If you think that's crazy talk check out this book by Scott Adams.  I had a lot of  positive things happen this year. Just not THOSE things. 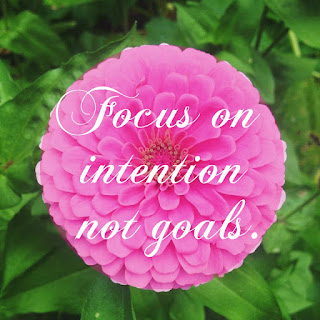 1. Focus on intention or direction, not goals.

When the year kicked off my intention was to move in the direction I wanted to go.

On January 1st I woke up and resigned from a volunteer position on an advisory board for a local retreat center. I knew I was supposed to resign from being a docent at the local art museum as well but it took me until the end of summer to get around to doing that. I wanted to eliminate everything I was spending time on that wasn't going in the same direction. I didn't want to talk about what other people had created. I wanted to create.

The direction was: creativity, beekeeping, gardening. All of which really fall under creativity for me. If it didn't relate to these three I wasn't going to keep doing it. Being serious about intention can be more important than setting specific goals. I suspect this is especially true if you aren't a goal driven Type A personality. If you are a Type B and goals make you uncomfortable or feel like they don't give you enough space for creativity and spontaneity you are my people! .

2. Release excess activities and things to make space to create the life you want.

The most important lesson of the year was that I can create an environment for things to come my way. I know that sounds all woo woo, but creating space in your life for the things you want by eliminating excess actually works. 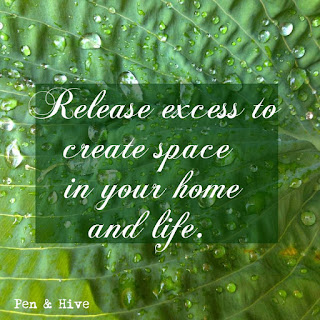 I spent January cleaning out. Everything. Every drawer. Every closet. Every cabinet. It was strange, but as I cleared the space and the air I felt like I was creating room for something good to happen. Read more about that here.

In February I fixed and repaired a number of broken things around the house I hadn't gotten to for some reason or another. The air pulsed with possibilities. Check out Fix-It February.

In March I wrapped up loose ends including scattering my mother's ashes.

As I accomplished each thing it seemed like there was space for new things to happen. And they did. Immediately after the clean out my daughter announced she was expecting. I received an invitation to speak at a luncheon. I started to meet new people and reconnect with old friends. I got offered a chance to do a pop up at my favorite shop and a job offer. Recently I got an offer for a photography gig.

Remember, none of these things were on my goal list for 2017. 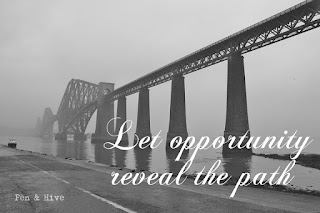 3. Let the opportunity reveal the path.

Yet things I wasn't looking for but secretly wanted found me. New creative doors opened. Opportunities landed in my path. Questions I had were answered.

Now I'm not saying you shouldn't have goals. You should. And you should write them down or post them on a vision board, or whatever works for you. It's great to be deliberate. But don't think you have failed if they aren't achieved exactly as you imagine them. If you aren't goal oriented, then a better plan for you may be an intention and direction. Pruning your obligations. Creating space.

And let's be honest sometimes we don't really know what we want. We have a general idea but lack direction. In that case just do the next right thing. You don't have to see every step or even your destination if you don't have clarity. But move. Forward. I'll bet you have a general direction in mind of where you want to go. Move toward it.

Keep learning and growing and becoming your best self. When you don't know what to work on--work on yourself. For years this was my only real strategy. I didn't know what I wanted to do after the kids left home, so I constantly read and taught myself new things. Years later when things began to happen I was ready.

As the year winds down and we start shopping for planners to lay out strategies for 2018 keep the long game in mind. Ask yourself--what is your ultimate goal? What needs to be eliminated? What does your ideal life look like? Create a vision board that looks like your dream life.

Start taking steps, no matter how small, toward the life you want. You'll be closer than you were before and if you have been around here long you know the drill:


The universe responds to action.