How to Look Entirely Insane at Your Next Garden Club Meeting 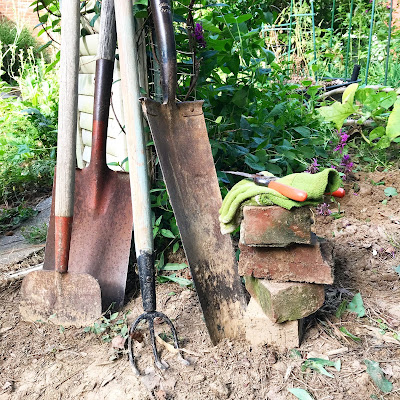 Yes, Y'all. These are the lengths I will go to to avoid pulling up the carpet and linoleum (an inside job!) in the guest cottage. 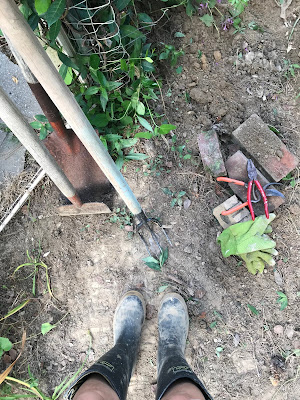 After our last chicken, Fanny, passed away I just couldn't stand the thought of the chicken run laying empty and sad and growing weeds that would surely be enormous by fall. The total garden overhaul started slowly, as most things do." I wonder how this lamp would look on that table" somehow can turn into painting a room and rearranging furniture. Projects have momentum. Or maybe I just have some crazy decorating disease. Let's call it, Well if I'm Going to do That... 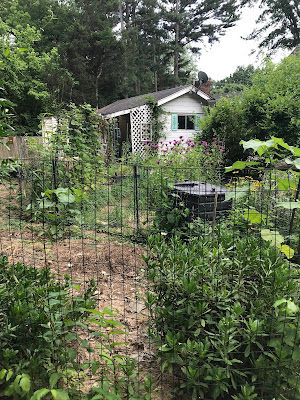 I just thought I'd pull up all the fencing that divided the chicken run from the yard and from the garden. So. Much. Fencing. It was just that temporary kind that comes in rolls and with stakes, you pound into the ground. I did not envision the trees that would take up residence along the fence line when I put the fence up. The massive amount of weeding I thought my backyard needed, disappeared when I pulled up the fence. So satisfying. 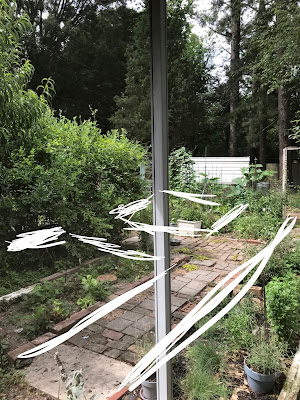 With the fences gone, I could see new possibilities.  It was wildy beautiful the way it was but man was I pining for more order and definition! 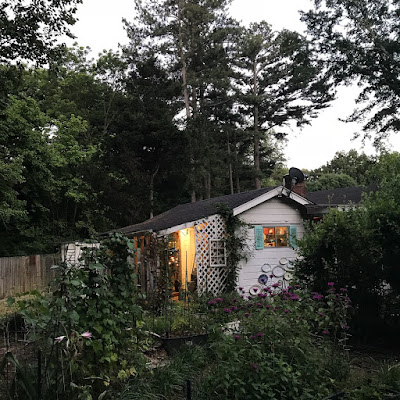 "I mean, for this fall, obviously," I told my husband. I sort of meant it when I said it but already I was feeling itchy for a change. 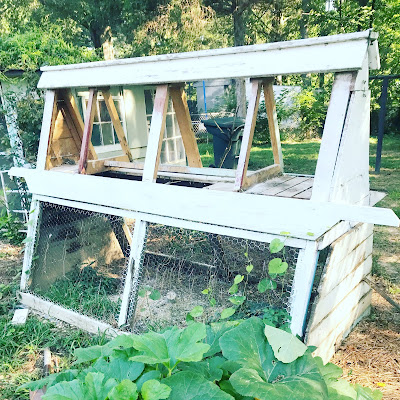 "Would you help me move the chicken coop?"  He did and in my mind, I was envisioning what could be. I stripped it down to the frame and once it was in its new location I primed it. It made me so happy even though the bottom is rotten and needs replacing. I love the idea of having a ruin in the garden. Can't wait to work on this next! 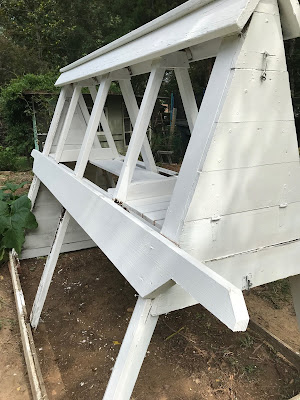 One of the things that had always really bothered me was that the trellis and makeshift gate were off center to my kitchen window and the main part of the path. 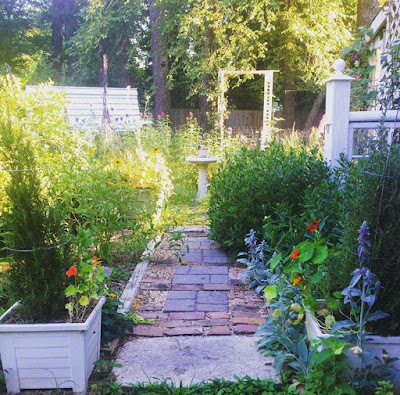 As long as we had chickens it needed to stay where it was. But now... 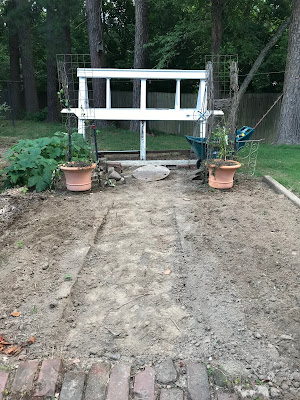 Moving the trellis meant digging up the Confederate Jasmine and Carolina Jessamine beside it. Along with tons of weeds. It also meant finding just the right spot for it. 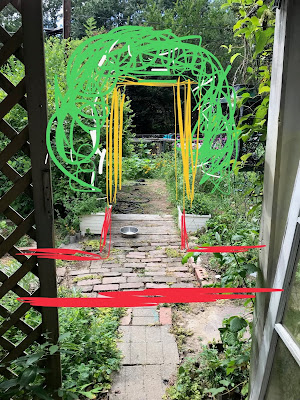 It now sits at the entrance to the bee and flower part of the garden. 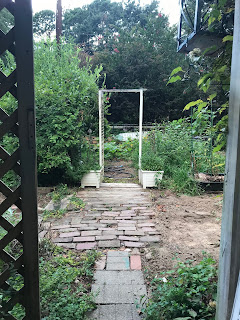 It only took one morning to get the job done. I felt so much better with that major annoyance solved. I cleared out the rest of the weeds over the next couple of days and dug a new path. Then I was looking at the old path. Wouldn't it be nice if they were uniform? You know it would. I'll admit that when I look at this picture now I do think it looks cray cray. 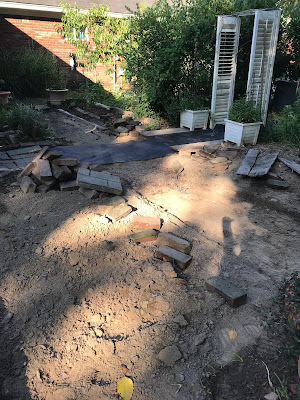 I tore up the old path. At this point, my garden looked like a construction site. 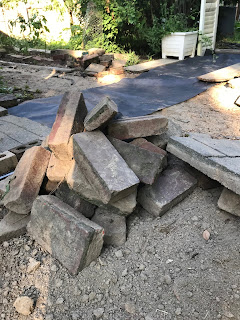 Did I mention my love for reclaimed brick? I've been collecting them for 30 years. 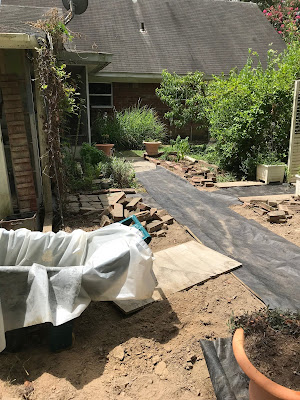 I've had a lot of people ask me how I can work in this heat and humidity. Here's the rundown:

Get up at the crack of dawn and start working.

Work until the sun gets on this area of the garden usually about 11:00.

Take a shower and put on clean clothes, eat, spend the next 7 hours pinning dreamy gardens on Pinterest.

In the evening put work clothes back on and work until dark. Sometimes I wash my work clothes in between shifts because...ew.

Ticks are bad this year and at the times when it's most comfortable to work there are swarms of mosquitos.

I was a normal person the three words would have been: GET SOME HELP. 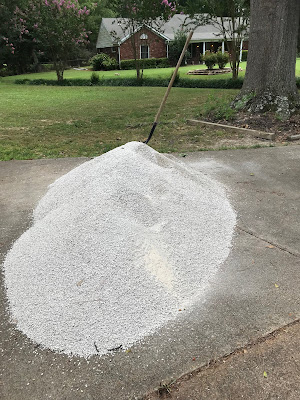 It took me about a week to get ready to order the gravel which arrived on Tuesday and I spent the day moving into the pathways. I still have a long way to go, because of course, I have more ideas!

The gravel (crushed limestone) is from Nature's Earth Products I ordered this over the phone and they offered to deliver it right then! I wasn't ready for a driveway full of gravel but they came the next day. Fantastic customer service and I was surprised at the prices. Why get one ton when you can get two for the same delivery price? 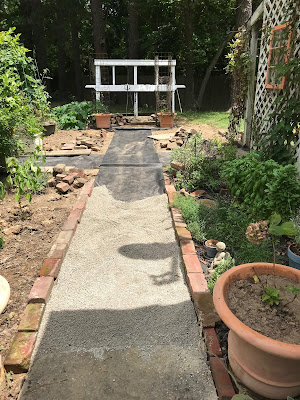 Here's how Phase 1 turned out! I'm super happy about it! 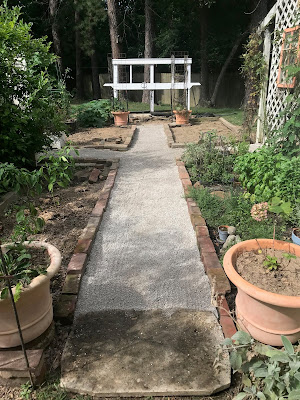 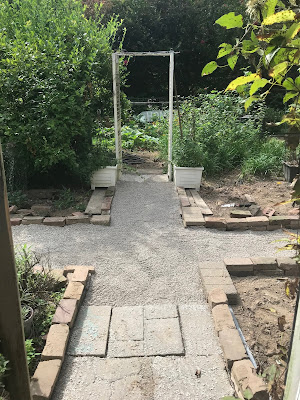 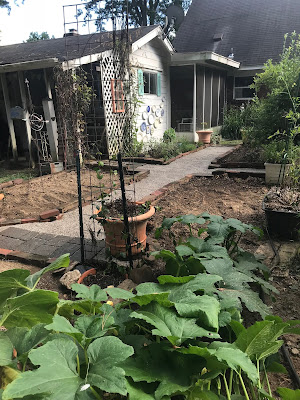 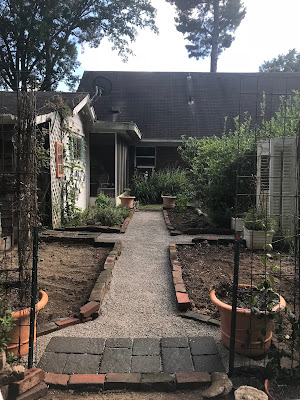 Also, I think I'm going to find a couple of hard-working young men to help me finish the gravel part after recognizing some physical limitations of being 53 yesterday. Yes. I am saying it will take two males half my age to replace me. I felt amazing while I was doing the work on Tuesday but the next morning I had chest pains from my Mitral Valve Prolapse which hasn't happened in several years. I'm going to admit I might have overdone it.