North to Chicago: All Aboard the City of New Orleans 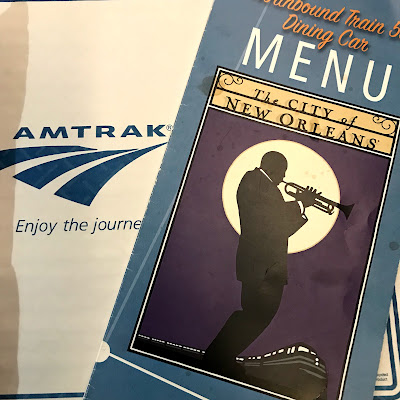 For over thirty years my husband and I have been riding the City of New Orleans from Memphis to New Orleans for football games, cruise departures, and long fun weekends in the Quarter. Last month we finally departed when it was time to go to sleep after catching the train north to Chicago instead of at the crack of dawn traveling southbound. 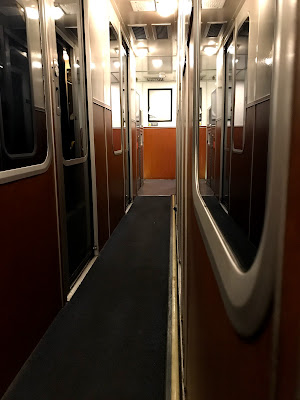 We settled into our roomette which is a private space with a door and a couple of seats that the attendant comes by to magically turn into a couple of bunks complete with sheets, blankets, and a harness looking operation for the top bunk that is supposed to keep the person up there (me)from rolling out onto the floor during the rocking back and forth overnight. If you are claustrophobic fight hard to get the bottom bunk.

When I first got myself settled it felt a bit mildly distressing but I took a moment to think about how exciting and magical my 10-year-old self would have thought it was. Read my post about the strategy of reframing. I remembered how much fun it used to be to hide in small spaces as a kid. I fell asleep in no time and the worst part of the whole thing was having to climb down in the middle of the night to use the bathroom at the end of the hall.

I thought of all the old movies I've seen that had amusing train scenes. Scenes of folks sleeping in berths with just curtains for privacy and using the shared restroom.  I was glad I had some context to put this adventure into. My husband was less amused when I put my foot in his face in the dark at 2 A.M.

When we woke up we headed to breakfast and were seated with a sweet older lady from the Chicago area. I propped my phone up while waiting for our food to catch a time-lapse of the passing Illinois countryside as the sun was coming up. 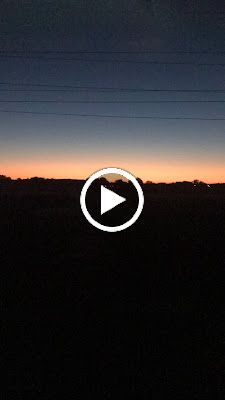 I jumped up from where I was sitting to get this pic at the Kankakee stop because it's in the song, The City of New Orleans.

All along the southbound odyssey
The train pulled out at Kankakee
And rolls along past houses, farms and fields... 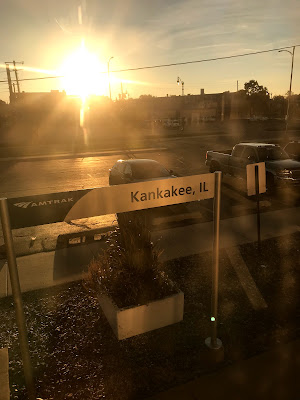 Once we arrived in Chicago we packed up our stuff we stepped off the train and into Union Station. 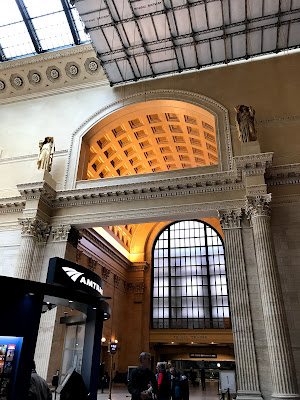 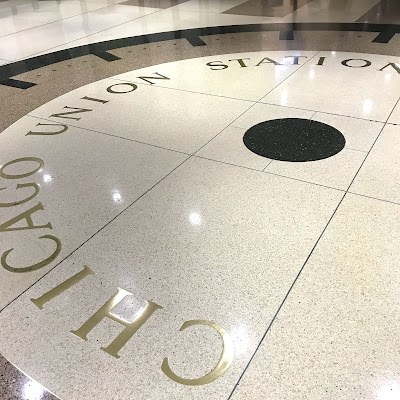 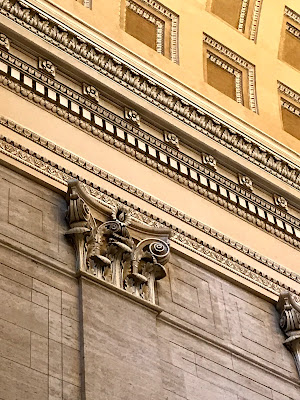 We stopped dead in our tracks. What a palatial building! Memphis tore down its own beautiful marble train station to make way for a post office during some sad mid-century city planning debacle. NOLA's station is also a pretty sad affair. But this! 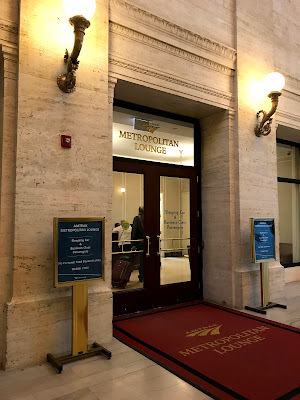 Also, being in a sleeper car affords you entrance to the Metropolitan Lounge, where you can store your bags and grab a gourmet coffee and fancy oatmeal. 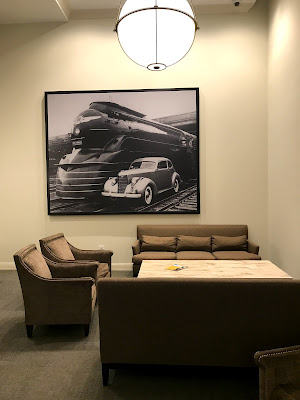 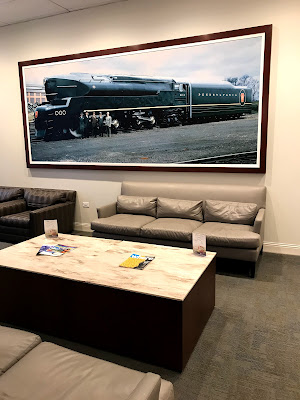 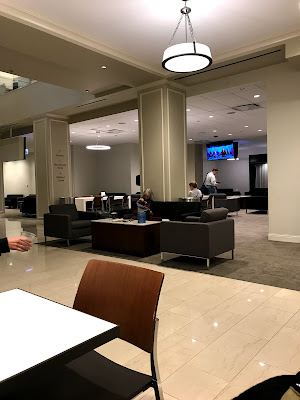 Yes. Fancy oatmeal is a thing.

Since we had about four hours between trains I thought it might be worth trying to go to the Sky Deck at the former Sears Tower, now Willis Tower. Trip Advisor didn't give me much hope warning about  2-hour lines to buy tickets, more time in line for the elevator, and 40-minute lines to get time on one of the ledges. Since it was right around the corner we decided we'd just walk over and see what it looked like. 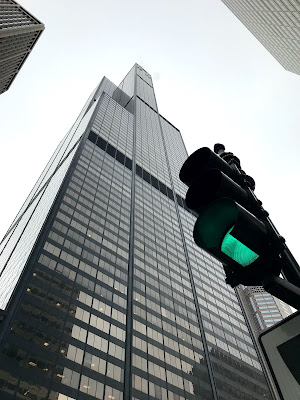 It looked like no line. FYI a cloudy Wednesday morning is a really great time to try it. The elevator ruined me for all other elevators that take so long to go up like 4 floors. You are whisked up 103 floors in 60 seconds. There's even a fun video on the ride to show you all the world landmark heights you are passing as you go along. 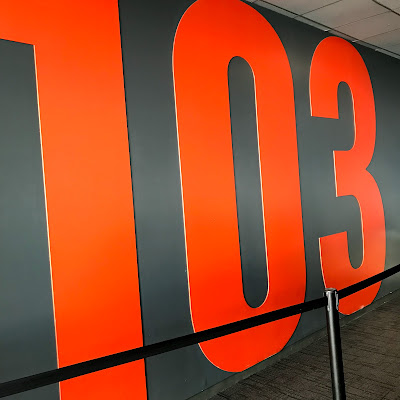 The doors open and there you are at what feels like the top of the world. 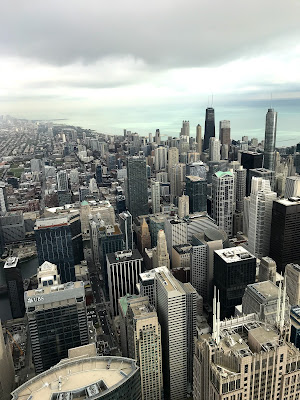 We jumped in a line for the nearest ledge where the ledge assistants tell you that you only have 60 seconds on the ledge. There were maybe 20 people in the line but as there are a few ledges it went really quickly. What can I say? I love a good photo op. 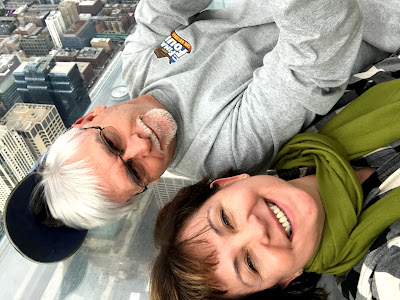 I was looking forward to doing this but when it came time to take that first step, which looks to your ancient brain like you are stepping off a building, I balked. My husband held my hand since apparently the primitive part of his brain is broken and he jumped right out there.  My modern brain quickly adjusted to this new and weird information (don't trust your eyes) and then I didn't want to leave! 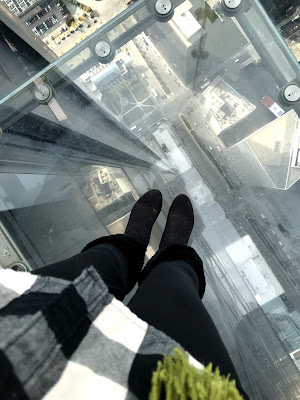 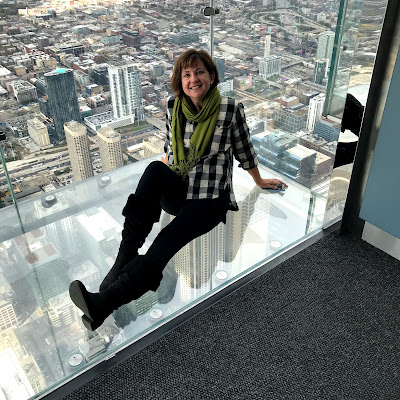 While we were on the ledge we noticed no one was behind us waiting. We got plenty of time to get all the picks we wanted. Okay, obviously that I wanted. It's like the ultimate photo booth! 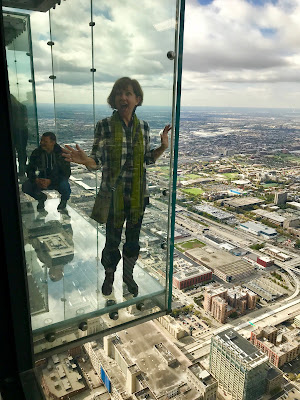 Everything about this trip just kept working out like the clouds parting for a glimpse of a beautiful blue sky over the city. 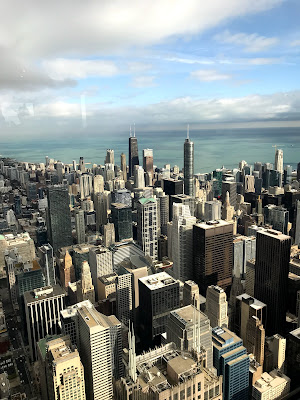 We still had time for martinis and sushi for lunch at a great place we happened upon on the way back to the station called Hot Woks Cool Sushi. Once again our timing was perfect! It was practically empty when we were seated and when we left there was a line out the door. 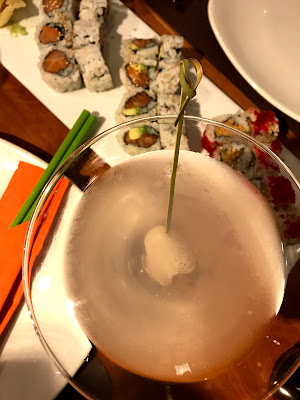 Next, we hit one of the many bars in the train station and chatted with the locals most of whom apparently were on their lunch hour. I guess the 3 martini lunch is alive and well in Chicago. I overheard my husband tell the guy next to him "Your train station is nice than our airport."

Also, everyone we met in Chicago was so nice! It felt, well... southern except things moved a little faster.

We headed back to the lounge to grab our bags and get ready for the next part of our train adventure as I marked the Sky Deck off my impromptu bucket list.

What's on your bucket list? Also, how much of a trip do you plan ahead of time?