West to Seattle Aboard The Empire Builder 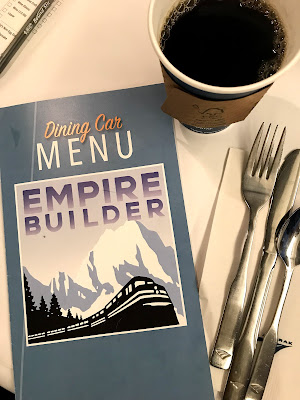 The train left Chicago on time headed north before turning west sometime during the night. Read about the ride from Memphis to Chicago here. While my husband napped I pressed my face against the window of our sleeper car to catch glimpse after glimpse of idyllic farms flashing by. Red barns with stone foundations. Windmills. Authentic farmhouses not "farmhouse style" wannabe mid-century ranch houses. The scenery was plucked from every vintage children's book about life on a farm. I was enchanted. 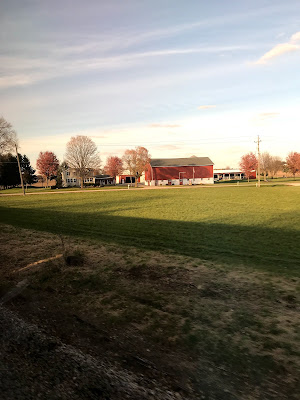 Our steward (ess?) Erika came by to introduce herself and give us all the information about meals, bed set-up, etc. She offered to bring us meals in our room if we didn't want to eat with anyone else. Just so you know table sharing is classic train procedure. I mean it's how Eva Marie Saint meets Cary Grant in North by Norwest! We did eat in our room the first night but it was a lot of trouble finding room to put all the plates and glasses on our tiny table, so after that we went to the dining car. 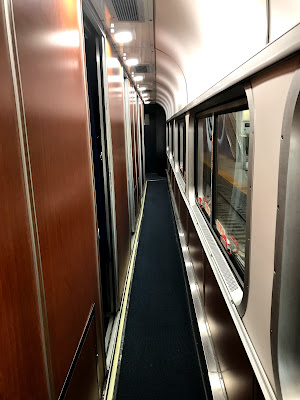 I stepped off the train in Milwaukee so I could say I'd been to Wisconsin. 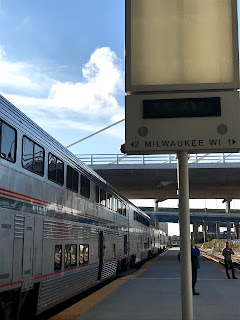 The thing about traveling by rail is that you see the backside of cities. The original and oldest parts before highways made every landscape everywhere about Walmart and Home Depot. 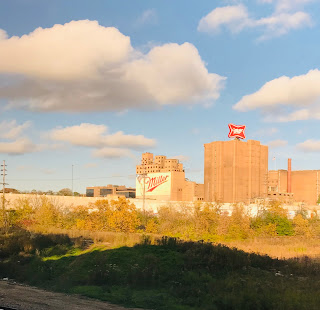 After dinner, we played cards, something we never do at home, mainly because we don't know any card games. We worked at poker which doesn't make much sense without betting, but resorted to kid games like War and Crazy Eights. It got dark early so far north so we called in a night around 9:00. It felt luxurious to have our own sink. 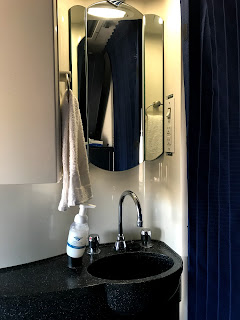 The oddest thing about the sleeper car is that the toilet and shower are a combo. When I first checked this out I thought "I won't be taking a shower in there." But I did. Four times. The first time while we were rambling through rural Wisconsin I disrobed and asked my husband if he thought we should close the curtains. "What? We're in the middle of nowhere." Just as I was stepping into the shower we passed a crossing with several pick up trucks stopped at the crossing. After dark with our room all lit up all I could do was hope the train was moving fast enough for me to be a blur. Otherwise, I can only hope no one was scarred for life. 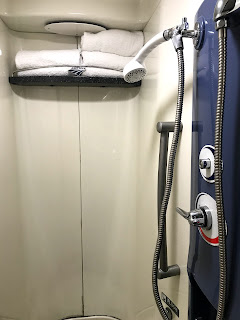 Then while I was in the shower the train lurched to one side and the door flew open while I screamed and grabbed it with my hand...the same one I was holding the shower head with spraying water everywhere. I'm sure the other travelers wondered what all the shrieking and laughing was about. I was personally rewriting The Girl on the Train as a slapstick comedy.

Guess who's in the top bunk again. But I got a ladder this time! 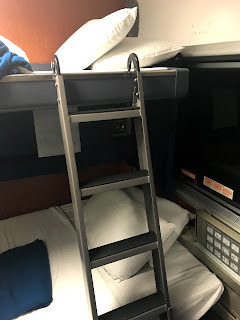 I slept surprisingly well and we had breakfast with a German man who'd been living in Wisconsin for four decades. Over our meal of pancakes and bacon, he told us about his work promoting insects as food. He'd been around the world speaking on the topic and had written a paper with a title so scholarly I still couldn't remember it after asking him to repeat it three times. Something about edible insects and industry in Tanzania. It was all fascinating but I couldn't help but notice how much he was enjoying the eggs and toast. 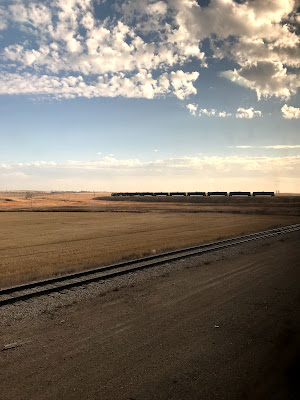 The landscape droned on through North Dakota in brown and blue. Mile after mile we looked for trees or any kind of break in the landscape. 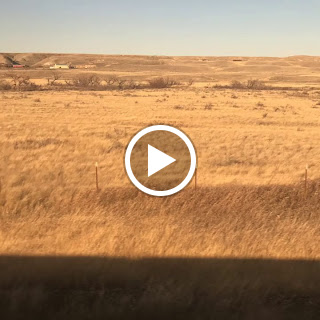 Farms were far between and the lives of the people living on them seemed isolated and depressing. I imagined that the antidepressant medications and alcohol consumption rates were high. While ND isn't in the top ten for depression it is indeed ranked as the drunkest state with the most alcohol-related driving deaths. 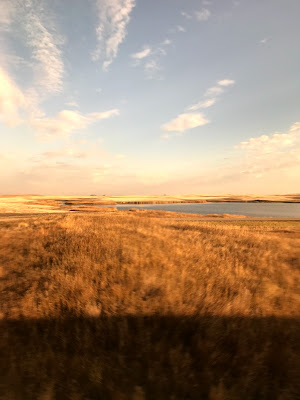 It looks pretty in these pictures and at some points, I was startled by the stark beauty. The ability to see so far and so much sky certainly had a nagging appeal. But but when we saw any sign of civilization it was so far from anything. It was all so Lonesome Dove but mostly just looked lonesome. 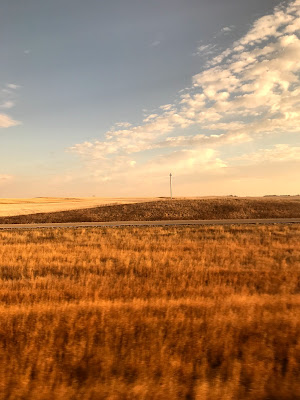 I was told later by a fellow traveler that while people from east of the Mississippi think this looks desolate that folks from here feel a bit claustrophobic in landscapes hemmed in by trees. People are fascinating, aren't they? 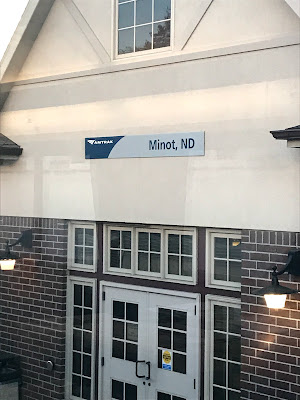 To us it was vast and bleak even on a sunny day.

As we traveled farther west we began to see not just isolated farms but abandoned ones. Collapsing barns and houses where people had plainly just packed up one day and left. I filled my time looking out the window imagining what happened to them. Check out all the pics of abandoned ND houses on Google. In one field a couple of miles from anything resembling a structure sat a Model T rusting away. It's a strange thing to see modern ruins. We passed a ghost town where there was a street of buildings without one patch of paint to be found. I thought about the wind howling through those lonely buildings in winter. Snow falling through the cracks. My imagination swirled. 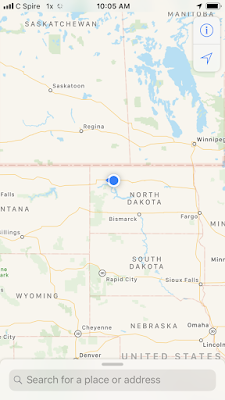 Inside the train, we struck up conversations, Train travel forces connection. We ate lunch with a quiet man and dinner with a chatty man who was a retired librarian and his wife, a doctor in Missoula. He had the answers to many of our questions. The government had given people land to get them to move here and some of them had made it for a time but it was too harsh and hard to make a go of it. That's what had happened at those abandoned houses we saw. People gave up and moved on. While this wasn't the area affected by the Dust Bowl it was obvious that the Depression was what finally drove people out. 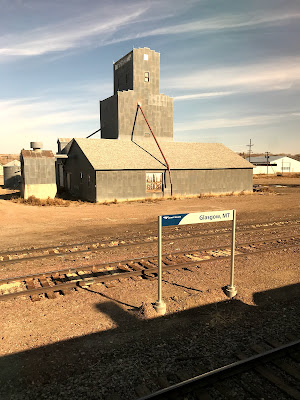 At one stop, border patrol agents strolled through the train asking people how they were enjoying their trip. Just as the sun began to set we saw the mountains in the distance. We'd be going through Glacier National Park overnight. That's the one thing I'd recommend about this trip. Fly to Seattle and do it in the opposite direction. But I have to confess I gained a more complete understanding of just how vast this country is on this journey. 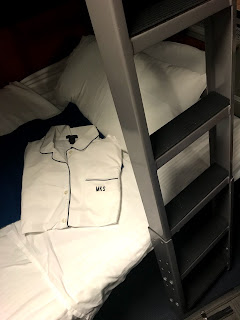 We bedded down the second night winding through the mountains and on the second floor of the sleeper car in the top bunk I felt every twist and turn. I had an apprehensive moment where I realized that if the train derailed upside down I'd be in the worst situation. I talked myself down off that fearful ledge and fell asleep dreaming of mountain streams and misty landscapes.

The next day: Seattle!