How To Recreate An Old China Cabinet With Paint and Imagination 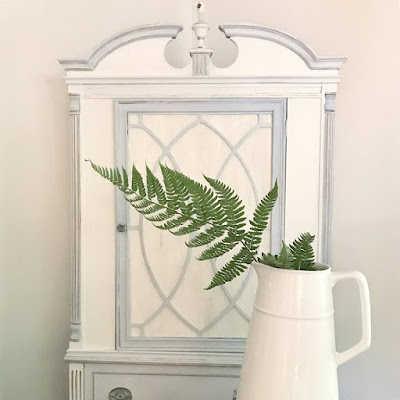 If you have a china cabinet that you want to keep but have no idea where to put it, then you might consider recreating it and using it in another room. When I originally did my Scandinavian inspired bedroom in 2013, the burlap covering the glass on the china cabinet went along nicely with the burlap curtains I hung. 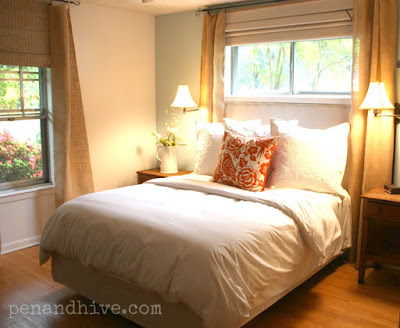 On the left you see how it looked when I inherited it. On the right after its first makeover. 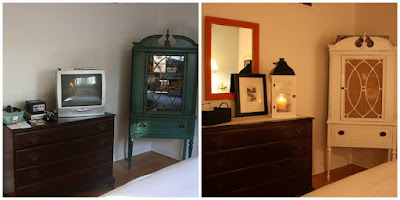 I eventually replaced those burlap panels with plain white ones from IKEA and the burlap on the cabinet now looked really farmhousy. Not the look I was going for. Plus I just really wanted an excuse to play with the look of Gustavian Furniture.

Plus I wanted to feel fancy by saying "Gustavian Style Accessory Armoire."  It's the same reason I call my herb garden and lettuce patch a "potager."

This look is named after King Gustav III of Sweden. He traveled to France and was heavily influenced by the Neoclassical and Rococco styles he saw there. He brought them back to Sweden in the 1700s where they were simplified into what we know as the Gustavian style today. That explains why as I was painting I kept asking myself "Is this too French?" I felt like I was walking a very fine line. I could just have easily asked "Is this too fancy?"

The Scandinavians shy away from anything over the top. So yeah, they're pretty much nothing like the French. Though when you see a portrait of Gustav he totally looks like a fancy pants. 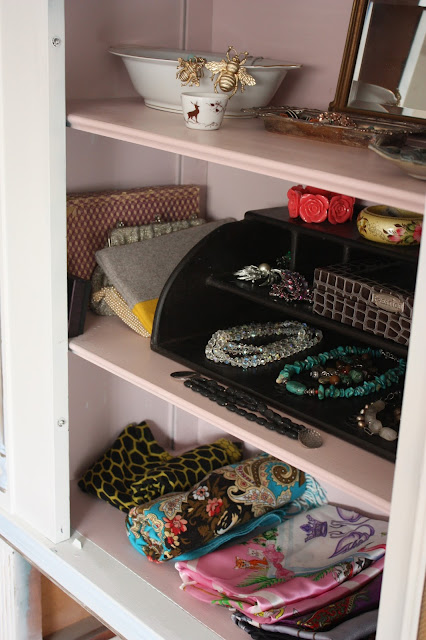 The first thing I did was to paint the inside of this piece with a pale pink paint. I keep using this sophisticated pink around the house in small doses to add an air of feminine fun. It was ideal for the little space where I keep silk scarves, vintage beaded clutches, and jewelry. I love using vintage china or silver serving pieces to hold bracelets and necklaces. 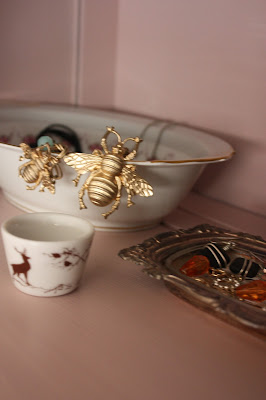 A few days later I started on the outside. Now in its first makeover, I confess to having used spray paint--GASP-- I know! Are you okay? Go get some water and come back.

I was doing a whole room at once and was in a hurry to make it all look cohesive. And it was fine for 5 years! But recently I've been looking at it and thinking it deserved better with its cute little details and vintage charm. 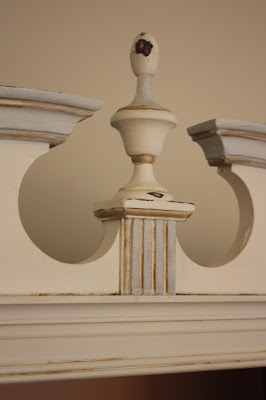 I didn't have an actual inspiration piece but knew I wanted it to be blue and white with some very subtle gold details. The word that kept coming to mind was dreamy. I wanted it to look wispy, almost like if it were in a watercolor painting of the room.

Oh, is that all? I mean how hard can that be?

For the white I used Pure White over the spray paint.

In the detials I painted Modern Masters Pale Gold with an artist's brush. 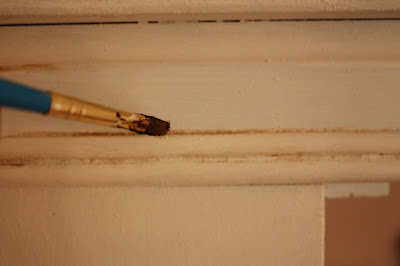 For the blue areas I mixed white and blue paint. Then I sanded back the high spots to expose more white. You know I make this up as I go along, right? 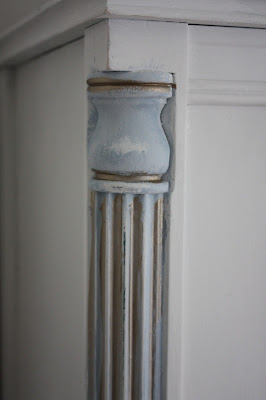 I waxed with clear wax and then added white wax to make it all look even more dreamy. The thing I noticed about trying to achieve a Gustavian style finish was that I kept feeling like I needed to tone it all down. I wanted color and detail but it all had to be subtle. The white wax went a really long way toward achieving that unique Scandinavian look.

For an aged effect I added some dark wax in the crevices here and there.


Hardware: This time instead of removing it I painted lightly over it and then wiped back the excess. 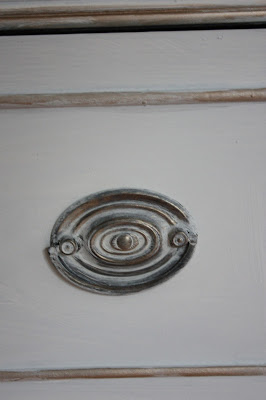 I removed the burlap from the glass and was in the process of popping the glass out so I could paint the door when the glass broke.

Now, I'll be honest I was thinking about doing a mirrored effect on the glass which I was concerned was going to push the envelope way over toward French inspired. So when it broke I was all like, meh. But then it was a hassle to drag my butt to the hardware store to have them cut a piece of wood to fit. I decided to make it a little bit less finished than the rest of the piece. For some reason I wanted the door to look like an older painted finish. It's a hair thicker than the glass so all the molding that held in the glass didn't fit over the thicker piece of wood. I ended up tacking it in and covering the ugly nails with upholstery trim. 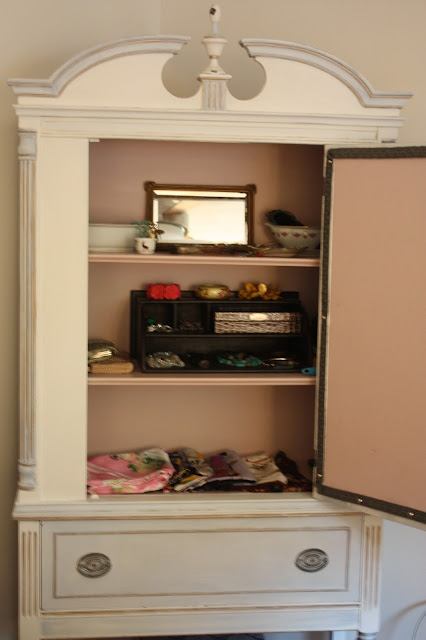 Normally for projects I give little thought to things like the inside of drawers but for this project, which I think of as a little jewel box, I went all out and even painted the inside and  outside-- who am I right now? --of the drawer. 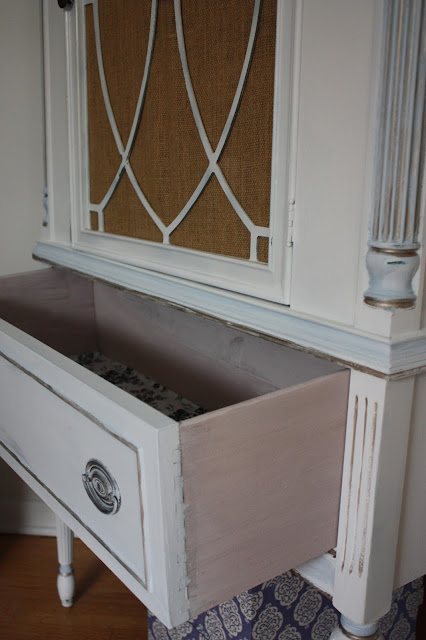 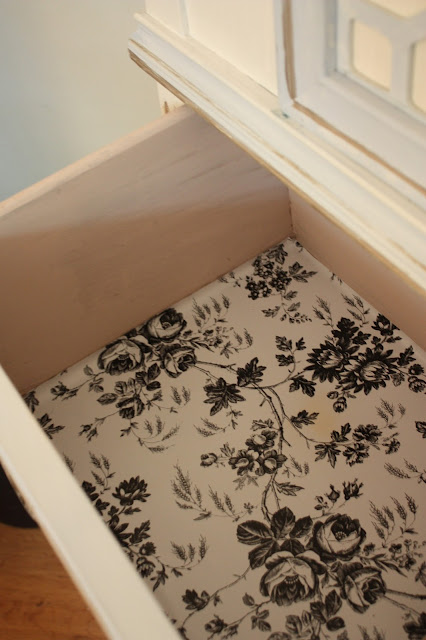 Y'all! This beautiful liner paper is from the dollar store! Again, getting really close to looking French here, but this is the liner paper in every drawer in my house except the kitchen. 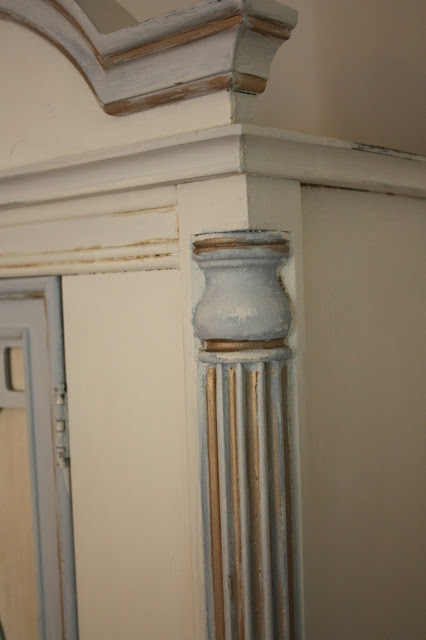 Look how how much this picture looks like a watercolor! Mission accomplished!

I am so happy with how this little cabinet turned out! It's a perfect fit for the bedroom. I still wanted it to be white but not WHITE. The color is subtle but echos the blue accent wall. I love that when I open it up to grab a piece of jewelry for the day it is secretly all girly and feminine on the inside. 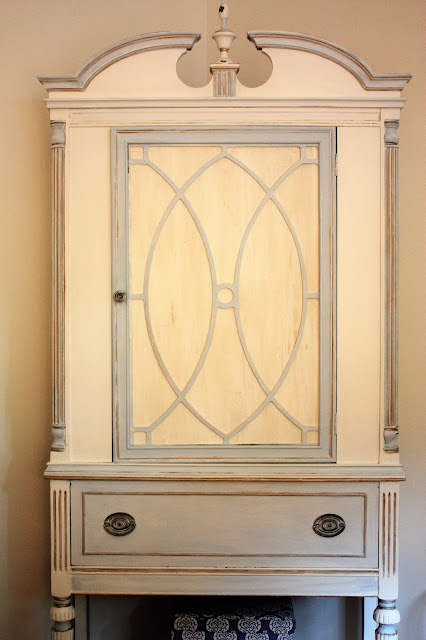 Who says a china cabinet has to be used for china? It's your house. Do what you want.