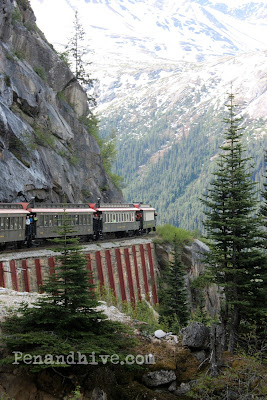 Our last excursion in Alaska was a train ride from Skagway to the White Pass Summit. That first photo up there is my favorite from this ride. It doesn't even look real, does it? Actually I was so caught up in the moment I don't think I grasp that it does actually look a little treacherous. 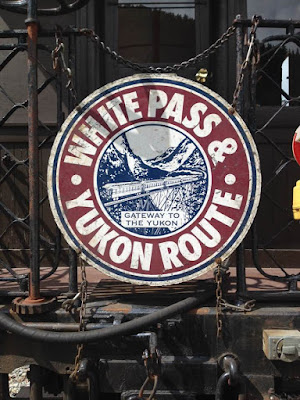 The train literally leaves right from the boat dock and and brings you back to the same spot roughly three and a half hours later. It was the most convenient thing ever and so much fun. After boarding and securing our seats the train left and just a mile or so up the tracks they announced that we could go out to the platform and stand. 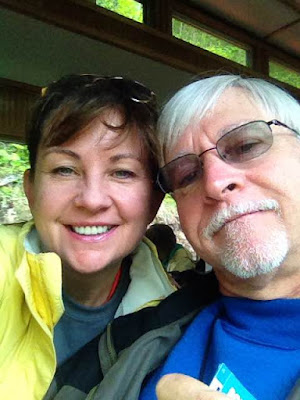 I had no idea that would even be an option! 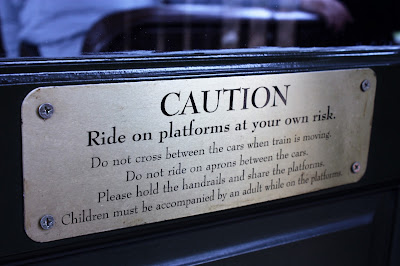 I immediately jumped up and headed for the platform at the rear of our car to secure a good spot for our little foursome. I just knew there would be a mad rush and so I wanted to stake out our territory. I'm so glad I did, otherwise I'd never have gotten this amazing video!


I waited...no one followed me. I looked inside the car and everyone was just sitting in their seats. On the platform of the adjoining car an Australian gentlemen with an enviable camera said "I thought I'd be fighting people off over here. There's people asleep in there! I mean, you paid your money didn't you? Might as well get the most out of it, I say!" 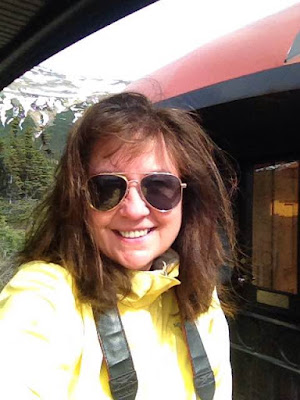 Eventually a woman and her husband joined me and while she leaned over the edge with me to look at the view he stood in the middle of the platform and said "I wish you wouldn't do that." 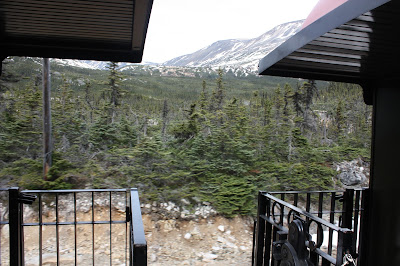 I like to call myself a cautious adventurer. I don't like danger, not really. So though a few of these pics look a little scary, I promise I was perfectly safe the whole time. Even if I was leaning over a gate, just a little, to get the video and some of the pictures. 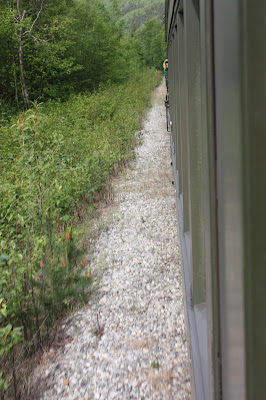 Notice how lush and green everything is at the beginning of the ride. 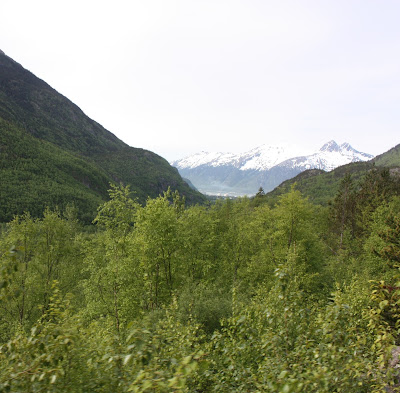 As the train began to ascend the mountain I caught this glimpse of another train coming up where we had just been. The ascent wasn't that noticeable so this sight surprised me. 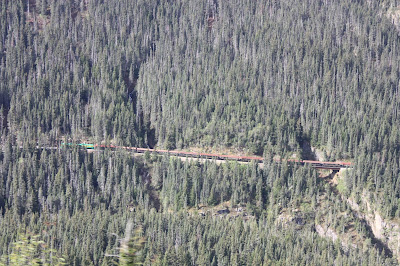 Now the trade off for being outside the car was that I completely missed all the interesting history of the railroad, gold rush, and sketchy characters who opened up this area. But, hey, that's what the internet is for. For history of this railroad as well as information about riding it, check out American-Rails.com

So many horses died on this route it was known as "Dead Horse Trail." You don't put that on a tourist brochure so it's just called White Pass. Probably best. 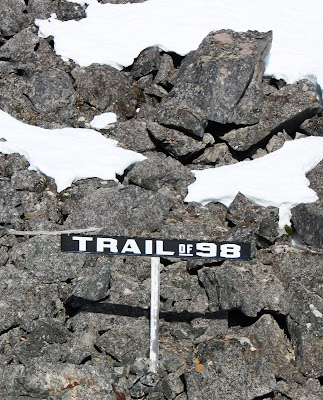 By the time we reached the area near the Canadian border it was cold and the snow was still fairly deep along the tracks. I'm pretty sure I'd have stayed home in the lower 48 and opened up a dress shop or something. Trudging around up here on the way to the Klondike to look for gold doesn't seem like a good idea to me at all. See what I mean? Cautious adventurer. Plus, I really like to be warm and oh, I don't know...alive. 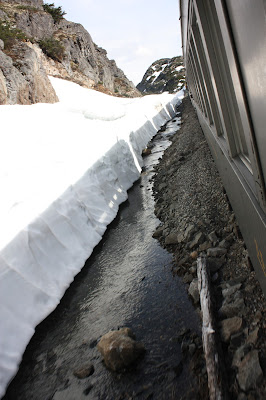 At the summit the landscape looked moonlike. 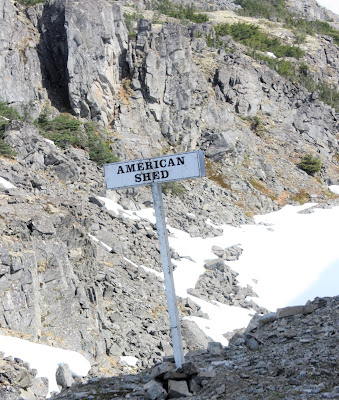 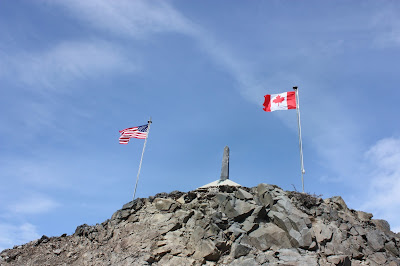 It might have been spring in Skagway but at the summit it was still winter. 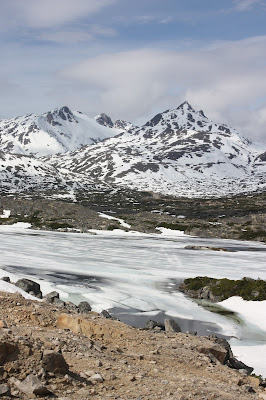 Seriously, no amount of gold. 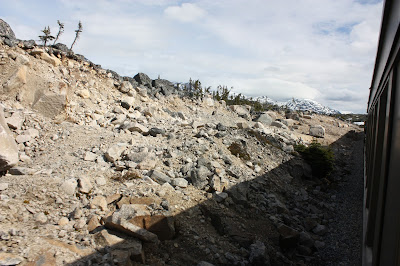 So along this part I had to be careful not to stick my neck out too far, for obvious reasons. See that rock? Building this railroad was a blast. Literally. Through 16 feet of rock in many places and that isn't even talking about tunnels through mountains. 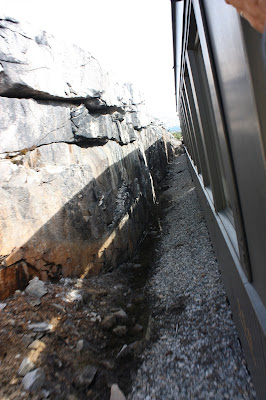 The Food Maven joined me even thought she is scared of heights, but you'd never know it! Look how relaxed she looks! 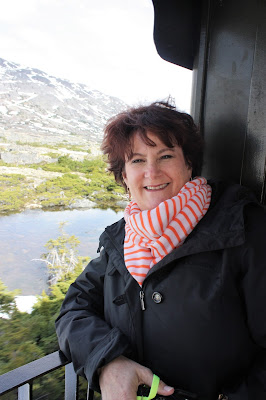 Now for my favorite photographs of the day. I saved the best for last. Of course the very best one of all is that one at the top of this post. 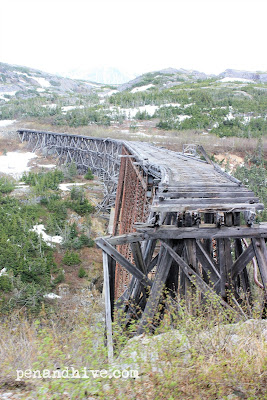 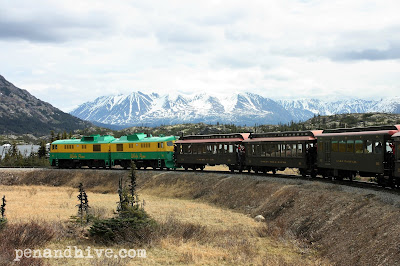 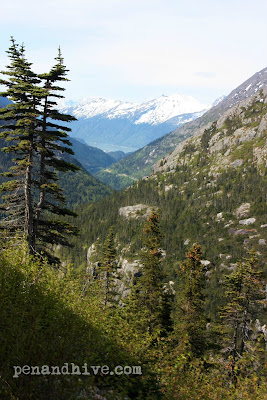