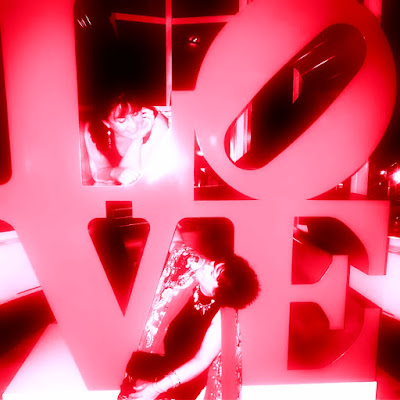 Recently I climbed up into a piece of artwork for a photo op with a friend. As a docent at a museum where I regularly chide people for just standing too close to the art, it felt as if I was committing some enormous crime. But I did it anyway. Let me explain. As we were exploring our ship we passed this sculpture, a version of the iconic Robert Indiana Love sculpture. 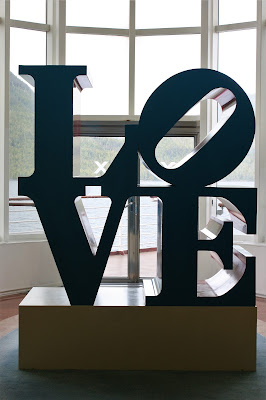 As soon as I saw it I imagined the cutest photo ever of me and my friend. I looked around for a sign that said not to touch it or, you know, climb on it.

"We should get into this and have our picture made. I'll just climb up into that L and you sit there between the V and E."

Until I tried it. This sculpture is deep. And really slick. I tried to climb up into the L but it was impossible. There was nothing to grab onto or step on and I certainly didn't have the upper body strength to pull myself up into position. Plus in the attempt my friend and I both began laughing so hard it wasn't going to happen.

A few nights later as we were leaving we told our husbands about our failed attempt at the cutest picture idea ever. My husband thought it was grand but I told him that we'd tried and failed.

So here we were 4 adults, sort of,  all dressed up (because of course we would choose to do this on dressy night) climbing, pushing, snapping, and laughing, all while desperately hoping no one would pass by. The picture was finally taken by her husband while mine stood by laughing.  I have to say it's one of my all time favorites. My idea was just us looking at the camera but when she said "Hey look down here at me!" It was a stroke of genius. 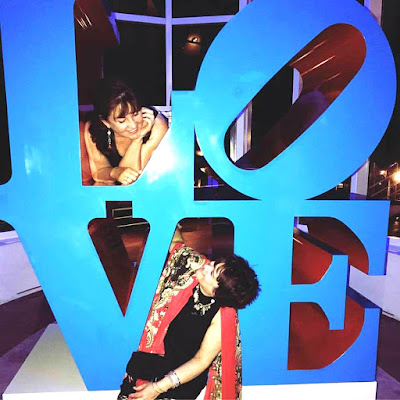 I...well, love it. I also love the idea that you never get too old to cause a little trouble with your friends.


*photo compliments of Susan Frissora
Posted by Michelle @Pen and Hive at 8:05 AM