Honey Update and The Americans 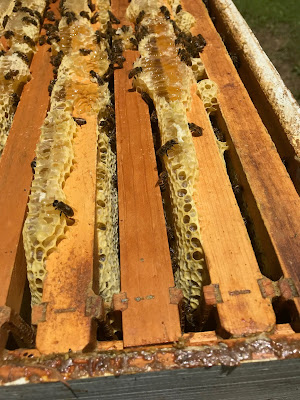 I know you think these things have nothing to do with each other but in season 5 there was a scene in which (spoiler alert) Phillip and Elizabeth are talking and on the TV in the background there was a bee documentary. #worldcolliding

I am still trying to read into that all the symbolism in that I want there to be.

I really just wanted to write about the series end of The Americans but realized that A- You won't care if you haven't seen it. B. There was literally nothing I could say that wouldn't be a spoiler in case you ever want to watch it (which you do, even if you don't know it). And C- I didn't feel like crying all over my keyboard this morning.

(My bees are Carniolans but if I ever get some Russians I'm totally going to name that queen Elizabeth Jennings).

What's the last television series you were obsessed with? Let me know in the comments! If it was this one then DM me so we can discuss!

We had a swarmy spring which can sometimes mean that your bees make more bees instead of honey. At least that's the conventional wisdom spouted at bee meetings and in books. Yeah, well my girls are bosses  and do what they want. I did some quick checks on honey supers yesterday and even had to pull 5 frames from one super because those bees were completely out of room.

I did that quick and dirty thing I sometimes do in a case like that where I take out individual frames, brush off all the bees I can and slip them in a plastic container with a lid. It's not ideal but they needed extra space immediately so I didn't want to waste a day or two on an escape board. Plus the super was so heavy I could easily have dropped it trying to hoist it alone.

My neighbor who has 6 of the 8 hives in his yard was fascinated by the process and took video where I look like I have no idea what I'm doing or this is my first time in a beehive or something.

Sometimes you gotta make it all up on the fly and it's always fun to have an audience for that.

This hive was the one that was so angry early in the spring that I couldn't work them or leave them in my own yard because the hives sit in my garden. Read all about it here.

All the angry bees seemed to have been in the swarm and now this hive is calm and it's all good in the neighborhood.

If you are a fan of The Americans then hit me up in the comments. If you have no idea what I'm talking about then...yay! Honey!

If you are waiting for honey to be ready so you can buy some, we are still quite a ways from that, but I'll keep you posted!

My IG family gets an update on the daily ! XOXO