Grace for Wherever You Are on Your Journey 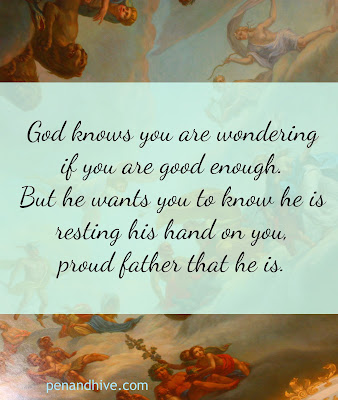 A couple of years ago I went on a silent retreat and I learned something that kind of shocked me...

After a restful night’s sleep (no television or internet will provide that, by the way) I woke up to find that the storm had passed. I opened my window to hear the bluebirds which populated the surrounding fields and meadows. The cardinal had stopped singing his rain song and moved on to merrier notes. I ate and then prepared for my meeting with the nun assigned to me.

I'm not Catholic so I wasn't sure what to expect.


I arrived for my appointment a few minutes early and found her sitting in her office waiting.  She asked me about my background and what I wanted from the weekend. I'd come to Our Lady Queen of Peace Retreat Center with no expectations. No agenda. God and I were having some issues.  I explained that in the last couple of years things had happened that had shaken my trust in some of what I’d been taught.

“I was for a long time. I’ve moved on beyond that but I can’t say I trust Him or anyone completely in the way I once did.”

I waited for her to speak but instead, she looked at me directly and said nothing (silence is a wise tactic and one I should work on).  I talked some more and wondered if I was rambling. As I shared I realized how tired I was of this story. How the story itself felt tired of being repeated.  I also noticed the story no longer was accompanied by any emotion. I told it as if I'd read it in a book. I stopped talking and we sat in an awkward silence looking at each other.

"This is the part where you are supposed to impart words of wisdom," I said.

She laughed but persisted in being unhurried in her listening and waiting. Finally, she asked if I prayed. If I used scripture when I prayed. I said I did, but inwardly thought how little real prayer I’d been doing lately. A void existed I didn’t seem able to find a way across.  She handed me a list of verses to look up along with the instructions “Rest in God’s love for you.”

The new skeptic in me bristled while something else in me breathed in that idea.  I took my Kindle out to one of the porches and sat in the sun. I opened Disappointment With God by Phillip Yancey.  I like Yancey. He doesn’t sugar coat things. He attempts to confront legitimate questions about faith head on.  I’d started this book in January relating with the skeptic he encounters that lead to the book. But when the book took a turn toward faith I put it away.  This weekend seemed like a good time to try again. I finished it before lunch. A passage stood out:

"By focusing myopically on what we want God to do on our behalf, we may miss the significance of what he has already done."

Let that sink in.

After lunch I returned to my room. I got out the list of verses the sister had given me. I was familiar with them. "Nothing new here." I thought to myself. Wanting to get the most out of the experience however, I opened the Bible in my room and diligently looked up each one. Nothing much jumped out except that part in Psalm 139 about God marking my travels. Was he marking a map with pins? I have some great travel pics pinned on Pinterest. I haven't been on Pinterest this week. I shuffled my papers to look for "How to Deal with Distractions in Prayer."

I went on to the next verse. Psalm 139:5, "You rest your hand upon me."
An image of me standing next to my father on a gravel driveway under a hot summer sun, flooded my mind. He rested his hand on top of my head, then on my shoulder. I thought of the thousands of times I had done that to my own children. I began to think about the meaning of that.

Think about it for a moment. You are standing with your child having a conversation with another adult and you rest your hand on the shoulder of your son, or the head of your daughter. What does that mean? Why do parents do that?

Because you are proud of them.

Could God be proud of me? Somehow that seemed a foreign concept. Perhaps a result of one too many verses of some hymn relating me to a worm when I was a child. I let that thought come around again. Is God proud of me? If he is it certainly cannot be because of anything I've achieved, or for some glowing example, I've been. Maybe he was saying he was proud of me because I try so hard. Where would the grace be in that? But as I thought about that in relation to my own children, I realized that I didn't love them more when they tried really hard. I kept thinking along that line. Why are parents proud of their children when they are so small they haven't accomplished anything yet? We are incredibly proud of babies! Why?

This is where the tears began to flow.

I could understand that. I could rest in that. So can you. That is sustainable. That God is proud of you just because you belong to him. He sees how hard you are struggling. He knows you are hurt and disappointed. He knows you are tired. He knows you are wondering if you are good enough. But he wants you to know he is resting his hand on you, proud father that he is.

Rest in that for a while and feel loved because that, my friends, is grace.

XOXO
Posted by Michelle @Pen and Hive at 9:48 AM