How I Failed at Minimalism 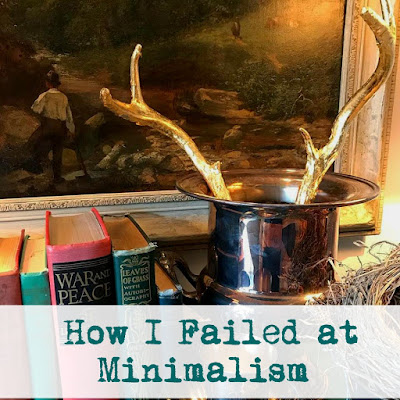 I tried. I really did.

I have spent the last 35 years clearing out. I thought I was chasing Minimalism but in hindsight was trying to keep my head above the clutter watermark. I had a yard sale every year for 20 years. Let that one sink in.

The stuff that got sold, tossed, or donated fell into four categories.

First: The things my husband owned when we married. Has any new wife ever been excited by her husband's bachelor decor? Brown velour sofas and Fight Club posters. Um...no.

Second: Detritus from every stage of my kids' childhoods. Pacifiers to prom dresses, kids come with a never-ending phase by phase tsunami of clutter and much of it has emotional tentacles that grab and make it hard to let go. On top of plastic junk made in China and toys they outgrew, some idiot invented something called a participation trophy. They better hope I never find them.

Third: Relics of a life lived. Not my life.  Empty peanut butter jars, broken jewelry, and treasures of one kind and another. Estate sales and thrift store drop-offs for the life accumulations of 3 relatives. Stuff is so much easier to discard when it's not yours.

Read about coping with other people's things here.

Fourth: My own possessions. Things I had needed or loved at one time that had ceased to be important or useful. But I also battled hard against my own things often to make room for all the things that were important to the rest of my family. I was as hard on myself as anyone when it came to painful choices about what to part with and what to keep. This was especially true when the kids were at home and the house felt it would burst with one more thing. Have I ever gotten credit from my family for this? Nope. I'll be they don't even remember the book stand I let go of.

If you've been around a while you might remember my brush with Minimalism. But once I was rid of other people's stuff I realized that I enjoy a certain amount of abundance of the things I love. I mean, my stuff is fantastic!

Remember this if you see me on Hoarders.

As I looked around after I'd cleared the obvious clutter, I realized that I like groups of things. I like home to be cozy and just the right amount of full. When there is too much I get antsy, but the same thing happens in reverse when the decor is too spare.

I also realized I tolerate more things in some rooms than others. I don't want a clutter free studio. I want an abundance of materials as well as inspiration. The bedroom, on the other hand, is calmingly free of extras. I hate things sitting out in the bathroom, but love a living room filled with pictures and treasures from travels. Rocks and bird's nests mixed with silver cups and champagne buckets.

It looks like a kindergartener and Holly Golightly decorated my dining room.

Remember when I was purging hard and looking at everything wondering if my kids would say "Why did she keep this?" Read My Morbid Exercise For Purging Clutter. I still do that sometimes but just as often think "Eight silver mint julep cups will look great at the estate sale."

I know. It's still morbid.