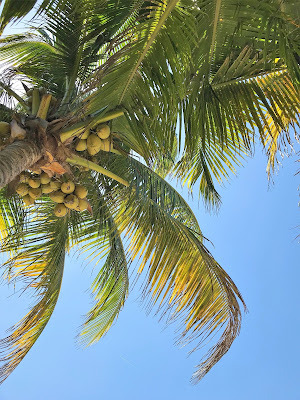 What are we doing? WHATEVER WE WANT!

My friend Debi and I sang this over and over while jumping up and down in the water and throwing our hands up in the air. If you've been reading along you know we were on this trip with her daughter, Casey, and her niece, Maggie who was turning 21. Sometimes you just need to act like you are six years old and it's usually best to do that when you can say "We're never going to see these people again." 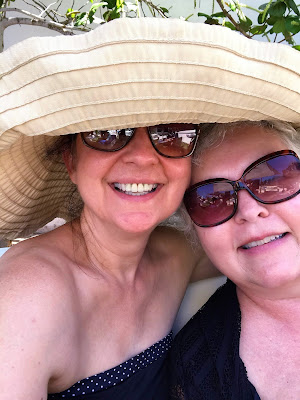 You know you are living your best life when you are wearing a sun hat big enough for you and your bestie to get under.

No one was interested in going to Chichen Itza (Read about my two previous trips to the ruins here and here.) so the four of us opted for a private beach excursion complete with an authentic Mexican buffet and unlimited drinks. Unlike Cozumel, Progresso is a place I don't feel comfortable just strolling around. There's a beach just at the end of the pier where the ships dock with great food and drinks and where you can get a massage on the beach. A couple of years ago my husband and I did that and it was fun but there were people coming by constantly to sell things and I knew our girls' group wouldn't want to deal with that. 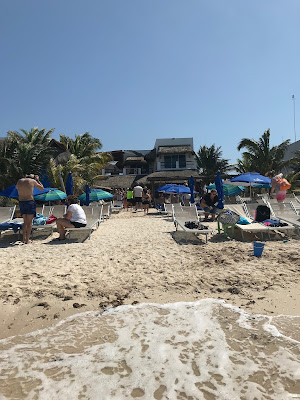 After a 20-minute bus ride from the pier we arrived, changed and grabbed some lounge chairs. I now realize I never sat down in mine. When it was billed as a "beach house" I thought they were kidding but it really was a house with a private beach. 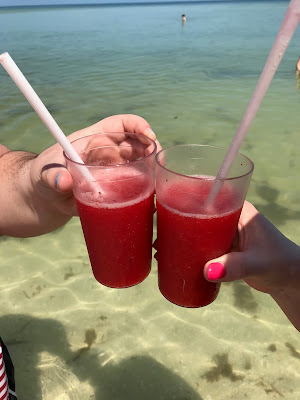 We started with drinks and food, then headed for the water. It was one of those beaches where you can wade out a really long way without it ever getting over your head and the tour guide had promised us no sharks. I still can't help but keep an eye out though. Thanks a lot, Jaws and Shark Week.  It was glassy smooth at first but later the waves picked up and one particularly roguish wave pulled down Casey's bathing suit rendering her topless while facing the beach.

Apparently, in Mexico, this doesn't even earn you any cheap plastic beads.

I was so helpful with my laughing hysterically and jumping up and down. Why is every little thing exactly one million times funnier on vacation? Thank goodness we are never going to see these people again! 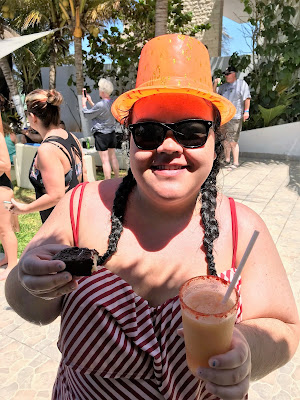 Over the loudspeaker we  occasionally heard them announce different activities you could join in between the music. We couldn't be bothered to get out of the water and so I have the most wonderful memory of us all doing the Cuban Shuffle in the gulf. They did call Maggie's name and request her presence for a birthday celebration. They put a funny hat on her and gave her a free drink and a miniature cake. It was all super cute. 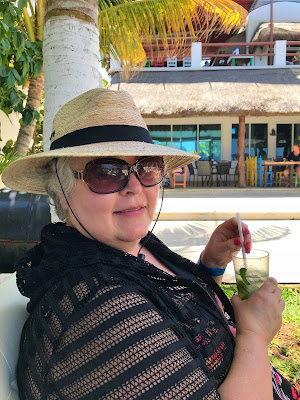 Casey and I took part in the salsa lesson and Debi found an 86 year old man who was a hit among the spring breakers in the club every night and danced with him on the beach. She'd bought a hat in Cozumel and looked like a Cuban cigar heiress. Now that's a style goal! 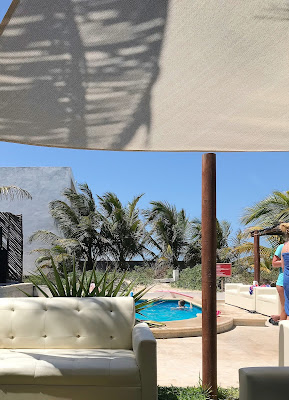 While Debi and I were jumping up and down and singing "What are we doing? Whatever we want!" a man and his wife waded out to us to tell us that they'd seen us around the ship and thought we looked like we were having more fun than anyone.  We'd already had this discussion among the four of us and were pretty sure it was true. Debi and I recalled trips to Italy and New York where we also had reputations as the people having the best time. It's a travel goal!

Eventually, Casey and Maggie made us get out and helped us get our stuff together, while Casey was helping me on with my caftan which was tangled up over my head I heard her say "I told you we should have made them get out sooner."

I guess we also looked a bit like six-year-olds. I'd lost count of my rum runners but it suddenly seemed really hard to figure out complicated things like two arm holes and a neck hole.

There was a bit of a rush to collect ourselves and get back on the bus for the ship. After all, we had to get ready for a lovely dinner, karaoke, the comedy show, and hitting the club.  Our evening goals. So very different from the ones I have at home.

You know it was a good day when you have had salsa AND a salsa lesson.