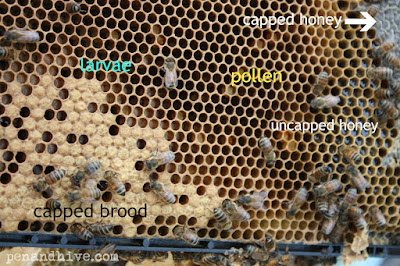 Did you know that honey bees are not native to the western hemisphere? That's right! All the honey bees (and there are seven distinct species) in North and South America were brought here from from Europe.

Honeybees live in colonies of tens of thousands. The colony is considered a super organism. Bees cannot survive as individuals but depend on each other for survival.

The queen bee, though she gets a lot of attention and praise doesn't actually run the hive and tell all the other bees what to do. She flies out of the hive once, to mate, and then spends the rest of her life laying eggs. Technically she is the mother of the hive. She may lay up to 2,000 eggs a day. Doesn't sound as glamorous now, does it?

Honeycomb is made up of wax that the bees secrete and it is made up of hexagon shaped cells that are filled with honey, brood, or pollen.

Bees in the colony have different jobs depending on their age. They will perform all the jobs during their lives: Clean up crew, nurse bee, builder, transferring pollen and nectar from foragers to cells, honey maker, guard, and lastly, forager. As foragers they literally work themselves to death. 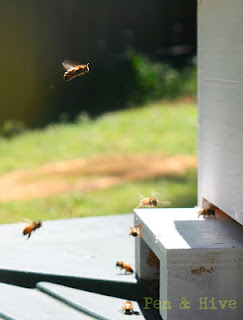 Bees communicate by dancing. It's known as the waggle dance. The colony is almost all female so...of course there's dancing!

Swarming is the result of a crowded hive. A new queen is raised and half the bees leave the hive with the old queen to look for a new home. This generally happens in the spring and they may be seen swarming in unusual places for two or three days while the scout bees look for a permanent home. 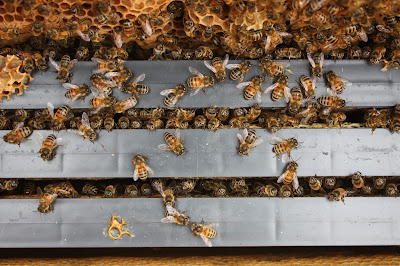 When a bee stings it's insides are ripped out and it dies. The same goes for a male who mates successfully with a queen.

Since 2006 a strange phenomenon that scientists named Colony Collapse Disorder has been mysteriously killing entire colonies of bees. While an exact cause is still up for debate, there are quite a few things at work: pesticides/fungicides, commercial farming techniques, new pests, and new diseases. 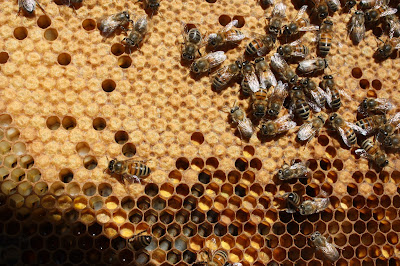 These are some simple things that are good to know but I have found that bees are endlessly fascinating. There is always something new to learn, new research being done, and stories from fellow beekeepers I haven't heard before. Sometimes the bees completely surprise me. They haven't read all the books written about them and don't always behave accordingly. But the basic things listed here for your information are actual facts that don't change.

Email ThisBlogThis!Share to TwitterShare to FacebookShare to Pinterest
Labels: beekeeping 101