Spring Report From the Bee Yard 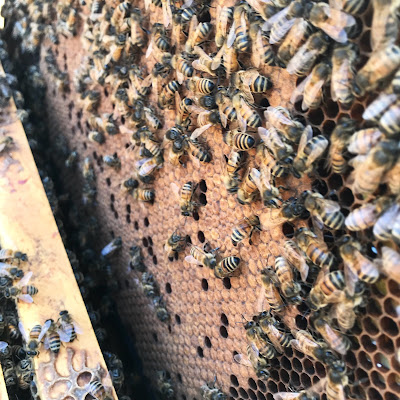 It's the busiest time of year for bees and beekeepers. The queens started gearing up the egg production in late winter and on any warm day in March I could see bees orienting in front of the hives. Orienting is when the bees leave the hive for the very first time and they spend a few minutes flying in ever-widening figure eights in front of the hive to mark its location in relation to landmarks.

It means you know there's been a laying queen in there recently without even opening the hive.

Due to weather and scheduling issues, I was much delayed in getting in the hives. There was a full month between my first and second inspections which is far too long this time of year. 7-9 days during spring is what I normally aim for.

On my March 3rd inspection I'd had one dead hive which I had cleaned up and was sure I'd be able to replace either by catching a swarm or making a split from a hive with queen cells. Last Saturday I had no idea what I might find except that from the outside of the hives all was well. I started with hive #5 because it contains the queen I purchased last year so I'm keen to prevent her swarming because she should have the best genetics. The genetics I paid for anyway. She was laying away and I gave them another box so they could spread out. No queen cells.

The next hive #3 (4 had been the dead out) was full of cheerful bees, brood, and a few queen cells. I took some frames of queen cells, brood, honey and pollen out and moved them to a nucleus. Beekeepers call this a nuc for short and it contains 5 frames of bees and everything they need to get started. This is an easy way for new beekeepers to get started or for a beekeeper to start a new hive of bees. It's temporary. I placed it in spot #1. I had combined that hive with 3 going into fall because it looked a little weak.

Hive #2  looked good so I just reversed the hive body boxes. Lots of beekeepers think this helps prevent swarming but I do it sometimes and not others. Like most other things there's some discussion among beekeepers as to whether or not it helps. Some find it unnecessary. Others swear by it. 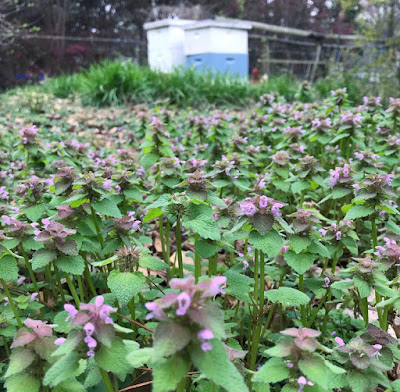 Hive A was bursting with bees but too hot to handle. (I'll explain in the next post)

Hive B was also bursting but I couldn't do a split because I'd already riled up A and it was a Saturday when my neighbors were home.

After this things got interesting...