It's swarm season. Basically, this means that the house is a mess and all creative projects are on hold while I run around playing with tens of thousands of my closest friends. Swarming is a mystery to most people, sometimes even the beekeeper, so I always get lots of questions about it this time of year. 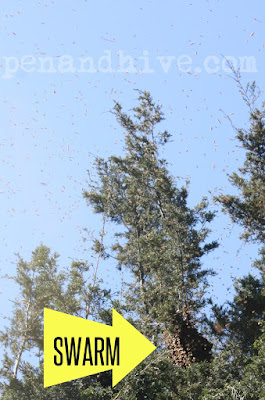 What is is: Swarming is how a colony of bees reproduces. About half the bees in the hive leave, taking the old queen with them. They often settle on a nearby branch or fencepost for a few hours or days until the scout bees find a suitable location for a permanent home. The bees remaining in the hive then wait for a new queen to hatch out. One colony has now become two. It's a sign of healthy bees and a productive queen.

What it looks like: It may look like a dark noisy cloud in the sky if you are lucky enough to see them traveling. Generally, though people notice swarms when they are collected on a temporary spot. You have probably seen this on the news in the spring. If it's on your car you can call a beekeeper to remove them. If it's on a shrub or tree in your yard, leave them. They'll usually leave within 3 days. 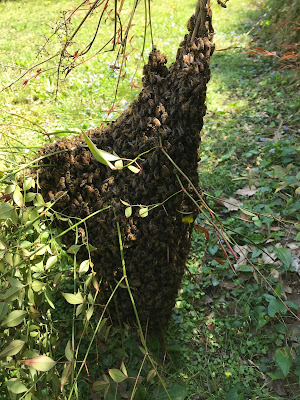 Why it's good: It means that the hive is populated enough for the bees to feel crowded. It means there are now enough bees to split into two complete colonies. Plus more bees! Always good! And it's just a really cool and exciting thing. But really...more bees! 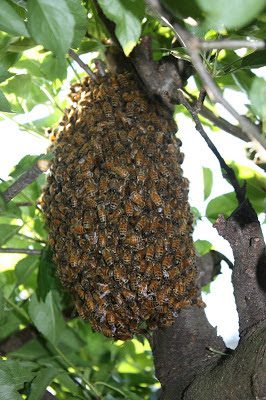 Why it's bad: The only reason it's bad is for a beekeeper. Unless you find and catch the swarm you will have lost those bees. There's also a saying that you can either have more honey or more bees so swarms can mean a decrease in honey production for that hive. Also since they take the old queen the beekeeper loses a queen whose genetics she's paid for. 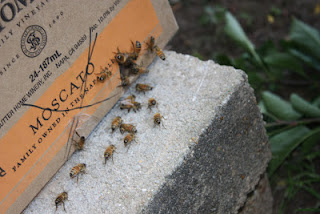 What the beekeeper does about it: Swarm catching is the thing that makes all beekeepers look insane. We will climb trees. We will climb ladders. We will put ladders in the backs of pickup trucks. We want that swarm! The beekeeper will capture the swarm in a box, bucket, or hive that has one small hole. As long as the queen is captured all the other bees will go willingly into the container. After dark, the container is sealed up and the bees can be moved to a new location. 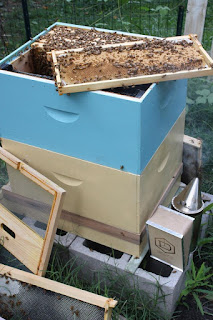 What happens to the new colony: After a few days the queen and her offspring set up housekeeping and get back to work. Then the process starts all over again.

Have you ever seen a swarm?