She Was a Good Queen in a Bad Location 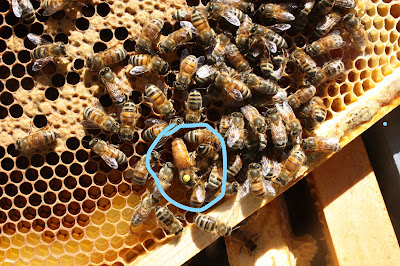 This picture is of a purchased and marked queen, not the tyrant that is the subject of this post.

There's always that one...family member, coworker, neighbor. You know, the one that can't get along with anyone and keeps everyone else on edge. Last week when I finally got around to doing thorough inspections I had that one...hive. Every other hive had been such a joy to work. No aggressiveness. Everyone was in a great mood and the weather was perfect. I used very little smoke on the bees and at one point I thought I could be doing the inspections without my suit.

When I got to the last hive it was a different story. They were quite unhappy to see me. Many more bees than normal came out to fly at me, bouncing off my veil and I could feel them hitting my suit. I only pulled out a frame or two for a quick check before I closed it back up. I couldn't risk a thorough inspection on a Saturday when the neighbors are home.

Above everything else, I'm trying to be a responsible beekeeper. Especially since I'm keeping these bees in a neighborhood. The only reason I was even doing checks on a Saturday was that the weather has been so uncooperative that it was literally the only day I had to get it done and I needed to check for laying queens and swarm cells. Generally, I make every effort to open the hives on workdays when most of the neighbors are at work. It's also helpful in case something goes wrong like I realize there's a bee in my suit and I start stripping in the backyard.

I knew immediately that I would be moving this hive. This aggressive queen and her testy progeny cannot coexist peacefully with me in the garden.  After closing up the hive and stepping away a few yards there were still bees buzzing around me. Again, not normal behavior. Into the potting shed. Still bees. Around the corner and onto the patio. Still, bees harassing me. Then the dog went tearing through the back porch to the back door and I realized she'd been stung. I opened the door and slipped her inside.

I went inside the cottage taking a few bees with me. I checked my self in the mirror before removing my suit. I went around the front way to avoid any angry bees to find that my husband had already caught and thrown out 8 bees and that the cat had now been stung and was running all over the house at breakneck speed appearing as a black and white flash as he flew from one room to another.

I know you think this sounds so fun you are already wondering where you can get some bees for your own yard.

In 6 years of beekeeping, I've never had anything like this. Even last year when I had my first hot hive. Plus there were a few bees at my kitchen window. Later when I sat on the screened porch they showed up and hit the screen from time to time. Then I heard a closer buzzing and realized there was one caught in my hair. Had she been there for an hour or did she just find me?

No matter who you are, a buzzing bee caught in your hair is extremely disconcerting. I ran into the cottage and brushed her out without being stung. Later my husband had one caught in his hair as well when trying to sit on the patio. During this entire scenario, no people were ever stung.

But still, you know what I started thinking...

And after such a cold winter?

No. They couldn't be Africanized...still...

Have you ever noticed that in the midst of some minor drama your worst fears pop up?

I made the decision to call, David Glover AKA The Bee Whisperer who lives nearby. He agreed to come and have a look. As it turns out they were not dangerous, just too defensive for this location. We inspected the hive together and found a few queen cells.

I'd had that happen with a hive last year that I had to move. They were testy and I did move them but then the bees requeened themselves anyway.

He spotted the queen and took her with him to find a new home where she and her offspring will have plenty of space to make honey without bothering anyone.

I breathed a huge sigh of relief. No, Y'all, I mean I was so relieved.

I still had to move the hive and since my husband injured his leg a couple of weeks ago my neighbor agreed to help me do the heavy lifting. After dark, I carefully taped up the hives paying special attention to any holes or gaps. It was a cold night and the perfect time to move a hive. Due to the chill, the bees all went in early making my job easier. Around 10:00 we relocated them and I brought the nuc back to the garden to take their place.

Do you have amazing neighbors? I hope so.

The next afternoon, when I went out to the garden, peace and order had been restored (Just like the end of Mean Girls only no one got hit by a bus) with only happy bees buzzing around paying me no attention at all.

In 5 or 6 weeks when all the old mean bees die out the defensive hive should calm down. Hopefully, those queens they are raising are of the gentle variety. I won't' be able to tell for a few weeks.

So what was going on with the unruly bees? I'll explain in the next post.