Rapping Up Our Trip With a Little Gephyrophobia 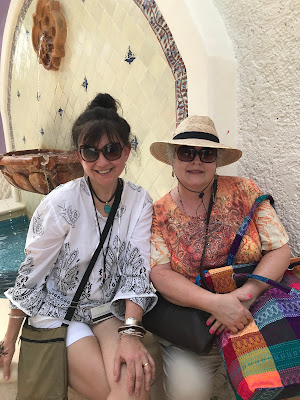 Three things here: 1. Yes, I know that I mean wrapping, but I'm trying to be clever. 2. This photo has nothing to do with today's post but Casey took it and I think it's adorable. 3. Gephyrophobia is the fear of bridges.

I guess I could have chosen a simpler title.

On the morning we returned home we had one last breakfast in the dining room before walking off the ship with our bags. If you are a light packer it's less trouble to just take your own bags off the ship. As we drove out of NOLA we had to cross the Lake Pontchartrain Bridge. Debi is afraid of bridges, something I wasn't aware of until this trip. She tried to convince Maggie to find a different route but the causeway saves a lot of time. Casey suggested music might make a good distraction. Debi chose Nelly because It's Gettin Hot in Here is the solution to so many problems.

Taking off all your clothes might not help with anxiety but singing about it at the top of your lungs actually seems to help.

While we were dancing and singing some guys in a white van next to us at the last red light before the bridge started waving at us out the window and dancing too. As we pulled away I could see the side of the van and it belonged to the local sheriff's department. We thought that was so hilarious until I got home and my detective son-in-law informed me that the van was a prisoner transport.

My friend survived the bridge while we all reassured her that it was perfectly safe. It is considered one of the world's scariest bridges, however. It's the longest continuous bridge and you can't see land at all from the middle 8 miles. While it's on several lists of fear-inducing bridges when you see the others listed in Travel and Leisure's list, it seems like nothing at all.

Researching the scariest bridges made me want to cross all of them. Check out this list from Conde' Nast Traveler: The World's Scariest Bridges.

All this talk about being afraid of crossing spans made me remember a little video I shot last year in Alaska from the platform of the White Pass Yukon train.


Are you afraid of anything? Bridges don't bother me but I'm afraid of getting stung by bees (true story), being surprised by any creepy or slithery thing, getting old, and running out of tequila. Not necessarily in that order.