Here's Why God is Proud of You 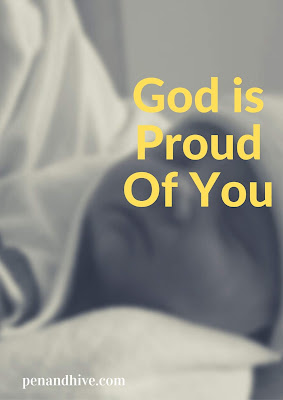 Several years ago I was going through a very hard time. Maybe you've been there too. When you wonder what the point is of trying so hard. Sitting in a place of darkness wondering if God has forgotten you, or worse abandoned you. I was at a silent Catholic retreat for a weekend because a friend had invited me, and one of the books I'd taken to read was Phillip Yancey's Disappointment With God. I was reading it halfheartedly practically daring God to show me that I wasn't wrong about Him when I read this passage.

"By focusing myopically on what we want God to do on our behalf, we may miss the significance of what he has already done."

Let that sink in.

On the second day after lunch, I returned to my room. I got out the list of verses the nun leading the retreat had given us. I was familiar with them. "Nothing new here." I thought to myself. Wanting to get the most out of the experience however, I opened the Bible in my room and diligently looked up each one. Nothing much jumped out except that part in Psalm 139 about God marking my travels. Was he marking a map with pins? I have some great travel pics pinned on Pinterest. I haven't been on Pinterest this week. I shuffled my papers to look for "How to Deal with Distractions in Prayer."

An image of me standing next to my father on a gravel driveway under a hot summer sun, flooded my mind. He rested his hand on top of my head, then on my shoulder. I thought of the thousands of times I had done that to my own children. I began to think about the meaning of that.

Focus on that for a moment. You are standing with your child having a conversation with another adult and you rest your hand on the shoulder of your son, or the head of your daughter. What does that mean? Why do parents do that?

Because you are proud of them.

Could God be proud of me? Somehow that seemed a foreign concept. Perhaps a result of one too many verses of some hymn relating me to a worm when I was a child. I let that thought come around again. Is God proud of me? If he is it certainly cannot be because of anything I've achieved, or for some glowing example, I've been. Maybe he was saying he was proud of me because I try so hard. Where would the grace be in that? But as I thought about that in relation to my own children, I realized that I didn't love them more when they tried really hard. I kept following that line of thought. Why are parents proud of their children when they are so small they haven't accomplished anything yet? We are incredibly proud of babies! Why?

This is where the tears began to flow.

I could understand that. I could rest in that. So can you. That God is proud of me just because I belong to him. Proud of you because you do. He sees how hard you are struggling. He knows you are hurt and disappointed. He knows you are tired. He knows you are wondering if you are good enough. But he wants you to know he is resting his hand on you, proud father that he is.

See what kind of love the Father has given us that we should be called the children of God, and so we are... 1 John 3:1

And I shall be a father to you and you will be my sons and daughters says the Lord Almighty.  2 Corinthians 6:18

So at the end of January when most people are already disappointed in themselves for not keep ing all the resolutions they made and for breaking more promises to themselves yet again, I say, take heart. If you followed along with this little challenge you have some small wins and easy victories for building on. And if you didn't do anything you're proud of, remember that you don't have to accomplish anything for God to think you are pretty awesome.

Take that with you into the rest of your year.

Email ThisBlogThis!Share to TwitterShare to FacebookShare to Pinterest
Labels: fresh start field guide, Getting it together, goals, motivation