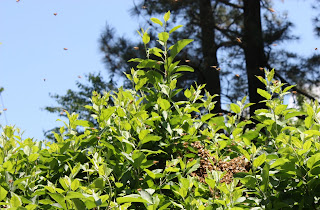 One of the benefits of having your beehive in your backyard is that you can keep a close eye on them. One of the hazards is having to explain to the new neighbors that you need a box (you know they have lots of them since they just moved in) to put your thousands of swarming bees in.

Welcome to the neighborhood. 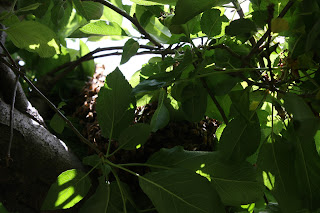 On a warm afternoon a couple of years ago between my hive and a row of trees beyond the neighbor's house the air was thick with bees. I wondered if my bees might be swarming but the amount of bees I saw seemed to be far more than I think are in my hive. My bees flew back and forth between the hive and the swarm, but the swarm seemed to move on in 20 minutes or so. Next we had several days of rain and record breaking cold temps for May. But finally, the sun came out for about half an hour and my bees decided swarming seemed like a fine idea. I thought they might be doing what is called orienting--what new bees do when they exit the hive for the first time and get their bearings--but this was different. These bees were LOUD. The air was humming. As I watched, more and more of them began to congregate in an apple tree about 10 feet from the hive. Eventually, the air calmed and I went out side to see what was going on. I looked up and about 12 feet off the ground was a cluster of bees on a limb.

I'd been dreading this. They'd swarmed.

The good news was that they were close by, on my own property, and that swarming is a natural part of colony reproduction and generally means I have a strong group of bees..

The bad news was it's the weekend and my neighbors were all outside, I didn't have any extra equipment. And, I'll be honest, I have no idea what to do. 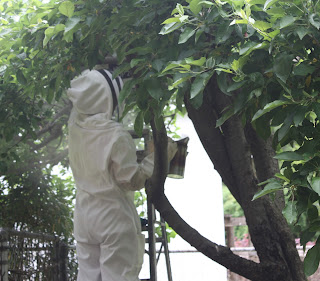 I know what to do. I just don't like any of my options.

They all involved me on a ladder with a swarm of upset bees, sharp pruners, and a fiery smoker. 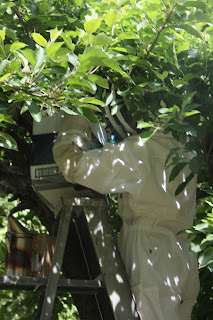 I was not feeling confident but not knowing how long they would hang around I needed to act. I donned my bee suit just in time for my daughter and son-in-law to arrive for an impromptu Sunday afternoon visit. My daughter found the entire scenario extremely entertaining.  After several failed attempts at lighting the smoker my husband got it going, I grabbed the box and headed up the ladder. The bees couldn't be conveniently placed on a limb which I could easily snip off and place in the box. No. They were on a large limb of the tree with involved me scraping them off with a soft brush into the box. 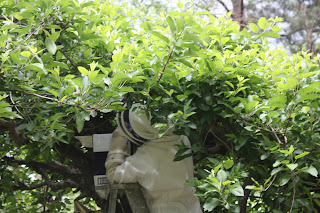 I tried to remain calm as I reached over my head, raking off bees most of which were landing on my bee veil before falling into the box. But it isn't like having hundreds of bees falling into your face is disconcerting in any way.  I was hoping to brush off nearly all of them but then I felt something...

inside my bee suit. Crawling on my stomach. I tried to ignore it but then realized I was feeling more than one.

I stepped down from the ladder.

Off came my gloves. I was about to remove my bee suit when my helpful audience (hecklers) shouted that there were a lot of bees on my suit. They made themselves helpful by knocking them off and I stripped my outer garment off.

I still felt something.

The bees were inside my clothing.

I leaned over shaking my shirt and pulling it up and nearly off to give the bee a way of escape. My daughter was laughing hysterically and I think my son-in-law is scarred for life.

I remembered that I had almost worn nothing under my bee suit. I was extremely happy I hadn't gone with that choice. I'm enough entertainment for neighbors as it is without adding an over the hill burlesque show to my repertoire. 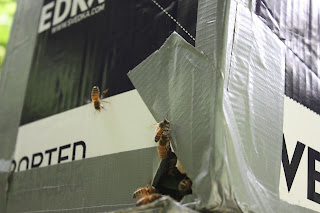 After a half an hour or so I went back to check on the situation. I'd left the box atop the ladder in hopes that I had the queen and the remaining bees would fly in. A few bees were outside the entrance, bottoms up, fanning their wings like mad.

This is bee code for "Hey y'all! The queen is in here!" 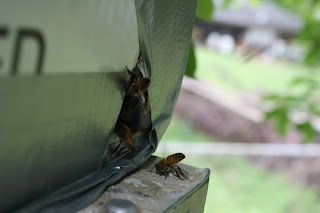 I went inside and left them alone. We went to a party where my bee story was greatly appreciated and returned home just as it was getting dark. My plan was to get more of the swarm if they were still on the tree. They were and I put my bee suit on again, and googled "catching a swarm at night." The more I read the more it sounded like a bad idea. 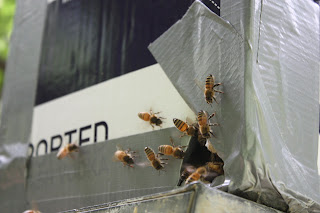 A ladder, pruners, a swarm of angry bees, in the dark. I decided to call it a day and reassess things in the morning. It certainly seemed like the main objective had been achieved: the queen was in the box. I hoped the remaining bees would follow... 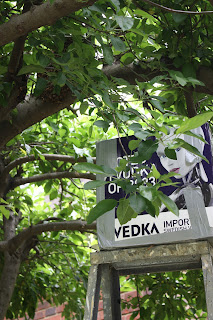 The next morning was cold and rainy. About half the swarm was still clumped together on that branch. Some of the duct tape on the top of the box had come loose overnight and bees were escaping. I opened the box to see how many were inside. 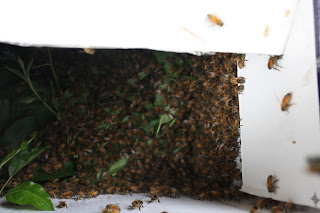 Okay. About half the swarm. I took clippers up the ladder and snipped off small branches with bees on them and dropped them into the box. 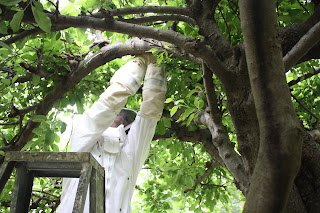 This time I taped up the box, put a sheet on the ground and made a ramp for the bees to climb up. This works with their natural urge to go UP. 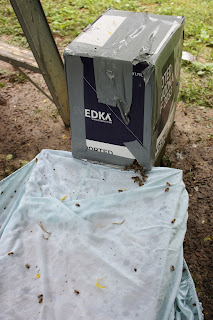 Eventually they did go willingly into the box. I still have a few stragglers on the tree but getting 75% of them was good enough for me. That's a lot to get done before breakfast so I went inside and sat down to order supplies for my new second bee colony. 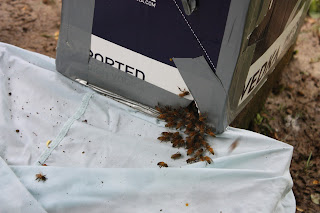 This entire process took longer than it should have because I kept watching Youtube videos of "how NOT to catch a swarm" and laughing hysterically. My favorite was of an Australian guy trying to shake them out of a tree. When the bees promptly flew from the box back to the tree, his friend who was videotaping his attempt said "So would you say that's not how to do it, then?"