Pests and Problems in the Beehive 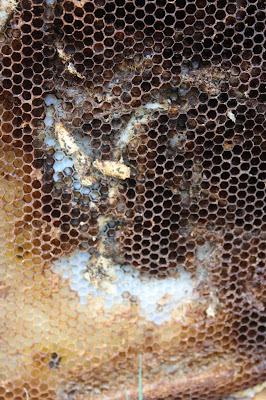 Remember in my post How To Get Over Your Fear of Beekeeping when I told you not to read too many scary things about things that can go wrong? Well once you've decided to keep bees and educated yourself about what is involved and maybe visited an apiary, then you are ready to look at some of the harsh realities of beekeeping in the 21st century. I say this because for the most part the things that will worry you the most and cause you the most trouble are new.

Often at meetings of beekeepers, you hear the old timers talk about how it used to be. They'd go out in the spring set up the hives, maybe add a super or two over the summer, and return in the fall to collect the honey. Let's just say that times have changed.

Modern beekeepers must contend with Colony Collapse Disorder, pesticides and herbicides, and  (depending on where you live) the small hive beetle. In my area the small hive beetle is the thing causing beekeepers to lose the most sleep. Here are the main things that you and your bees will have to contend with. Again, I'm writing this in the American South, in your country or region you may have different problems to deal with.

Let's start with the biggest and most scary, Colony Collapse Disorder. CCD is a new phenomenon first reported in October 2006. Beekeepers began reporting losing 30 to 90 percent of their hives. It's unclear what the exact cause is and it is possible that there are several factors at work. No dead bees are present unlike in a diseased hive, the colonies just disappear adding to the mystery. Since we don't know the actual cause there isn't anything a beekeeper can do to effectively prevent this except make sure that your hives are as healthy as possible. There are many things we can do to affect the health of the hive.

Tracheal mites: a parasite that lives and breeds inside the breathing tube of a bee. Some strains of bees are being bred to increase their natural resistance this pest and there are several in hive fumigants available for use.

Small hive beetle: a pest that came along with globalization, can take down an entire hive and destroy a honey crop. The bees have some means of dealing with containing these pests but opening the hive too often where they are present can disrupt the bees efforts and aid the SHB. There are several traps and deterrents available to help the beekeeper keep them under control.

Wax Moths: Wax moths are easily dealt with by keeping a hive strong and healthy. I did lose a weak hive to these pests last year and it is a messy clean up, but easily recovered from. You can see it in the picture at the top of this post. It is also important to properly store equipment when not in use to prevent the moths from getting a foothold.

Nosema a parasite that causes dysentery in honeybees.

Varroa Mites are a parasite that live on the bees, weaken them, and make them susceptible to disease. As an expert at our bee meeting put it "It would be like you having a tick the size of a basketball on you." They are visible to the naked eye so it's not difficult to figure out if your hive has a problem with them. So far, for me they haven't been an issue. Dusting the hives with powdered sugar is a simple way to deal with them. As the bees clean each other off they remove the mites in the process.

These are the major problems most often encountered by American beekeepers. There are ways of dealing with all of them and good hive management will either prevent or control most of them.

Even with all this remember, don't be scared! You can do this!
Posted by Michelle @Pen and Hive at 6:54 AM