"And finally, the nominees for 'Spring Fling Queen'! Regina George..." In this case the Spring Fling was half my bee colony following their queen (now named Regina George) and swarming to a nearby apple tree.  As the swarm saga dragged on, quotes from Mean Girls kept popping into my head. I successfully caught the queen and her little entourage in a box. (See yesterday's post) I was feeling pretty proud of myself for having such awesome beekeeping skills.

That skank was mocking me. But I didn't know it...yet. 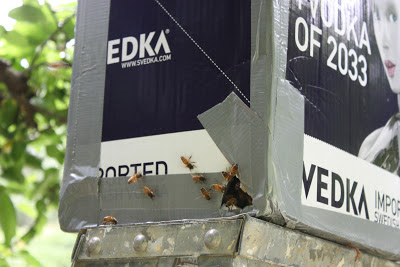 I left them in the box all day Monday while I ordered a lovely new home for them (I'm not just a regular mom, I'm a cool mom). On Tuesday however I got worried about them and decided to just split the hive I had into two hives and place the swarm and their queen into one with brood and honey, making sure not to mix in any queen cells which were on some of the frames. The moment I had accomplished this the FedEx guy delivered the new hive. Meanwhile, Regina and her swarm flew straight back up into the tree. Of course, they didn't just gather on one limb I could clip easily and cleanly. Oh no, they were hanging tight to the most gnarly bunch of twisted limbs that ever graced an apple tree. 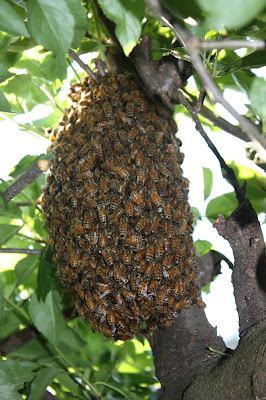 And evil takes (insect) form in Regina George. Don't be fooled because she may seem like your typical selfish, back-stabbing slut faced ho-bag, but in reality, she's so much more than that. She's the queen bee - the star, those other (twenty thousand) are just her little workers.

Okay, I can accept a minor set back. I got another box and collected that skank and her buzzing army again. Now... it was on.  I climbed the ladder to get close to the swarm. I cut off the branches they were clustered on one at a time and dropped them  into the box. I checked the opening at the bottom corner to see if any bees were fanning.

Not this time. I'm determined to win.

I went back up the ladder, found another tightly clustered group of bees, clipped the branch and dropped it into the box. I turned the box around and saw several bees around the opening fanning like mad. In a fit of frustration, knowing I had her and had won again, I scampered up the ladder brushing her remaining minions off limbs and branches while I told them what I thought of them. Loudly and with colorful language. Oh, no. It was coming up again, word vomit...

I got stung on my arm. Through my suit, which at this point I had had on for several hours. I was drenched with sweat underneath it and I smelled like smoke. I felt shaky and faint. These skanks were playing to win.


(Swarm member): Why are you dressed so scary?
Me: It's Halloween and I'm supposed to be a beekeeper. 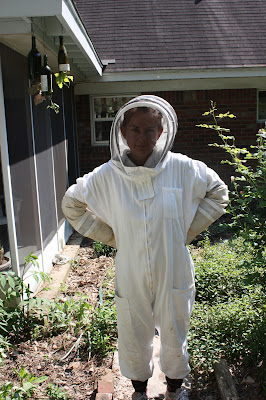 REGINA GEORGE
I love her. She's like a Martian!

The next morning I took the frames out of the new hive, put in one frame of brood (eggs which were laid by Regina) and went about dumping thousands of angry girls into their new digs. I was sure to turn the box over this time and open it from the bottom since the bees cluster at the top. I checked the box. There in between two pieces of cardboard that I hadn't taped together were a cluster of bees fanning furiously.  I couldn't believe it. I brushed and looked furiously for Regina but couldn't see her. She had outsmarted me. Notice the Heartwood box I was using. 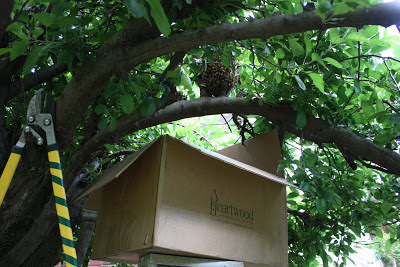 I just wanted so badly to get these bees in the new hive.  I had assembled, primed, and painted it in between tree climbing exploits. Why didn't she want to go in her lovely new house?  I was working so hard for her. When I related all this to my husband when he returned home he asked why I just couldn't let her go.

The weird thing about hanging out with Regina was that I could hate her, and at the same time, I still wanted her to like me.

I waited for the swarm to gather again on the apple tree. On a bigger limb. Back into my bee suit I went.

On Wednesdays we wear pink. Well, fine. Underneath the protective suit. 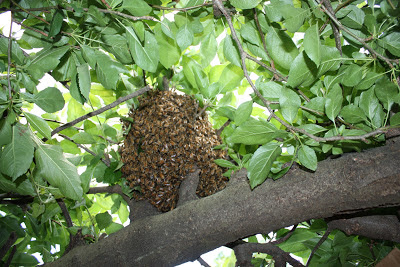 Regina: Oh my God, I love your bee suit! Where did you get it?
Me: Off the internet.
Regina: Vintage, so adorable.
Me: Thanks.
Regina: [after I walk away] That is the ugliest f-ing bee suit I've ever seen.

My husband arrived from errands just in time to see me on the ladder with the pruners. "Why can't you just let her go, you are destroying our apple tree."

He didn't get it. I had to win. I could not be beaten by a queen bee, especially a literal one. I caught the swarm a THIRD time and dropped them into a box. No queen. I went back up to try again with another box, a smaller one. 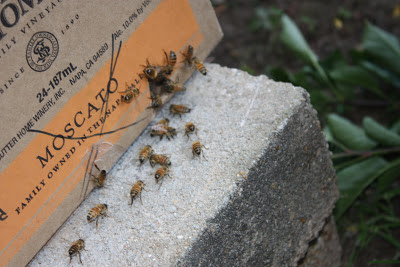 I dropped the main group of bees into it. That was it. She was in. In the photo above you can see bees with their tails up fanning furiously to signal their sisters where she is. This time I took the ENTIRE box and put it in the hive.

Regina George: Why are you so obsessed with me? 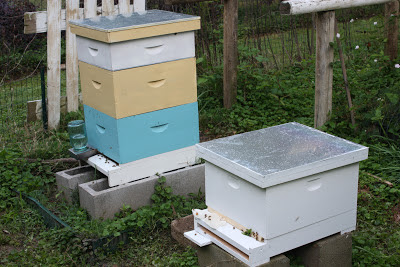 The next morning in a light drizzle I smoked the hive and poured the box of bees into the hive and replaced the frames. I blocked the entrance and felt victorious. Relieved.

Finally, Girl World was at peace. And if any freshmen tried to disturb that peace, well, let's just say we knew how to take care of it. 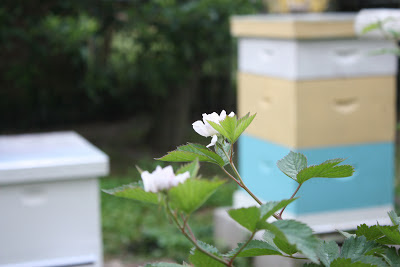