My First Visit to a Bee Yard

Yesterday in How to Get Over Your Fear of Beekeeping  I recommended that you take a field trip to an apiary. My local bee association plans a couple of these a year for those interested. Here's how mine went. Female beekeepers have their own issues...

I got up early on a recent Saturday for a field trip to the bee yard run by my local beekeepers association. I put my beekeeper's hat and veil on and it fell down over my eyes. Maybe I had it on backwards. I turned it around and looked in the mirror. That didn't look right either. I was glad my family wasn't awake to enjoy this awkward moment with me. I contemplated what to wear since I hadn't ordered my nifty bee suit yet. I put on a white shirt with long sleeves and tucked it into jeans. I dusted off my L.L. Bean hikers and tucked my jeans into my socks. I skipped my daily routine of orange coconut body cream and lavender moisturizer. I didn't want to seem too much like something a swarm of bees would be interested in. I skipped make-up too. Just to be safe. Besides who was going to see my face in the contraption I was wearing on my head? I did put lipstick on. 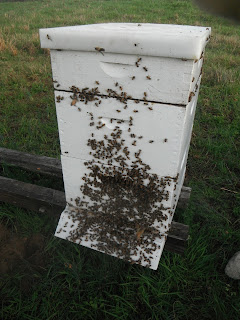 A girl has to draw the line somewhere.

I arrived at the designated meeting spot and met up with some other women new to beekeeping. We carpooled to the bee yard and donned our gear. An experienced beekeeper who tends the yard gave us a demonstration of how a smoker works. His was black and grimy. I pictured my shiny new one and wondered how many years he'd been doing this. We headed to the hives amid nervous chatter. He began to remove the covers from the hives and pull out the frames. 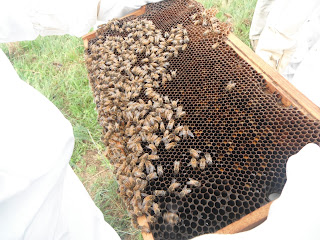 "Now, y'all see if you can find the queen in there."

He passed off that frame, then another, pointing out interesting things he saw. He handed off frame after frame.

"Now y'all don't drop it whatever you do!"

Someone carefully handed a frame to me. I gripped it tightly. I did not want to be the klutz who dropped the man's bee covered frame after his stern warning. It vibrated and hummed with action in my hands. I could feel it even through my thick gloves. Now up until this moment the beekeeping idea had been something I  wanted to do, but was also worried about. I'll confess to yelling for my husband to kill any bug that mistakenly finds its way into the house. I wondered how I would react to thousands of swarming bees. After several hives were opened up the bees were everywhere. In the air, swarming around us, they landed on us in clusters. One made its way inside my veil. I tried not to think of it crawling in my ear or stinging me in the eye. I calmly asked someone if they could see it, and they helped it find its way out.

Oddly, there was nothing unnerving about being surrounded by the bees, or having them crawl on me. The most upsetting thing about the entire experience was that I hadn't thought more about what hairstyle would be most practical..(.and no, it wouldn't bee a beehive).  It kept falling into my face and once you get the veil on, you tie it around your torso, which makes it impossible to mess with your hair.

Not having direct access to your own face is disconcerting. Suddenly your nose itches and you have something in your eye. Oh, it's your hair. Attempts to adjust hat, veil, and hair with thick gloves on only made matters worse. 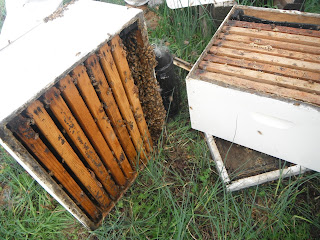 Now I know to employ all manner of pins, headbands, and scarves to prevent Hair Collapse Syndrome. A little known beekeeping malady.

This first visit to the hives was an important step. I looked at the frames carefully but only saw thousands of crawling bees. I had no idea what I was looking for or what anyone was talking about. The idea of trying to find the queen was literally like looking for a needle in a haystack. Did all the other new people know what we were looking at? I handed the frame I was holding to someone and stepped back to get the bigger picture. Seeing all the people, hives, and countless thousands of bees in the air made me feel as if I was doing something interesting and sort of brave.


The main thing I got from this experience was realizing that I could be surrounded by bees and have them land on me without being unnerved in any way. This was an important first step! It gave me the little boost of courage I needed to go forward.


And now after several years of beekeeping I do know what I'm supposed to be looking for on those frames and I can tell when there's trouble. You get to know your bees. Eventually it all seems like the most natural thing in the world.